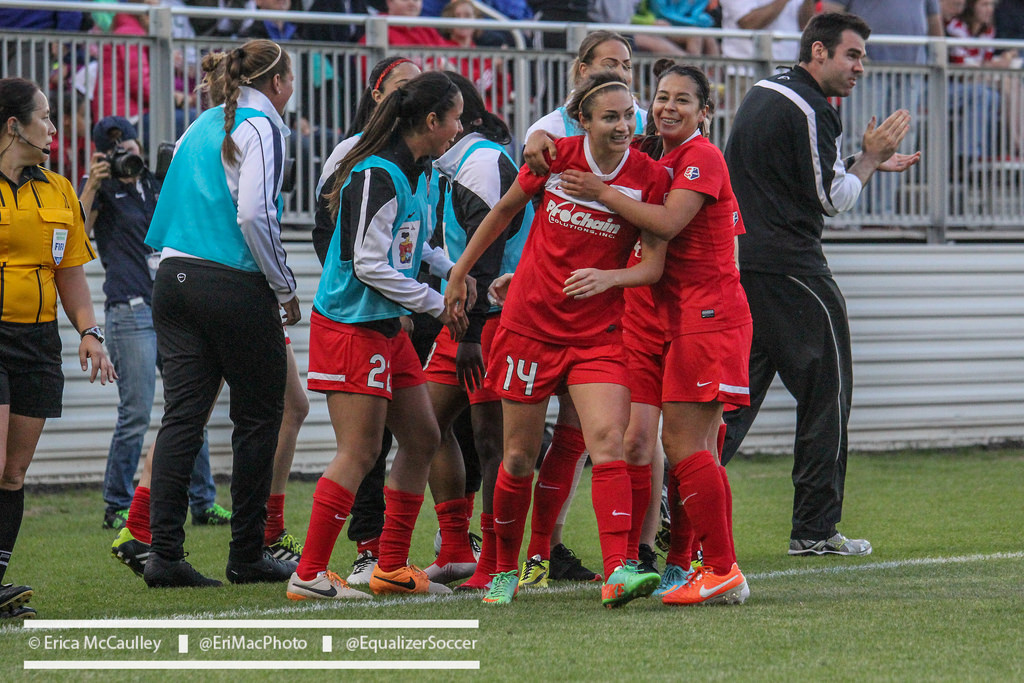 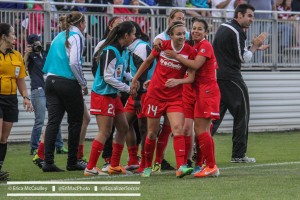 got the congratulations Saturday for the only goal in the Spirit's 1-0 victory over the Dash in Houston. (Photo Copyright Erica McCaulley for The Equalizer)

Jodie Taylor’s 7th goal of the season propelled the Spirit to an important 1-0 victory at Houston and into 3rd place on the NWSL table. Taylor scored against the run of play in the 62nd minute and Ashlyn Harris kept her sheet clean for the 3rd time this season. The Dash dropped their second straight and saw their playoff hopes reduced to little more than a pipe dream.

The goal came on a counter attack following some sustained pressure by the Dash. Ella Masar had a shot blocked by Tori Huster and Lori Lindsey picked it up and started a counter with a single touch to Lisa De Vanna. The Australian international took a few touches and found Jodie Taylor on the left side with tons of space left as the Dash defense became stretched out. Taylor cut inside on Marissa Diggs and hit a lofted shot over the onrushing Erin McLeod for what stood up as the only goal of the night.

The sides played a scoreless opening half despite trading chances just after a half hour. De Vanna got off a shot in the box on 33 minutes that McLeod tipped just enough to hit the inside of the post and out. On the next Dash build up, an energetic Kealia Ohai crossed from the right side and Masar ripped a shot that sailed just high.

The game marked the second time that No. 2 pick Ohai and college teammate and No. 1 pick Crystal Dunn shared the same field. More importantly for Dunn it was her first action since injuring her hamstring early in the Spirit’s June 4 win at Chicago. The match also marked the Spirit debut of longtime German international midfielder Kirsten Garefrekes.

The Spirit (7-7-1, 22 points) now sit 3rd, 2 points more than the Flash, Red Stars, and Thorns, all on 20 points. The Dash (4-9-1, 13 points) remain in 8th, seven points and four positions from a playoff spot. Both teams open July with Wednesday matches. The Spirit host the Breakers and the Dash are at Sky Blue.