NWSL Week 12 Preview: Solo a go for Reign, Wambach out 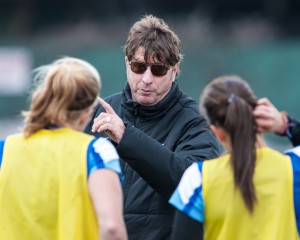 The first of three meetings between now and August 3 means the Breakers could have a lot of say as to whether or not the Flash reach the playoffs. The Flash have already ruled out Abby Wambach who has not played since spraining her knee June 11 in Houston. The Breakers list Julie King as doubtful meaning the center back spot they finally filled by moving King over from fullback is likely to come open again. The Breakers are not mathematically eliminated but it would take a near sweep of all remaining available points to for all intents and purposes they are playing to see what the team will look like in 2015.

What to watch for: The Breakers intended to sit and counter against Sky Blue last weekend but the tactic was quickly abandoned when they yielded a 1st minute goal. After they equalized they did sit 11 players behind the ball for much of the 2nd half and Sky Blue had difficulty breaking it down. A similar strategy could be fruitful against a Flash side that already has trouble building through midfield and will not have its main target player Wambach.

Following the Thorns’ midweek loss to Sky Blue, Paul Riley suggested they would in trouble for hosting a playoff match if they did not beat FC Kansas City. And to do it they will have to do something no team has done since May 14. The Blues are unbeaten in seven since then, the last five wins. The Thorns will also have to overcome being on short rest with travel while Kansas City last played at home a full week ago. And while the Thorns are clearly in a transitional state trying to integrate their new players, FC Kansas City are in full flight. A Thorns win will not jump them over FCKC but it will give them a clear path to do so based on matches in hand.

What to watch for: Sarah Hagen should be available for FC Kansas City and that could create some lineup issues for Vlatko Andonovski. After tinkering with a 4-4-2 earlier in the season, the Coach of the Year ultimately went with Jenna Richmond as a defensive midfield partner for Jen Buczkowski and returned to the more familiar 4-2-3-1. The results have been obvious. Hagen is a forward though and finding a spot for her could be a challenge.

It’s gut check time for the Spirit. Their five-match unbeaten streak has been blown to bits with three consecutive losses by an aggregate 10-1. They have had some upheaval in the back through injuries to players like Toni Pressley, Crystal Dunn, and Ashlyn Harris, and they’ll have to deal with the Dash’s unrelenting, high pressure style. The Dash are expected to unveil Meghan Klingenberg while Whitney Engen should make her 2nd start in central defense. Engen’s only Dash appearance this season resulted in their only clean sheet. When last they met the Erin McLeod saved a late penalty but Christine Nairn scored in stoppage time for a dramatic Spirit victory.

What to watch for: The big question about Klingenberg is whether she will play left back or left midfield. Left back looked like a sure thing before Stephanie Ochs dropped back there and began playing well. But Klingenberg’s midfield style does not necessarily mesh with the Dash’s shape. She is quick enough to control the entire side from the fullback spot so the smart money says that wherever she plays in this one, Klingenberg ultimately winds up at left back. With Arriana Romero quietly progressing into a very good right back the Spirit will need answers to stop the Dash from attacking from both wings.

It looks like Hope Solo will play after missing two matches and spending a weekend in jail since her last Reign appearance. The Reign were 2-0-0 with Haley Kopmeyer acting as her stand-in, but it is Solo who gives the club its best chance to win the championship and maybe even complete an undefeated season. They have had little trouble with Sky Blue this season, but Jim Gabarra’s side is 4-1-0 in the Pacific Northwest including a rather surprising 2-1 victory in Portland midweek.

What to watch for: Sky Blue’s midfield has been much better with Sophie Schmidt dropping into a more defensive role. She does a better job of redirecting the attack than anyone else who played there this season. The biggest test comes this match going up against Kim Little and the Reign’s bevvy of attacking styles. Sky Blue could also be dealing with Megan Rapinoe who did not play on the Reign’s recent road trip despite being along for the ride and who is clearly nearing her first match action since opening day.

Harris keeps pushing herself to excel in competitive US goalkeeping scene
Lloyd brace lifts Flash past Breakers, into third