Harris keeps pushing herself to excel in competitive US goalkeeping scene 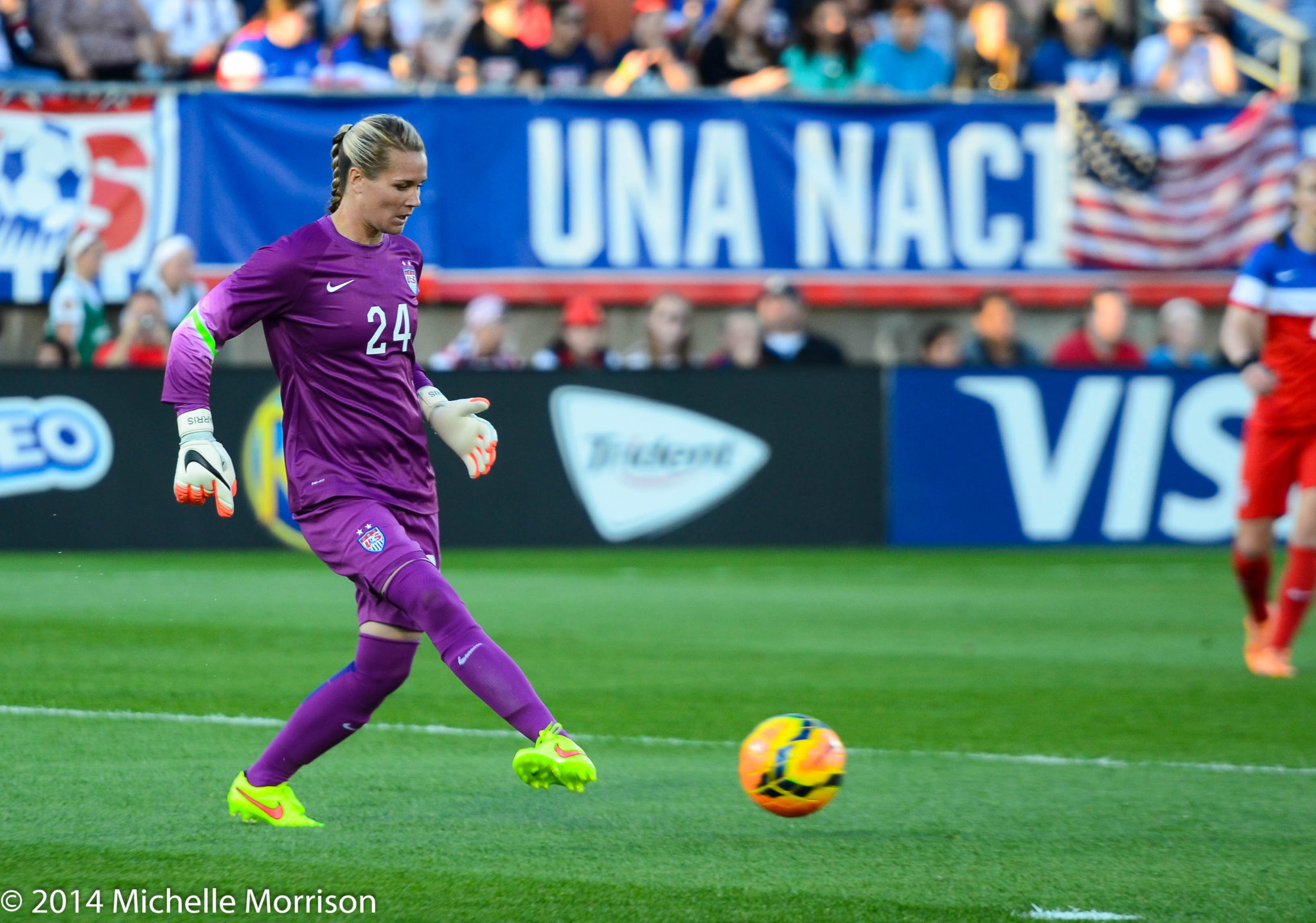 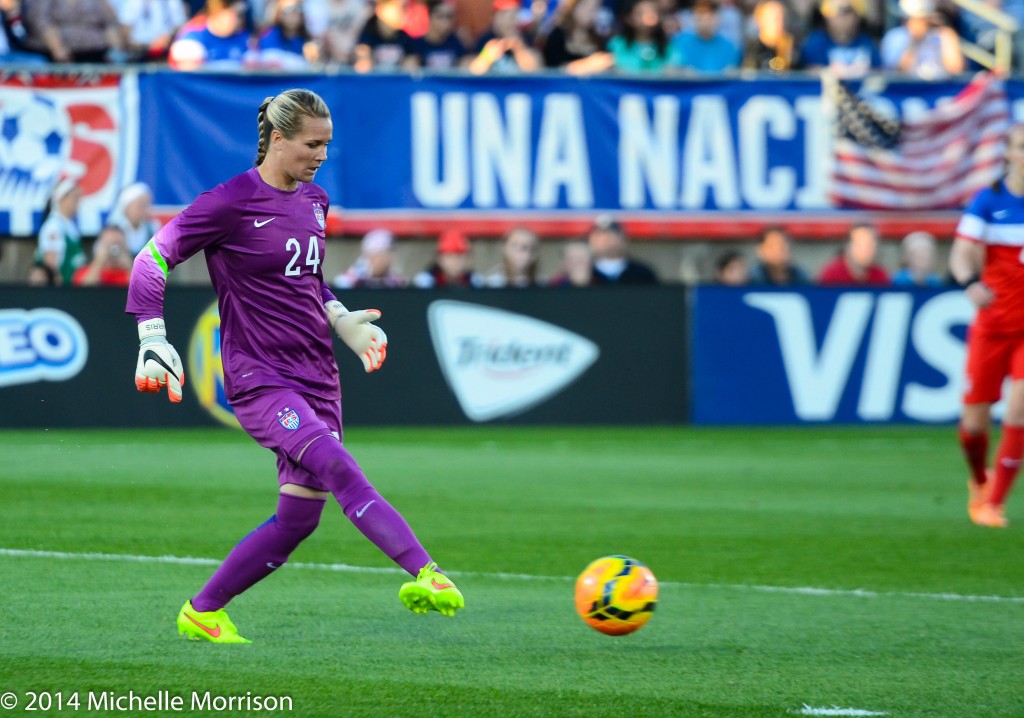 Ashlyn Harris made her third career start on June 19 in a 2-2 draw with France in East Hartford, Conn. (Photo Courtesy Michelle Morrison, The Soccer Desk)

TAMPA, Fla. – After climbing her way through U.S. Soccer’s youth national teams, goalkeeper Ashlyn Harris earned her third international cap at the senior level against France in a 2-2 draw on June 19th. In camp prior to the France friendlies, Harris was excited to be back with the national team, but said, “I haven’t made it yet.”

The U.S. women’s national team pool features five elite goalkeepers; 219 caps have been earned between the five, however, longtime starting goalkeeper Hope Solo has 152 of those, and longtime backup Nicole Barnhart has 54. In the opinion of many, including goalkeeper coach Paul Rogers, Solo ranks as the No. 1 goalkeeper in the world.

“Training with Hope everyday is a blessing for me,” Harris said during the United States’ recent visit to Tampa, Fla. “I learn so much from her and she takes me under her wing. She is helping me along my way, that’s a good feeling.”

Harris, 28, is in her second season with the National Women’s Soccer League’s Washington Spirit.

“She was a typical college goalkeeper with a fair amount of natural ability and raw talent,” Rogers said of Harris. “She was obviously very athletic, and coming out of college I think she was a bit unsure of what she was going to do with her career.”

Harris has a special relationship with Rogers. She credits him for molding her into the goalkeeper she is today. As both the St. Louis Athletica goalkeeper coach and U.S. goalkeeper coach, Rogers decided to take a look at Harris on the international level. He felt the transition was a big step for her.

Out of high school, Harris committed to play for legendary coach Anson Dorrance at the University of North Carolina. Before ever suiting up for UNC injuries plagued Harris. She suffered ACL tears two years in a row, as well as a major thumb injury. In 2006, she was able to come back and play the last part of the regular season for the Tar Heels. She won three NCAA titles at UNC.

In 2010, Harris became a regular call up for the senior level national team camps.

“I was so raw when I first met him.” Harris said. “I was super athletic but not good enough technically, not good enough mentally, and very inconsistent. He’s just hammering into my brain the last few years about being consistent and being hungry and just doing my job and doing it well.”

Harris made the decision to leave home and play overseas after WPS folded in 2012 – the second U.S. pro league to go under. She signed with FCR 2001 Duisburg in Germany. She played seven games for the club before returning back to the States to play in the newly formed NWSL.

Styles and techniques are different in each country. For field players, going overseas is fundamentally different. Learning new tactics, and playing a different style benefit those who choose to play in different leagues around the world. For Harris, it was an opportunity to slow down and work on being in more control.

“When I was in Germany, a lot was focused on power and explosiveness and technical ability. Technical, tactical, everything there is just very structured.” Harris explained. “It was a good balance for me because I came in and I was so athletic and I was so quick. That’s what American’s are known for. It was good to kind of take a step back and work on the things that maybe I wasn’t so good at.”

In 2013, Harris was allocated to the Spirit. For the first time in her career, a team she was a part of finished last in the league. Despite a head-coaching change midseason, the young Spirit struggled throughout the season. Harris struggled with the team’s results.

“It was a building year. I had to learn a lot about myself because it wasn’t enough to just show up every day,” Harris said. “I had to regroup and realize that I needed to point within and figure out what I could be doing to better my performances, my team, good communication and leadership.”

Following the disappointing 2013 NWSL season, Harris signed a short-term contract with Swedish Damallsvenskan powerhouse Tyreso. During her time in Sweden, she trained with the goalkeeper coach of the Swedish men’s national team. Harris was the first female he ever coached.

“It was phenomenal,” she said. “All he knew was how to train a male goalkeeper, so that’s what he did with me. I really learned a lot from him and even though it was three and a half months it was a good stepping stone for me.”

At Tyreso, Harris played alongside U.S. teammates Ali Krieger, Whitney Engen, Christen Press, and Meghan Klingenberg. The team also featured international superstars Marta and Vero Boquete. Before leaving for the NWSL season, Harris helped the team into the final eight of the UEFA Women’s Champions League, and Tyreso eventually lost to Wolsfsburg in the final.

The game against France marked Harris’s third start for the USWNT.

Harris is happy with her progress, but she is still hungry for the future. For Harris, of the biggest struggles has been the pressure. The pressure she puts on herself keeps her going.

“I have to be good; I have to be damn good,” she said. “I have so many other people chomping at my heels wanting to be in my position and I just have to keep being consistent and keep staying hungry. The biggest struggle is staying here.”

According to Rogers, Harris is fighting for the No. 2 spot right now. Along with Solo and Barnhart, goalkeepers Jill Loyden (10 caps) and Alyssa Naeher (uncapped) are in the goalkeeping pool for the Jill Ellis’ U.S. side.

“If you were to name the top 20 goalkeepers in the world, you would put Ash well in that group,” Rogers said. “She’s established herself as a top professional goalkeeper. It leaves me with tough decisions here at the national team level. She’s got a good future as an international goalkeeper.”

As Harris continues her growth – she says she is “just tapping into her peak – she credits Rogers with helping to push her to the next level.

“Paul demands a lot out of me,” Harris said. “He’s very attention to detail. If you come watch our training sessions, your feet your hands your knees your chest your butt, everything is broken down and the smallest margins make the biggest difference. We videotape everything we analyze everything. Not catching a ball clean is not good enough.

“He brings out a really good quality in all of us. He really focuses on our technique and training us like men. He hits the ball harder than probably most females will ever face and that’s a good thing. He does a great job of preparing us. That will help the team, that will help me, and that’s what’s been my focus.”

And with a goalkeeping pool as deep as the United States’ is, there will always be competition to push each other.

[Editor’s note: Interviews with Harris and Rogers were conducted prior to the June 14 match between the U.S. and France]

Gulati: USSF to speak with Solo soon about arrest
NWSL Week 12 Preview: Solo a go for Reign, Wambach out