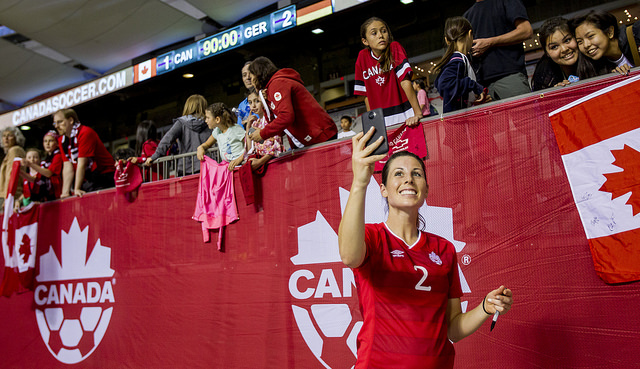 VANCOUVER, B.C – The Swedish Damallsvenskan league returns to action this week after a two-week break. FC Rosengård lead the table with a 8-0-1 record, while a surprising KIF Örebro sit second with a 7-0-2 record. Tyresö FF were forced to fold and this means that only one team will be relegated from the now 11-team Damallsvenskan League. Currently Jitex BK are in the drop zone as they sit last with an 0-0-9 record.

Canadian defender, Emily Zurrer is in her first full season with Jitex BK. The 26-year-old made the move to the Damallsvenskan because she did not have the best overall experience in the NWSL last season. Zurrer wanted a change of scenery, and a fresh start in Sweden was just what she was looking for.

“I love it there, I’ve always enjoyed my time playing in Sweden and it’s a great playing environment,” Zurrer said. “It’s a different style to the NWSL and North American soccer in general. I think it’s good to get a different perspective playing-wise over there and I’m really enjoying myself over there.”

On the pitch, Jitex BK have struggled immensely this season, and currently have a goal differential of minus-19. If they are to escape future relegation, Zurrer will have to use her leadership skills to boost the confidence of a young and inexperienced team. Zurrer has captained Jitex BK as they are still in search of their first points of the season.

KIF Örebro struggled in the early part of the season, but they have rebounded nicely, and now sit 3-points behind FC Rosengård. Marie-Eve Nault, and her fellow Canadian teammate, goalkeeper Stephanie Labbe have been a huge part of the teams early success. The 32-year-old left back credits some away fixtures as positive early turning point.

“We had a hard beginning of the season, but then we brought things back together. Now we’re sitting second for now. We had some big away games and big wins away.”

If KIF Örebro are going to win the Damallsvenskan they will have to get past Anja Mittag and FC Rosengård. Last season FC Rosengård were known as LdB FC Malmo, and they won 2013 Damallsvenskan title. In 2014 they feature the leading goal scorer after nine rounds of fixtures. Mittag has been on fantastic form and she leads the league with 9 goals. The German international is isn’t quite sure why she has been so successful.

“Good question, I don’t know. I just try to shoot, and keep on doing what I like to do,” she said.

While getting set to play Canada on June 18, at BC Place in Vancouver, the 29-year-old took time to talk about the Damallsvenskan and the trio of Canadians she faces on the pitch in Sweden.

“It’s good, especially when players from Canada play in Sweden. Canadian players are really aggressive so that is fitting to the Swedish league.”

Nault and KIF Örebro have played huge matches against Mittag over the last two seasons, and this year they knocked FC Rosengård out of the Swedish Cup. Nault believes she knows exactly how to shut down Mittag.

“I think when your physical with her she doesn’t like to be pushed around too much. We have some centerbacks that are definitely good at that, especially the young ones. I mean kind of putting a shoulder in just to make sure she has no time on the ball and no time to turn. I think that’s going to be a big thing for us.”

Tyresö, the former front-runner in the Damallsvenskan folded earlier this season and filed for bankruptcy. The ownership group of Tyresö spent money on big-name players that they simply could not afford. Players like Marta, Caroline Seger, and Lisa Dahlqvist all started this season with Tyresö and then became free agents during the season.

It could have been worse for women’s football if Tyresö had won the 2014 UEFA Women’s Champions League in Lisbon, Portugal on May 22. Wolfsburg was able to claw back and win a thrilling match 4-3. Mittag summed up her thoughts on the collapse of Tyresö with an honest assessment.

“That’s really disappointing, I felt kind of sad for Swedish soccer, and sad for all the player who’ve played there. It’s really stupid,” Mittag said.

Nault, the former Tennessee Volunteers player is hoping that the owners of KIF Örebro are more financially responsible with players signings, and overall day-to-day costs.

“It’s just unfortunate to bring back so many good players but then to go and file for bankruptcy. I think it’s maybe not the right idea. I think that our owners (KIF Örebro) might be just a little smarter and not putting money that you don’t even have towards other players. They tried it and they had a great run in Champions League so good for them, and now unfortunately they’re not in the league anymore.”

Personally Zurrer sees a positive side to the downfall of Tyresö as she looks at the bigger picture this season in the Damallsvenskan.

“We played them before they folded,” Zurrer said. “It’s sad because they were a really good club and they had some world-class players. Unfortunately it wasn’t managed very well, but I think they had a great run while they were still a team. It’s actually good for us (Jitex BK) that they folded because it means only one team gets relegated in the Damallsvenskan. Selfishly we’re happy about it but it’s unfortunate for them.”

When owners go out and sign big-name players that they can’t afford it often puts the survival of that team and entire league in jeopardy. With women’s football still growing and becoming stronger each and every day, it’s a step backwards when a team folds.

Zurrer is not worried that a financial crisis could strike her Damallsvenskan club, Jitex BK.

“It’s always interesting in Sweden. I think it’s common for Swedish clubs to have financial problems but I don’t think any of us (Jitex) are really in that dire of situation that Tyresö was in. I know focusing on getting sponsors, and getting people out to games is important.”

Perhaps Mittag has the most logical and simple solution to ownership overspending.

“Do not spend so much money, maybe just spend money you have and not as much as you can spend,” she said.

Zurrer and her Jitex BK squad are back in action as they will host FC Rosengård on Tuesday, June 24. Nault and Steph Labbe’s KIF Örebro side are also in action on the same day as they travel to play Kristianstads DFF.