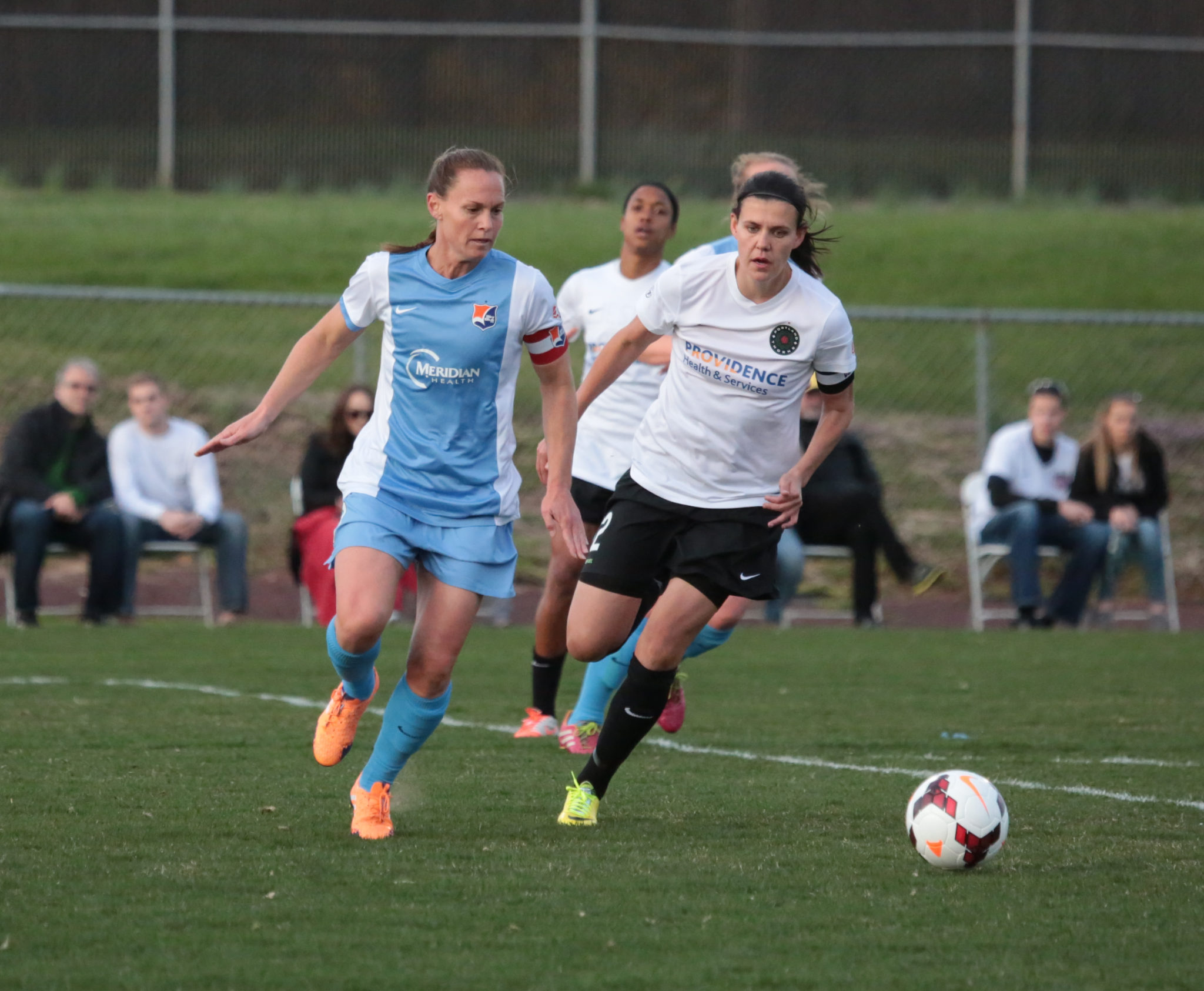 For the second time in less than five weeks Sky Blue FC went to Portland and emerged a surprise winner.  Goals by Katy Freels and Lindsi Cutshall did the trick Wednesday in a 2-1 victory, Sky Blue’s first since winning 1-0 on May 24.  Christine Sinclair scored for the Thorns, and then put a scare into the Riveters when she limped around for the final 10 minutes after appearing to injure her right ankle.

Jim Gabarra elected to start Brittany Cameron in goal even tough Jill Loyden’s best NWSL performance came in the May 24 win on the same pitch.  Cameron came up with an enthralling performance.  She knocked down a wicked free kick hit through traffic late in the 1st half and robbed Alex Morgan late with an acrobatic save.  In between Cameron controlled the match with her usual forays off her line, may of which denied Morgan shots on goal.

Cameron was given an early lead in the 8th minute when Freels emerged with the ball after Allie Long fell down trying to receive Nikki Marshall’s pass out of the back.  Freels took two short touches and then lofted a chip that beat Nadine Angerer even as the German goalkeeper was standing barely above her six-yard box.  The goal was Freels’ team-best 5th of the season and appeared to push the Thorns back on their heels for a bit.

The Thorns had things moving better by the end of the half and nearly tied it on 29 minutes when Allie Long was fouled a step outside the area.  Veronica Boquete found a seem in Sky Blue’s defensive wall but Cameron was up to the task and the rebound was put wide.  The Thorns came buzzing out of halftime and Boquete acted as playmaker in the 54th minute after Sarah Huffman played a quick throw-in .  As Sky Blue defenders looked to be still settling into position Boquete took the throw in a dribbled along the goal line and slipped a pass through to Sinclair.  The Canadian’s tap-in finish was her 3rd goal of the season.

Sky Blue regained the lead 10 minutes later.  Christie Rampone drove a free kick into the box and Cutshall got her head to it first, easily beating Angerer who stayed home on the play and had little reaction time with which to make a save.  Morgan fired wide on a would-be equalizer less than a minute later, and Sky Blue held on the rest of the way to improve to 3-1-0 all-time at Providence Park.

Sky Blue (3-6-6, 15 points) are now unbeaten in three and up to 7th in the table.  They will try to sweep the Pacific Northwest swing for the second straight year when the visit the undefeated Seattle Reign FC on Saturday  night.  The Thorns’ (6-5-2, 20 points) two-match win streak ended and they will travel to Kansas City for a Saturday evening tilt at Durwood Stadium.

Gulati: USSF to speak with Solo soon about arrest
Solo apologizes for arrest, set to play on for Seattle