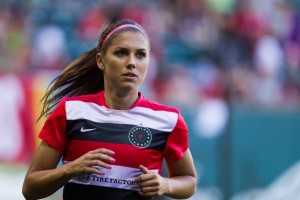 Alex Morgan and second-half substitute Jessica McDonald scored braces as Portland Thorns FC’s 6-1 rout of the Washington Spirit on Saturday at the Maryland SoccerPlex. The Thorns have now won two games in a row, both versus the Spirit, after losing to the Western New York Flash 5-0 two weeks ago.

The Thorns took advantage of some early miscues by the Spirit on Saturday night. Washington started new additions Niki Cross and Alex Singer hoping to find some stability on the backline, but stability didn’t come for the Spirit.

Morgan’s two goals come just 48 hours after scoring twice off the bench for the United States in a 2-2 draw with France, her first goals for the national team in over a year.

“I knew those first goals (with the national team) were really going to kind of set me free mentally and just put me more at ease and that’s what it did,” Morgan said postgame,  “Today I just felt like I was playing for freely and a little bit more confidence. Mentally, I’m not thinking about my injury anymore so I think that’s the biggest thing moving forward.”

In the 5th minute, Ali Krieger sent an errant pass to Cross, whose subsequent pass was intercepted Morgan. Morgan found Christine Sinclair, and Sinclair’s shot hit the crossbar and went in for the opening score.

Portland doubled its lead in the 11th minute. Robyn Gayle fouled Morgan from about 30 yards out, and on the ensuing free kick the ball bounced around like a pinball before Morgan headed it in. The Thorns took a total of four shots in the sequence and the Spirit defense made two saves off the line.

[MORE: Morgan back to what she’s ‘supposed to be doing — scoring goals]

The Spirit played better for the remainder of the first half, and in fact had the better of possession during stretches. Nonetheless, the Spirit were unable to find the back of the net. One of the Washington’s better first-half chances came in the 35th minute. Gayle stole the ball at midfield and found Lori Lindsey, who then laid it off to Taylor, but Taylor’s shot was saved by Thorns goalkeeper Michelle Betos.

Washington got one back in the second half. Christine Nairn hit a low driven shot passed Betos for the Spirit’s lone goal of the evening in the 62nd minute.

But the Thorns went on to score four unanswered goals. In the 70th minute, Morgan scored her second off a terrible clearance by goalkeeper Chantel Jones. The ball fell to Morgan, who slyly chipped Jones for the score. Soon after Morgan’s second goal, the Spirit switched to a three-back formation subbing, Danesha Adams on for Singer. The three-back formation seemed to multiply the Spirit’s woes.

After the game, Spirit head coach Mark Parsons admitted switching the formation was a mistake.

“Going back I don’t think that helped us I think it hurt us,” he said. “So as we went 3 in the back we lost our rhythm and they looked more dangerous. I don’t see any individuals out there switching off… I didn’t help us there with the shape.”

Parsons’ counterpart made a strategic move that may have facilitated his team’s win.  Paul Riley put Rachel Van Hollebeke on at half time in place of Stephanie Catley and moved rookie Emily Menges to outside back in anticipation of Lisa De Vanna coming on a halftime for the Spirit.

McDonald, who subbed on for Morgan in the 82nd minute, scored a brace on her own in a span of less than three minutes. McDonald’s first goal came in the 84th minute. Jones was able to make a save on the initial shot taken by Sinead Farrelly, but the rebound fell to McDonald. McDonald scored again in the 87th minute via a well-placed cross from Sarah Huffman.

The final tally of the night came in stoppage time. Allie Long got loose and fired a shot. Cross was able to block it but the rebound fell back to Long, who then finished from about six yards out.

“We’re not doing anything different than we did 6 weeks when we couldn’t win a game so you know it’s just the way  the season has gone,” Thorns head coach Paul Riley said postgame. “Everyone is starting to get really fit and starting to know each other and obviously integrating Vero into the lineup has been a big plus for us. Hopefully we just keep pushing on from here.