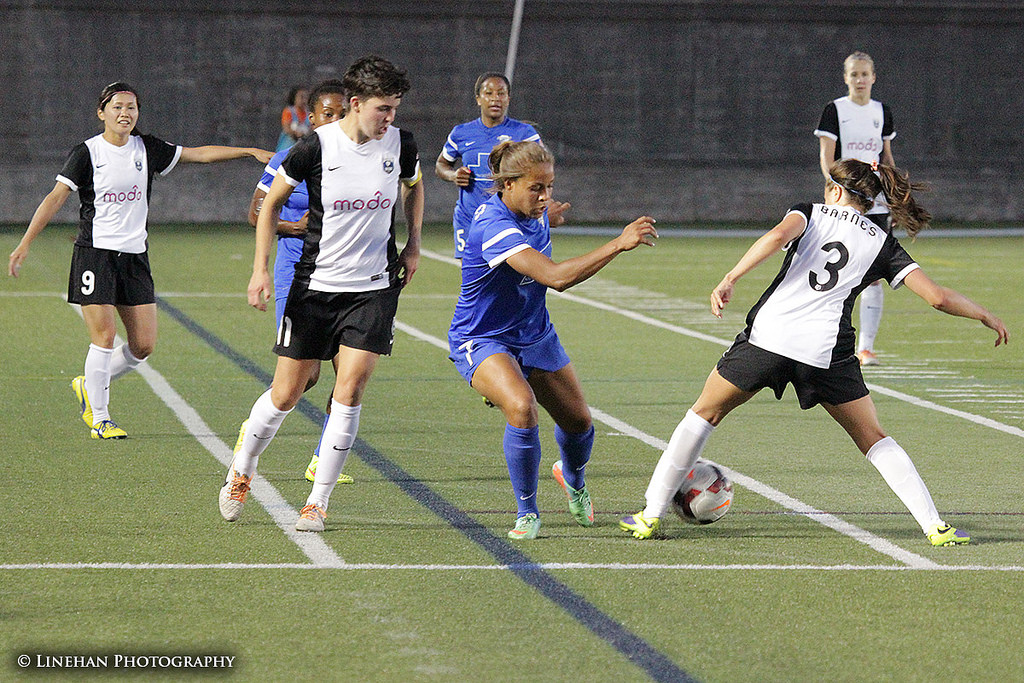 Seattle Reign FC are halfway to an undefeated season following a 2-0 away victory over the Boston Breakers on Thursday night.  Beverly Goebel and Keelin Winters scored 1st half goals to lift the Reign to 10-0-2 while the last-place Breakers slipped to 3-9-0.

The Reign had been dormant for 11 days and played this one without their regular goalkeeper, left back, and two-thirds of their dynamic midfield.  Still they took barely 90 seconds to get on the scoreboard thanks to a solid effort play by Mariah Nogueira.  The former Breaker, making her first start of 2014, outfought Joanna Lohman for a ball in the attacking third and sent a chip in the box in the vicinity of Bev Goebel.  Cat Whitehill appeared to have positioning for the clearance, but Goebel outfoxed her to get off a shot that easily beat Alyssa Naeher to the far post.  The goal snapped a four-game stretch during which the Reign conceded the first goal.

The Reign doubled up in the 25th minute after another hustle play by Nogueira earned a corner kick.  Nahomi Kawasumi’s outswinger went to the top of the 18 where Winters stood unmarked.  She headed the ball down and it landed in front of Naeher who allowed it to skip by her for one of the soft her goals against in NWSL this season.

From there the Breakers rarely looked like they would threaten the Reign’s unbeaten run.  Haley Kopmeyer made a few quality saves and got some help from Elli Reed, who cleared a ball off the line in the closing minutes to help Kopmeyer earn her first NWSL win and clean sheet.

The Reign traveled Megan Rapinoe and listed her as questionable, but in the end she was not included in the nightly lineup.  She will move with the team to Western New York where the Reign will play Sunday against the team that came closest to beating them.  The Breakers are heading to New Jersey for a season rubber match against Sky Blue FC, who lead the Breakers by a point for the dubious honor of staying off the bottom of the NWSL table.

Morgan, back in US camp, says she’s fully healthy, focused on fitness, team chemistry
Morgan scores twice for first goals in over a year as US women tie France