Angerer happy in Portland, focused on getting Germany prepared for World Cup 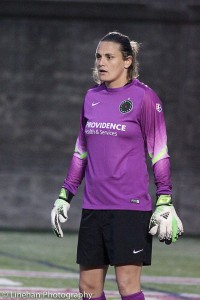 Nadine Angerer is happy in Portland and looking forward to Wednesday's match vs. Canada. (Photo Copyright Clark Linehan for The Equalizer)

VANCOUVER, British Columbia — Germany goalkeeper Nadine Angerer is on top of the world and enjoying exactly where she is in her professional football career. The 35-year-old has had a storybook past 12 months that saw her win the European Championship, sign with Brisbane Roar FC, win the 2013 FIFA Player of the Year award, and ultimately make a move to the NWSL to play with the Portland Thorns.

Angerer has her sights on playing in the 2015 FIFA Women’s World Cup, but before that she took a moment to reflect on what an amazing year she has had.

When she first started playing football at a youth level, Angerer did not start out in net. She dreamed of becoming a top striker, however that would not be in the cards. Angerer received some life-changing advice from former Germany national team coach Tina Theune that would pave the way to her long and successful career.

“I started quite late, I think when I was 15 or 16,” Angerer said. “I was a forward playing in my regional team, Bavaria. My former national team coach, Tina Theune, she said to me, ‘I think you maybe won’t make it as a forward, but I think you can become a world-class goalkeeper.’ She saw my talent.”

In her first season with the Portland Thorns her new team have a 5-4-2 record and sit 5th in the league table. Angerer has started 10 matches and she has performed great as she gets adjusted to her new surroundings. She is really enjoying her time in Portland and she predicts brighter things to come from the Thorns in the second half of the season.

“I love it, I really really love it,” Angerer said. “We started okay in the season, and then the last three games we didn’t play good. We earned to lose, we played very poor, but still we have a very good team. We talked about it a lot, and we know really well what we have to work on. Actually we finally won, 2-0 so I’m pretty sure we’re going to reach the playoffs. We have such a great character in the team, such a team spirit, and actually the most important thing is we have quality in our team.”

The NWSL is starting to attract more and more players from Europe. Angerer’s former German international teammate, Kerstin Garefrekes, joined the Washington Spirit on loan last week, and Spanish midfielder, and Thorns teammate Veronica Boquete scored on Saturday in her second match with Portland. The NWSL is gaining attention overseas, and that’s great for the long-term health of the league. Angerer has noticed a few differences between the NWSL and the Frauen-Bundesliga.

“I think the biggest difference is the athletic point. All the games played in the NWSL felt like it was so fast, and it’s very physical compared to the Europe leagues, especially Germany. I think the game in Europe, in particular Germany it’s more tactical, more technical. We are very smart in Germany, we’re very good at working together as a team and we are very tactically smart. In America they are so fast, and so physical, but sometimes I think they do so much unnecessary things. Still I think it was the perfect time for me to come to the U.S. to get to know this kind of style.”

When Angerer returns from international duty she won’t be playing in the next Portland match on June 21, against the Washington Spirit. In her last match, on June 11, Angerer was issued a controversial red card against the Western New York Flash. Replays have shown that Angerer did not foul or even touch Flash forward Samantha Kerr. Angerer does not place blame on the referee that sent her off, but instead she gives credit to her opponent for her ace embellishment.

“For sure it wasn’t a red card. I think the video evidence shows that I didn’t touch her, but that’s how it is, it’s sports. Of course I was very angry in the game because I didn’t touch her. I think the forward did a great job pretending that I fouled her. That’s how it is and I don’t blame the ref because everybody does mistakes. It was a very bad moment, but it is how it is and now I’m suspended for two games.”

On Wednesday, Angerer and Germany will play Canada at BC Place. Christine Sinclair and Angerer have not made any side bets involving British Columbia Salmon or German bratwurst, but they are both excited to play against each other. Sinclair and Angerer are among the top performers in each of their positions and they both had glowing compliments for each other this week.

Sinclair wasn’t about to reveal the key to scoring on Angerer, but she was more than willing to talk about how much her Thorns goalkeeper has impressed her since they’ve joined forces in Portland.

“I play with her in Portland so I’ve got a few secrets,” Sinclair said with a laugh. “After the first week of training with her she’s the best goalkeeper I’ve seen hands down and it’s shockingly natural for her. I’m happy for Nadine winning Player of the Year, as a goalkeeper that doesn’t happen ever.”

If Sinclair is awarded a penalty kick on Wednesday, the edge should go to the FIFA Player of the Year. Angerer stopped a pair of penalties in the Euro 2013 final match against Norway last summer. In an NWSL match on May 14, she turned aside Sinclair’s international teammate, Kaylyn Kyle, from the spot. Angerer does not get rattled in high-pressure situations and she is as calm as ever during any penalty scenario.

“I’m just following my intuition and then I try to wait as long as possible and then I go 100 percent in one corner or sometimes I just stand and wait in the center and I don’t jump in the corner. Everything is possible,” she said.

Angerer has no plans to put away her goalkeeper gloves. As long as she continues to improve, get better, and continue to enjoy playing football she is going to play as long as she can. Angerer will turn 36 on Nov. 10, and at this very moment she believes that she can still keep improving her game.

“Absolutely, that’s why I’m doing this sport. I think for me or in general in sports, it is important that you practice and you feel that you can still continue to improve things. I’m 35, but I still I like the feeling that I improve, that I’m fit and that I feel improved all the time. I think it never stops.”

Germany hosted the 2011 FIFA Women’s World Cup, and in that tournament the host team bowed out in the quarter-finals. Germany went 3-0-0 in the group stage before disappointingly falling 1-0 to Japan in extra time thanks to a 108th minute goal from Karina Maruyama. Led by Silvia Neid, Germany is still a deep team with plenty of talent, and special players. According to Angerer, this current team is not as old as the one that played in 2011.

“It’s a younger team. We’ve got so many new players on the team and they are amazing. They have amazing characters and of course we are not as experienced as the 2011 team, but we have a good team spirit. They’re so talented and they have so many good skills.”

If Angerer could offer any bit of advice to the 2015 FIFA Women’s World Cup host country and organization committee it would be to change the playing surface. Abby Wambach, has been a strong opponent against the use of artificial turf, and Angerer made her feelings known when discussing what advice she would give Canada.

“First of all I would change the pitch. I don’t know why we have to play on turf and I really, really hate it. I don’t understand it and I think Canada should be able to give us grass.”

Whether it’s grass, artificial turf, or a surface of pebbles, Angerer is at the top of her game and continuing to be the best player at her position. She has plenty to offer for her club and country and she’s not anywhere close to slowing down.