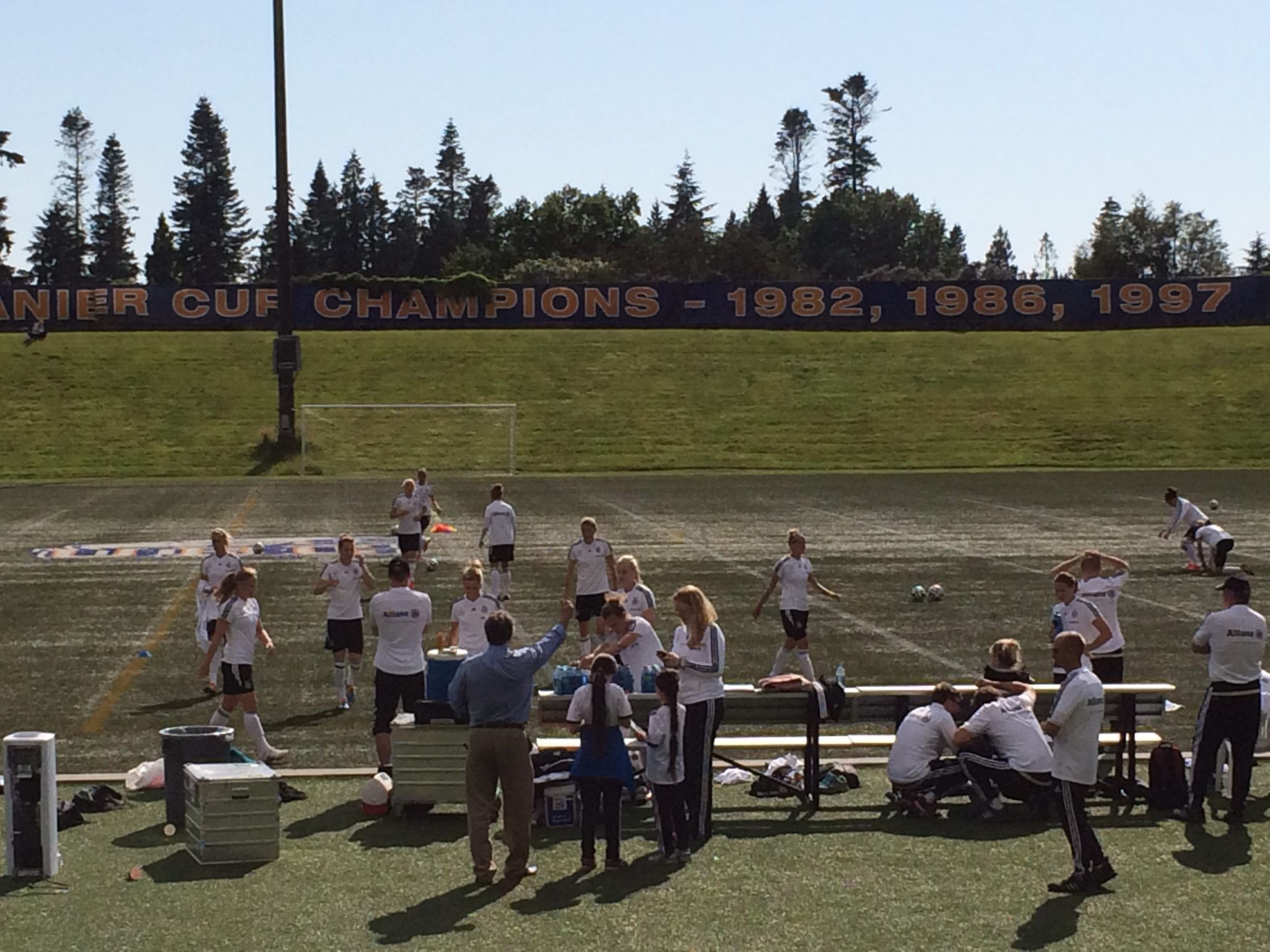 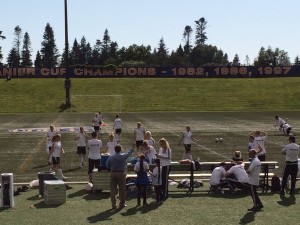 Germany trains on turf ahead of Wednesday's meeting with Canada. (Photo Copyright Harjeet Johal for The Equalizer)

VANCOUVER, British Columbia — Canada will host Germany in an international friendly on Wednesday, June 18 at BC Place in what will be a huge test for Canada. Germany is considered one of the powerhouse teams in women’s football. The latest FIFA rankings have Germany at No.2 and Canada ranked at No.7. The home side is treating this match as a measuring stick against a strong opponent, while the visitors have a slightly different take on the match altogether.

Silvia Neid’s team arrived in Vancouver last Thursday and they are calling this match and trip to Vancouver a scouting mission. The players and coaching staff see this opportunity as a scouting and information gathering trip as they try to put themselves in a greater position to succeed at the 2015 FIFA Women’s World Cup.

Nadine Keßler scored 12 goals for VfL Wolfsburg this past season and she sees Wednesday’s match as a chance for Germany to improve.

“We want to improve the way we are playing,” she said. “We want to be strong in our tactics, and we want to be a strong opponent for the Canadian team. We want to move on and become better for the World Cup next year.”

The Frauen-Bundesliga season has recently concluded and this is the perfect time for Germany to be in Vancouver, and experience the city, BC Place, and prepare for next June. The fans can feel the excitement building and so can the players. Keßler feels like the World Cup is getting closer and closer, and being in Canada right now adds to that.

“It feels like it’s coming closer,” she said. “Our sense while we are here is to get to know about Canada, to get some experience, and to be prepared for the next year.”

Canada forward Christine Sinclair understands exactly why Germany is treating this match as a scouting mission. Canada was in the same boat when they looked to succeed at the last World Cup, which was hosted in 2011 by Germany.

“All these teams that are hoping to qualify for the World Cup, they want to play in the venues that they’ll be playing the World Cup in,” Sinclair said. “We’ve been through the same thing so I hope they enjoy it.”

Germany has practiced twice on the turf at the University of British Columbia, and on Monday they got their first chance to train on the turf at BC Place. Germany is not used to playing on turf and they want to get best acclimated to that type of surface. The 26-year-old Keßler is not sure what challenges playing on turf will bring.

“I’m not quite sure. In a way it’s new to us, but we hope the artificial ground will be perfect.”

While speaking at the one-year to the FIFA Women’s World Cup event on June 6 in Vancouver. Canada coach John Herdman boldly predicted that hist team would play the USA in the final match. Realistically Germany, and the U.S. have a far greater likelihood of meeting in that final match. Germany is dominating Group 1 of UEFA World Cup qualifying with an 8-0-0 record and a goal-differential of plus-53. Silvia Neid’s team has acres of talent that Canada can only dream of having.

Germany has traveled to Vancouver without injured players Celia Sasic, Fatmire Alushi, Saskia Bartusiak, and Leonie Maier. Even without those players, they still have a deep roster and an extremely competitive team.

Nadine Angerer is the current FIFA Player of the Year. She was tremendous in helping Germany win the 2013 European Championship last summer in Sweden. Angerer has kept up her play by joining the Portland Thorns this season.

FC Rosengård striker Anja Mittag currently leads all Damallsvenskan players with nine goals this season. Striker Alexandra Popp is an up and coming player for Germany and she scored 10 goals this season for VfL Wolfsburg.

Sinclair is still the most dangerous attacking player for Canada. Offensive tactics will always go through her as long as she’s wearing a Canadian kit. Sinclair is looking forward to the test Germany will offer.

“I’m excited. They offer a different test and they’re one of the favorites heading into the World Cup. It will be good to see where we are right now.”

On May 8, in Winnipeg, Manitoba against the No.1 ranked United States team, Canada played a great match and came away with a 1-1 draw. That was a positive result for Canada and something they will look to build on vs Germany. Midfielder Kaylyn Kyle sees that match and Wednesday’s clash against Germany as opportunities for Canada to continue to grow and evolve against some of the best teams in the world.

Canada played Germany in Paderborn on June 19, 2013. Leonie Maier scored the only goal of the match as Germany prevailed 1-0 in front of 9,781 spectators at Benteler Arena. Kyle started that match and played 70 minutes for Canada. The Houston Dash midfielder is treating this match as a potential World Cup match.

“Anytime you can play in a home venue against a World Cup team you obviously treat it like a (big) match,” she said. “I think we do have a little bit of an advantage here. Obviously having teams come into play and us playing in Winnipeg and now in Vancouver. Everyone that comes in you treat it like a World Cup match.”

Tactically, Germany will look to hold the ball, keep possession, and make Canada come to them. The players Herdman selects will have to be patient and careful with aggression. Germany plays a structured, disciplined style of football that Kyle believes is different that what the U.S. offered in Winnipeg.

“I think defensively they’re a little bit more structured, they play a really good block and they’re pretty tough to break down. It’ll be a really good match.”

Sinclair is well aware of the strong team system Germany plays. Any small mistake could cost Canada a goal and they can’t afford to get behind early against a team that likes to hold the ball and keep possession. The recently turned 31-year-old Sinclair spoke highly about the German system.

“First and foremost they’re soccer players, they understand the game and they’ve been playing the same system for years,” Sinclair said. “They’re just quality soccer players all over the field. They’ll punish any mistake we make.”

Germany will be the toughest team Canada will play at home before the 2015 Women’s World Cup. If they can go out and get a result, Canada will gain a huge boost of momentum, and confidence. Herdman has his team believing that they’re a team that can cause damage next summer and this match could be a great building block toward that.

Four Caribbean teams advance to next round of CONCACAF World Cup qualifiers
The Equalizer partners with Soccerly, continues growth of women’s soccer coverage