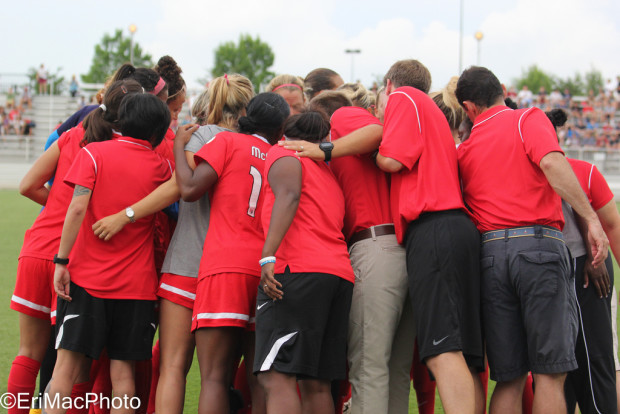 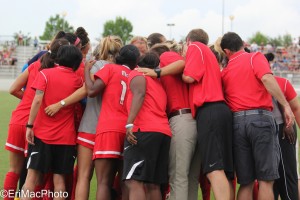 With several players missing this weekend, the Spirit (above) and other clubs will need team efforts to earn points. (Photo Copyright Erin McCaulley for The Equalizer)

Two teams riding high meet in Houston sans their main U.S. and Canadian internationals. That is far more of a disadvantage to FC Kansas City who will be without their best forward, midfielder, defender, and goalkeeper. Last time they played the Dash scratched out a 2-2 draw, overcoming Erika Tymrak hitting one of the great NWSL goals to come up with two equalizers. The Dash have won three straight and are trying to latch on to the playoff pack while the Blues are up in 2nd place but concede games in hand to the entire league.

What to watch for: It took more than a season and a quarter but Tiffany McCarty is finally finding her stride as a dangerous NWSL striker who can score goals. And she can produce facing the goal or as a target. That will put pressure on a KC defense that won’t have Becky Sauerbrunn and may not have Jen Buczkowski who has a left groin strain and last weekend missed her first minutes ever in the league.

After being rebuffed by the league-leading Reign, the Red Stars will look to get back on track at home against reeling Sky Blue FC. The chance is there for the Red Stars to put a stranglehold on a top four spot and they will likely look at this as a match they should get three points out of. Sky Blue were frustrated after being beat down at home by the Dash last weekend. Their season is a half-step away from ruination. The Red Stars will not have Julianne Sitch, serving the first of a two-match ban for elbowing Keelin Winters.

What to watch for: When last they played Sky Blue had a world of trouble defending balls over the top to the speedy Jen Hoy. With no Christie Rampone due to national team duty it will could be a long afternoon for the Sky Blue defenders unless they can cut off service to Hoy. They’re also desperate for a quality performance from the midfield.

The first of a home-and-home is a key stretch for both sides. The Thorns will need all six points to pass the upstart Spirit, and the Spirit can solidify their position in the table with as little as four points or even a split. Unfortunately key players will be missing for this one, notably Ali Krieger and Diana Matheson for the Spirit and Nadine Angerer for the Thorns. On paper the Thorns appear to have more depth but they have also been outscored 10-1 over a three-match losing skid that has seen their form dip from okay to poor to abysmal.

What to watch for: Both teams figure to struggle in back. The Spirit are down Ashlyn Harris plus two regulars with Toni Pressley out with a knee injury. The Thorns will start Michelle Betos in goal with Angerer in with Germany. Matheson and Allie Long will be missing in midfield. That could leave Christine Nairn as the most influential player on the park.