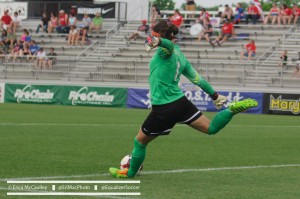 Erin McLeod and the Dash have now won three consecutive matches after beating the Flash for the 2nd time this season. (Copyright EriMac Photo for The Equalizer)

The Dash finally gave their home fans something to cheer about, beating the Flash 2-1 on Wednesday for their first ever points at BBVA Compass Stadium. Tiffany McCarty and Teresa Noyola scored to give them expansion side its third straight win overall while sending the Flash to their fifth loss out of seven.

In the 39th minute, Ella Masar’s high pressure created a turnover from Angela Salem. McCarty beat Kat Williamson to the loose ball and then got off a shot around Brittany Taylor for her 4th of the season and 3rd in the last two matches.

The Flash drew level in the 62nd minute following a lengthy stretch of possession that saw nearly every player get a touch. The final two were from McCall Zerboni and Adriana Martin, the latter finishing the former’s cross with a chip over Erin McLeod after Osinachi Ohale lost her footing trying to challenge the cross.

The Dash fought back immediately and nearly went back in front less than two minutes later when Lydia Williams robbed Kealia Ohai. Off the ensuing corner kick, Jasmyne Spencer bodied up Kaylyn Kyle in the penalty box and was whistled for a penalty. Having missed two previous chances from the spot at BBVA Compass, the Dash sent Teresa Noyola to take the kick and she beat Williams for her second game-winning goal of the season.

The Dash continued to pressure the Flash after going ahead 2-1 and Williams again made her presence known with a sprawling save on a Noyola free kick. The Flash eventually began creating chances, but the Dash were always up to the task, particularly Arianna Romero, who had a strong match at right back.

The Dash (4-7-1, 13 points) are right back at it Saturday night, hosting FC Kansas City. The Flash (4-6-2, 14 points) remain 5 points adrift of a playoff spot and begin a stretch of seven out of eight games at home next Wednesday against the Red Stars.