Dash break out in 3-0 win at Sky Blue 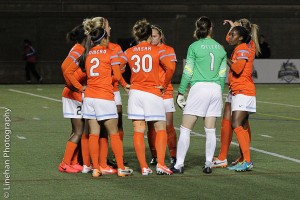 McCarty’s first goal gave the Dash a 1-0 lead for the first time and Erin McLeod’s clean sheet was also a Dash first.

“A lot of history for us tonight,” coach Randy Waldrum said.

The Dash jumped on Sky Blue often in a match that never looked like it would go any other way. McLeod did make one early mistake, coming out of her box for a ball that her defender, Osinachi Ohale, had easily beat her mark to, but Sky Blue were unable to take advantage of the blunder. On the ensuing counter, Kaylyn Kyle kept possession on an advantage call and fed McCarty on the left side. McCarty took on Caitlin Foord and beat her to the right before ripping a shot that left Jill Loyden with no chance.

The Dash made it 2-0 in the 20th minute off a deep throw in. Arianna Romero played give-and-go with Becky Edwards who lofted a perfect ball over top to Masar who had an easy header for her 3rd goal of the season. Sky Blue players argued vehemently that Masar was on an offside position, but the goal stood.

“That’s what Christie (Rampone) said,” coach Jim Gabarra said. “I’ll have to look at it on tape.”

Gabarra made two halftime changes, one of which sent CoCo Goodson to the bench for the first time in her NWSL career. Lindsi Cutshall replaced her at center back and Cami Levin dropped to left back with Kendall Johnson off. Janelle Filigno took Levin’s spot in midfield. The changes brought a bit of jump to Sky Blue, but they rarely came close to scoring. And they eventually conceded a third, McCarty’s second of the night.

Becky Edwards played another precise long ball for McCarty and Loyden came too far off her line and although she got a boot on it, she also went to the ground, leaving her goal open. McCarty sent the ball in and it deflected off Rampone’s head to make it 3-0. Since the ball would have gone in without the aid of Rampone, McCarty was credited with the goal, giving her three on the season.

The Dash (3-7-1, 10 pts.) debuted Whitney Engen, who played all 90 minutes at center back. Meghan Klingenberg was unavailable after her international transfer certificate failed to clear in time. Both players leave again Monday for national team camp meaning they will be unavailable for Wednesday’s home match against the Flash.

Sky Blue (2-6-4, 10 pts.) is at Chicago next Sunday and will play without Rampone and Kelley O’Hara, also heading to national team camp. The Dash lead Sky Blue for 7th place on the head-to-head tiebreaker.