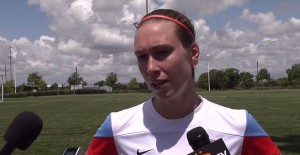 Whitney Engen is one of several players expected to debut across the NWSL this weekend.

The Breakers benched several of their most prominent players last week and beat up on the Thorns, 4-1. They returned them to the lineup four days later and lost to the Spirit. The situation has made for some uneasy times in Boston, where the home club has the fewest points in the league and an uncertain lineup situation. And they’ll need to be much better than last time they faced FC Kansas City, who are set to become the first team to cross over into the second half of their season.

What to watch for: Amy Rodriguez has been about the best striker in the league this season and she figures to cause trouble for a Breakers’ back line still looking to figure out its best style and personnel. Making matters more complicated is that the Blues can attack with just about equal ferocity down both sides of the field and their recent rest after a grueling May looks to have done them some good.

A year ago both of these teams were effectively eliminated from playoff contention by this point in the season. Today they sit first and third in the table after taking very different routes to respectability. The Reign acquired several quality players via trade and the international market. The Red Stars did more of their building through the draft. The Reign will be trying to eclipse the record they currently share with FC Kansas City, having played 10 straight without a loss, while the Red Stars are looking to jump back into the win column after dropping a tough one at home to the Spirit.

What to watch for: The Reign back line has been outstanding, but the Red Stars may provide a different sort of challenge. The speedy visitors will be trying to play balls over top and through to Jen Hoy, who has the pace to beat anyone the Reign will roll out on defense. Seattle may also have to deal with Christen Press, who figures to finally make her Red Stars’ debut at some point during this one. These are the two best defensive teams in NWSL so there shouldn’t be much space or many free balls through the midfield.

The third and final meeting between last year’s finalists has a much different feel than the first two. The Flash are suddenly in a tail spin, their 0-4-1 stretch representing the biggest loss of form they have had through the several leagues they have participated in. The Thorns are a bit better off but last time out played one of their worst games ever in a 4-1 loss to a Breakers side that benched many of its best players. Abby Wambach remains doubtful with the knee sprain she suffered against the Dash and the rest of the Flash attackers have been in neutral. Few thought this one would feature two teams looking up at the playoff positions. Western New York will be without coach Aaran Lines on the sidelines for the first time ever as he stayed home with wife and team president Alex Sahlen, who is expecting the couple’s first child.

What to watch for: The 2.0 version of the Thorns is just about ready to jump out of the bottle as Alex Morgan and Veronica Boquete are among those on the verge of making their 2014 debuts. That will change things up for a struggling side that will be looking to boss the midfield by keeping the ball on the ground and playing through to Morgan, Christine Sinclair, and Jess McDonald. The Flash have been much more direct and will likely look to generate offense off the counterattack. But they will need to find someone to pick up the scoring slack for Wambach. Stephanie Catley and Rachel Van Hollebeke are expected to debut in defense for Portland.

These are exciting times for the Dash. After scuffling through their first 10 games battling injury and inexperience the club is finally ready to welcome the centerpiece of their defense, Whitney Engen. The former WPS Defender of the Year is ready to make her Dash debut, as is Megan Klingenberg. Both were part of the Tyresö side that fell in the UEFA Champions League final, and both should add a good bit of professionalism to a side that has been slow out of the blocks. No such reinforcements await Sky Blue, who are in the final leg of a three-match home stretch that is off to an 0-2-0 start.

What to watch for: Putting Engen behind Becky Edwards and allowing Osinachi Ohale to play second fiddle in central defense will help shore up the spine of the Dash. Sky Blue’s best chance to overcome that will be through overlapping runs by right back Caitlin Foord (if she doesn’t play up top). Both teams have hurt themselves by making fatal mistakes at the wrong times so the team that plays the cleaner, more measured match figures to come out on top.

Not playing this weekend: Washington Spirit