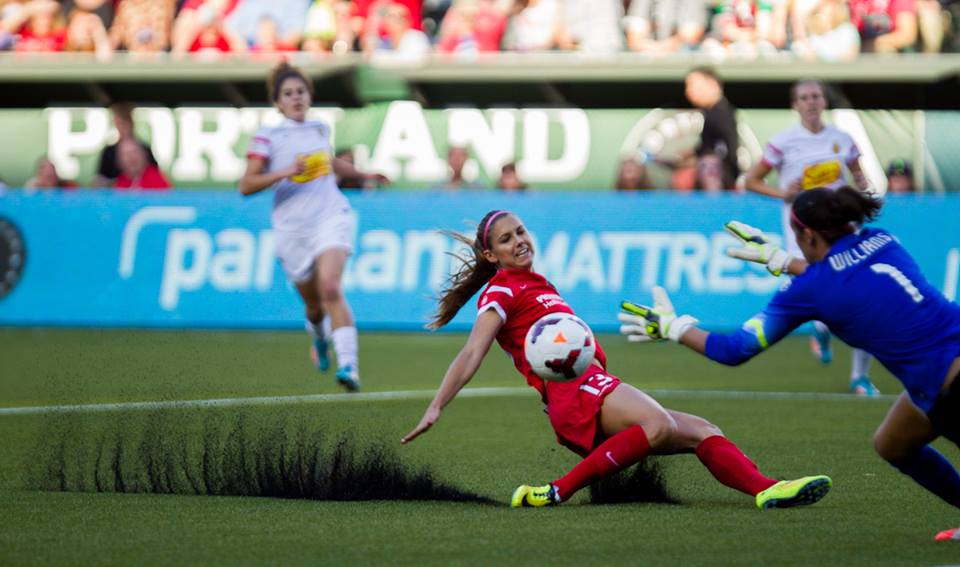 Ten days after Portland Thorns FC’s worst defeat in franchise history, they suffered the worst defeat in NWSL history to sour the debut of several star players, losing to the Western New York Flash 5-0 on Saturday at Providence Park.

It was the first five-goal margin in the league’s year-plus history and drops the defending champion Thorns, now tied on 14 pts. with the Flash, to sixth place in the league. The top four teams make the playoffs.

Portland lost 4-1 to a young, inexperience and last-place Boston Breakers team on May 28 in their last match. The Thorns have now conceded nine goals in their last two games and suffered a first-half red card in each match.

“It’s disappointing, obviously,” Thorns coach Paul Riley said. “We tanked in Boston. I thought there would be a great reaction tonight. We had an unbelievable week in practice. Just didn’t get it done.”

Saturday marked the return of Alex Morgan, who spent the last seven months on the sidelines due to a stress reaction in her left ankle. Morgan was active throughout the match, playing the full 90 minutes, but did not score despite several opportunities.

She started alongside Spanish midfielder Veronica Boquete and Australian defender Stephanie Catley, who made their Portland debuts. Defender Rachel Van Hollebeke came on at halftime for her first minutes of the season.

But the Flash, who entered the match on a franchise-worst five-game winless streak, would steal the show — and without injured star striker Abby Wambach or coach Aaran Lines, who stayed in Buffalo with his wife, Alex Sahlen, as she prepares to give birth to the couple’s first child.

Western New York’s onslaught began in the 11th minute when midfielder McCall Zerboni back-heeled the ball into the net after Carli Lloyd headed it toward goal. Zerboni was held onside by a Thorns defender standing next to the near post.

Everything unraveled for Portland beginning in the 26th minute, when an errant backpass from Nikki Marshall led to Thorns goalkeeper Nadine Angerer being called for a penalty kick. Angerer slid in on Kerr feet-first as the Australian dragged her right foot and earned the penalty. Only several seconds later, after Lloyd stepped up to position the ball for the kick, Angerer was issued a straight red card. Lloyd proceeded to finish the spot kick past backup Portland goalkeeper Michelle Betos to double the visitors’ lead.

“It was a poor ball from Nikki. She left it short,” Riley said. “Nadine didn’t touch her. You can see from the tape she didn’t touch her. The referee went to the linesman. I don’t know if the fourth official called it, somebody else called it because she wasn’t going to give it. I thought to be honest with you, there was enough coverage going to goal and the ball was going out. Samantha [Kerr] wasn’t catching it, so she went down. Losing Nadine at that point means you’re a player short on the backline and even before that we looked like we’d lost our way. Early in the game, we got rattled again.”

Four minutes later, Kerr scored to further shock the Thorns, getting her own rebound after heading the ball off the post to head it in for a 3-0 lead. And Kerr would score again in first-half stoppage time, finishing a give-and-go with Jasmyne Spencer.

Kerr nearly had a hat trick in the 67th minute, but put her shot off the post.

Lloyd scored five minutes into the second half for her second goal of the game and the Flash’s fifth.

Morgan had several chances on the night, the first of which came just 90 seconds into the match when she sliced a left-footed shot well wide from 18 yards out. Her 43rd minute header off a corner kick went over the bar.

Morgan had three 1-v-1 opportunities in the second half, but did not find net. Her best chance came in the 62nd minute, when she was played in behind in a 1-v-1 opportunity but her lob shot over Flash goalkeeper Lydia Williams went wide. Morgan got in behind again in the 76th minute, but Williams got her fingertips to a Morgan’s left-footed shot. Williams would deny Morgan again on a right-footed shot in the 87th minute.

Portland next faces the Washington Spirit in a home-and-home series over the next two weekends that could make or break the Thorns’ season.