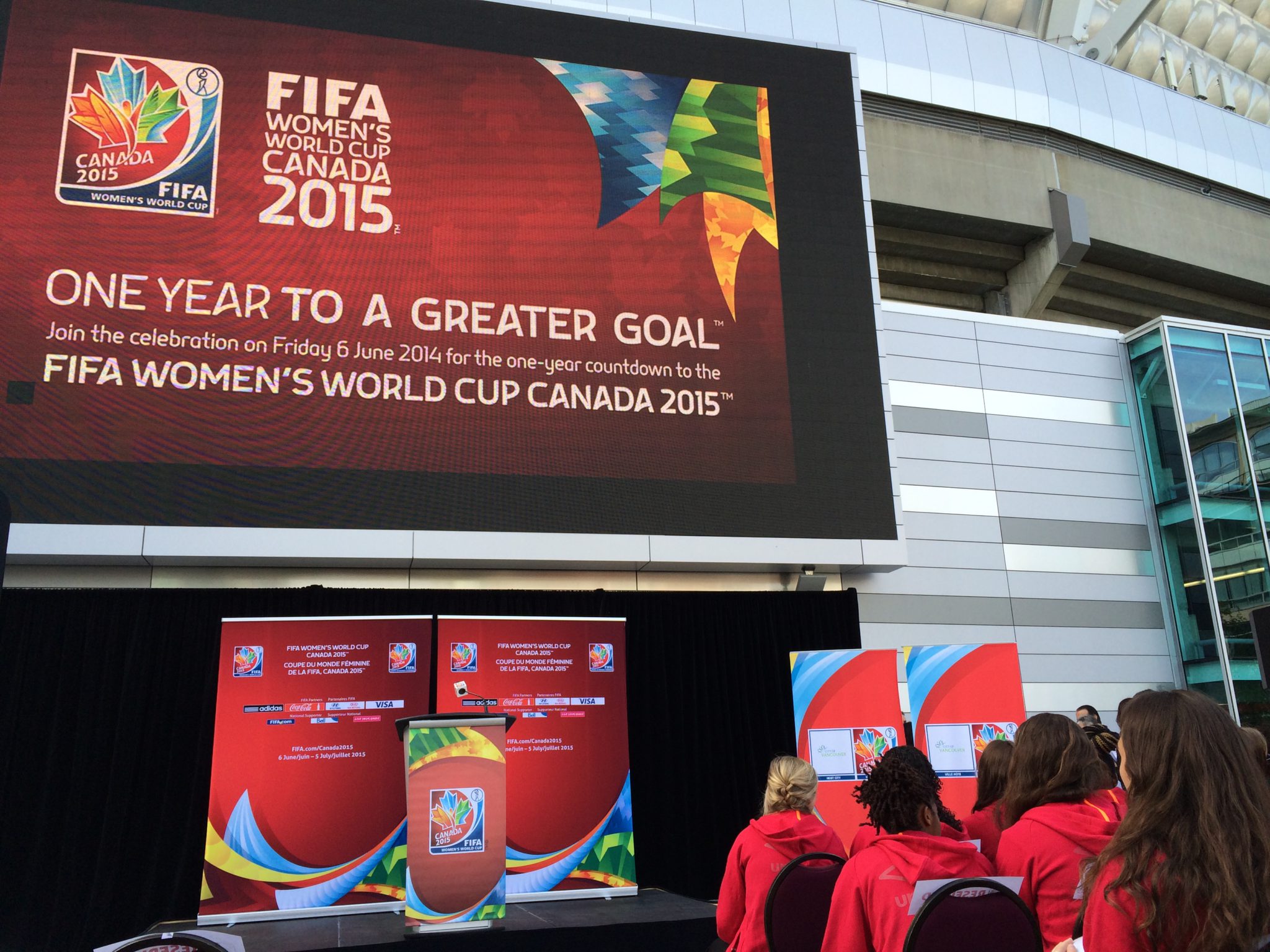 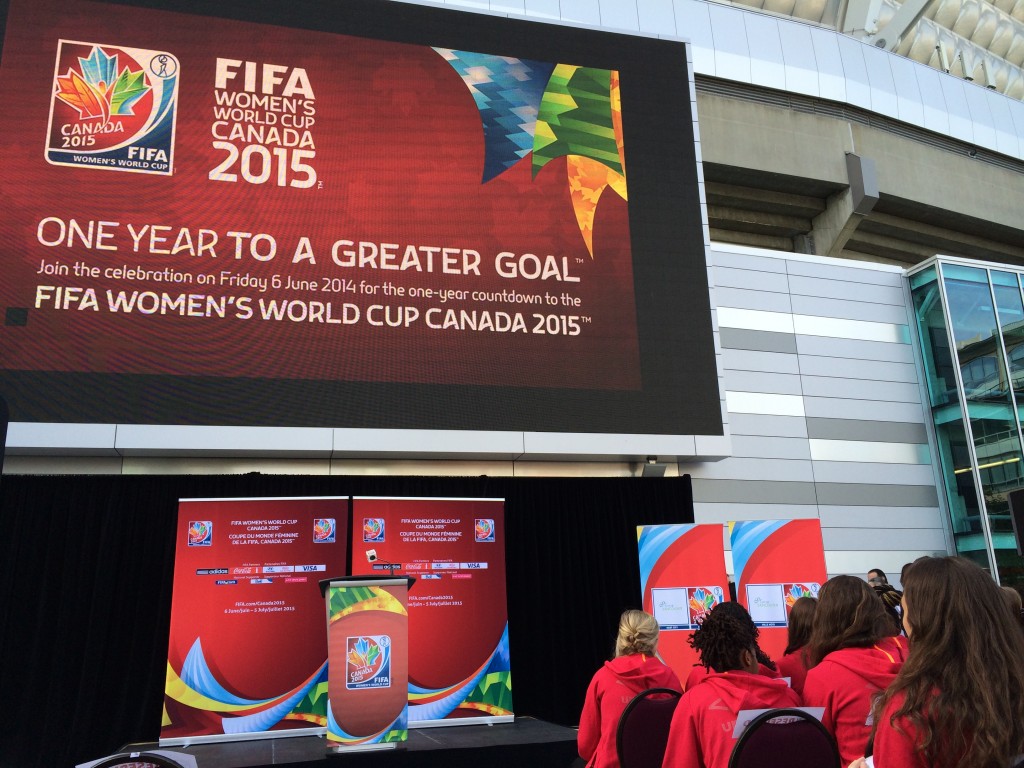 VANCOUVER, British Columbia – The 2015 FIFA Women’s World Cup is exactly one year away and on Friday events were held across Canada in five of the six cities that will host matches during the month-long event next year. Countdown clocks was unveiled in Vancouver, Edmonton, Winnipeg, Ottawa, and Montreal.

Before the 2015 FIFA Women’s World Cup begins next year the FIFA U-20 Women’s World Cup will take place in Canada starting on August 5. The entire Canadian U-20 team and coaching staff was in attendance at the Terry Fox Plaza outside of BC Place today, including rising star center back Kadeisha Buchanan.

The 18-year-old has come a long way in just a short amount of time. Growing up in the notorious Jane and Finch neighborhood of Toronto meant that Buchanan had to quickly grow a tough shell. With the support of her family she avoided the dangers of a gun crimes, drugs and other illegal activity.

“The area was what you’d call the projects, it was all welfare,” Buchanan said. “It was like a tough time. I’m always a good kid. I was never into that. I was very quiet, and stayed to myself. It really didn’t bother me.”

Playing soccer helped Buchanan stay away from neighborhood trouble, and it also helped her grow and mature as a person. It’s far too easy to fall into the wrong crowd, but Buchanan made a decision to play soccer instead.

“It keeps your mind off of different things. If you want to hang out with your friends, ‘no I have soccer.’ That kept me kind of in place. Soccer made you more mature, it takes you away from a lot of things. I always knew I wanted to play soccer.” 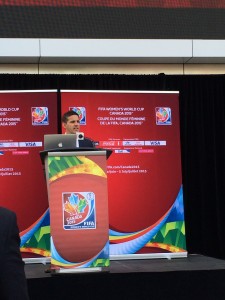 Coach John Herdman has called Buchanan the Christine Sinclair of center backs. He always speaks highly of Buchanan, and just as he was after she scored against the U.S. on May 8 in Winnipeg, he was grinning from ear to ear in Vancouver Friday morning as he spoke about her.

“I smile every time I talk about Kadeisha because she’s just a kid that absolutely just loves it. No challenge is too big and nothing’s too stressful. She just loves her sport. She has a tough background and she appreciates everything she gets and I can’t wait to see her playing against (Germany’s Celia) Sasic and (Dzsenifer) Marozsan.”

Herdman first discovered Buchanan’s ability as a footballer during a November 2011 training camp in Florida with the U-17 team. Since then she has played outstanding and in recent form she has locked down Abby Wambach in a trio of matches against the United States. Buchanan has been known for questionable tackles, and was almost sent off during the 1-1 draw in Winnipeg last month.

The Newcastle maestro started Buchanan and she played 70 minutes in a 1-0 loss to Silvia Neid’s squad on June 19, 2013, in Germany. Playing against the European Champions at BC Place on June 18 will offer a brand new type of test for the always evolving Buchanan. Herdman is confident in his belief that she is up for the task.

“It’s a new test, she played them in Paderborn last year and again she was able to restrict them to one goal,” Herdman said. “The movement of these players, they’re technically the best in the world and there is no doubt about that. Team efficiency and tactics, the way Marozsan and Sasic combine with Keßler, it’s great to watch. For Kadeisha it’s a different style now. I don’t think you can be as gung-ho as you were in the U.S. game. She has to be more controlled, and patient and know what she can go after. These are the learnings that we’re desperate to see her go through and I’m absolutely sure she will come out of it okay.”

Buchanan has been in Vancouver training with her U-20 teammates in Vancouver this week as Canada will play the first of two closed-door friendlies against Korea Republic on Saturday, then again on Tuesday. U-20 coach Andrew Olivieri is shaping up his roster as that first match against Ghana at BMO Field in Toronto quickly approaches. Buchanan is not the only player that the former Montreal Impact player believes could play in both World Cups. Rebecca Quinn, Sura Yekka, Jessie Fleming, Ashley Lawrence, and Nichelle Prince all have the potential to compete for Canada at both World Cups.

“Some of them like a Kadeisha Buchanan and a Sura Yekka they’ve played some big matches for our women’s team already and I think they are key members of the squad,” Olivieri said. “I think there are five girls who have been playing regularly with our senior team and I’d love to say that after 2014 there might be a sixth and a seventh.”

In order for those players to shine and represent Canada next summer they will first have to get through Group A matches against Ghana, Finland and North Korea at this summer’s U-20 tournament. By no means does the host country have an easy path to the final match at Olympic Stadium in Montreal on August 24. Not much is known about Canada’s three opponents. Olivieri has been watching film as he looks to get a sense of what Canada will be up against at the 2014 FIFA U-20 tournament.

“I can’t say much about them (Ghana) because they’re a very tough team to get a hold of footage of. They qualified out of Africa and we won’t know much before we go in. It’s a bit of a challenge and that’s our first game. Finland we’ve had an opportunity to see quite a bit. They’re a really resilient team, a disciplined team and they’ll make it tough on us. North Korea are one of the best programs in youth soccer. They always seem to be around that World Cup final at the youth level and that’s an absolute challenge. We’re hoping to have access to the quarterfinals wrapped up before we have to play North Korea.”

Six of the seven venues being used between the U-20 World Cup and senior World Cup are artificial turf. Only BMO Field in Toronto will feature grass and that’s only for the U-20 tournament this year (Toronto won’t host games in 2015 due to the Pan American games).

When this reporter talked to Peter Montopoli, the National Organising Committee Chief Executive Officer, on November 24, 2013 prior to the Canada and Mexico 0-0 stalemate, Montopoli talked about the process and timing in which all six pitch venues would be FIFA approved and tested for the 2015 FIFA Women’s World Cup.

“There is a 12-month window to pass, so anytime 12 months prior to the competition going on June 6, 2015. At this point and time we don’t have the time to change the turf, but we will be reviewing it each and every year.”

On Friday, Victor Montagliani, the Canadian Soccer Association President and National Organization Committee Chairman talked about the turf and the testing process it will undergo before the first match on June 6, 2015.

“There is a process for that and they won’t be tested until probably, I’m not sure exactly….but either this winter or next spring. It’s too early to test it right now.”

An April 16, 2014 report by Bruce Constantineau in the Vancouver Sun stated that the Polytan surface used at BC Place will very likely be replaced before the 2015 FIFA Women’s World Cup. The leading turf replacement candidate is a friendlier rugby type of artificial turf.

When asked about replacing BC Place with a rugby type of artificial turf Montagliani said wasn’t aware of any details.

The turf will continue to be a growing topic of discussion until both tournaments have concluded. Players like Buchanan and Wambach will have to adapt and make due with the pitch they’re left with regardless of its state. The greater goal for Canada is to host a successful FIFA U-20 Women’s World Cup and an outstanding FIFA Women’s World Cup the following year.

The draw for the 2015 FIFA Women’s World Cup will take place in Ottawa, Ontario, on Saturday, Dec. 6 at the Museum of History. Twenty four nations will be drawn into the tournament hoping to avoid the group of death.

Tickets for the 2015 FIFA Women’s World Cup will go on sale to the public on Wednesday, Sept. 10.

The “One Year to a Greater Goal Countdown” event in Moncton, New Brunswick, was cancelled Friday because of the recent tragic events the claimed the lives of three Royal Canadian Mountain Police officers earlier this week.