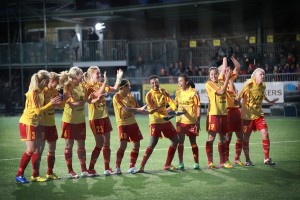 As unfortunate financial realities of women’s soccer go, Tyresö may just have jumped to the top of the list of stories.

The unraveling of the club has been well-documented for several months, but on Thursday it all came to a head when the Swedish club – two weeks removed from a runners-up finish in the UEFA Women’s Champions League – announced it would not play out the rest of the Damallsvenskan season. Effective immediately, all players are released as free agents.

For U.S. soccer fans, who have endured the folding of two leagues and several teams, the news sounds all too familiar. Saint Louis Athletica pulled out of WPS in the middle of the 2010 season after the club’s previously mysterious investors suddenly dried up.

The news regarding Tyresö is particularly unfortunate given the wealth of talent on the team (and, surely, that factored into money drying up) as one of the best teams in Europe and in the world. One less defensive lapse in Lisbon and Tyresö would have been folding up shop two weeks after becoming reigning European champions. Instead, VfL Wolfsburg repeated as champions.

Sure, it will be pointed out that Marta – who took a significant pay cut at Tyresö compared to her WPS days – is yet again part of a team folding (LA Sol in 2009, FC Gold Pride in 2010), but she wasn’t the only one getting paid well. Marta made about $300,000 USD at Tyresö (she made $500,000 per season in WPS); Veronica Boquete was paid only a few thousand dollars less.

The players, however, haven’t been paid since March due to the financial troubles. And so they’ll disperse to other teams, ending a short chapter of history of an all-world team.

Another sad moment for women's soccer…officially losing one of the best teams in the game. Hoping all my teammates find new happy homes!