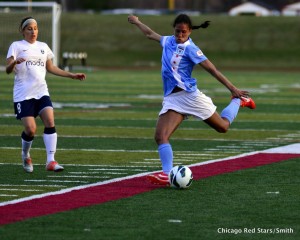 Chicago Red Stars and U.S. national team midfielder Shannon Boxx is training with Portland Thorns FC as she attempts to regain fitness after giving birth to her first child in February.

Boxx, who turns 37 this month, was called into U.S. training camp for the mid-June France matches, but she’s only joining the U.S. to be evaluated and practice. She is yet to play for Chicago this season, but she lives in Portland.

“Any help we can give Shannon,” Riley told the Oregonian. “She’s been training on her own. She needed an opportunity where she could come train with a team.”

U.S. players are pretty frequently given the opportunity to get back in with the team following pregnancy. Most recently, forward Amy Rodriguez has done so in better-than-ever form at the league level, scoring eight goals for FC Kansas City in 10 games, good for second in the league.

Shannon Boxx training with the Thorns was a collaboration between the teams. Nothing more than one team helping another. #NWSL

Also on the Red Stars front: New Zealand center back Abby Erceg has finally been cleared to play with the necessary paperwork, so she could debut on Wednesday against Washington.

The Lowdown: Week 8 was one to remember
Spirit sign Singer to bolster back line