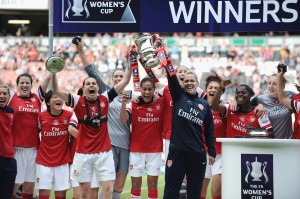 Kelly Smith scored the game-winning goal to lift Arsenal Ladies to their 13th FA Cup crown with a 2-0 victory over Everton on Sunday. Smith played provider on the second goal in Arsenal manager Shelley Kerr’s final match in charge.

Smith opened the scoring in the 15th minute on a wonderful free kick. The 35-year-old Smith then turned provider in the 62nd minute when she served up a ball for Japanese international Yukari Kinga to finish.

“Kelly’s just incredible,” Kerr told the Guardian. “I don’t think you guys in England will ever see another player like her; she’s fantastic. Every time she takes a free-kick I’m almost writing down in my notepad, ‘It’s a goal.’ She’s been outstanding for me. She’s not the most vocal person but she leads by example on and off the pitch. There were other brilliant individual performances as well but it was also a great team performance and we thoroughly deserved the win.”

Arsenal are shockingly bottom of the table with only 1 point from four games. Smith had said pregame that winning the FA Cup could be a turning point for Arsenal.

“The FA Cup could be a turning point for us. It’s the most prestigious cup competition in women’s football so a win on Sunday could change our season,” she told Arsenal.com.

Whether or not Arsenal turn around their league form remains to be seen, but for now, they’ll enjoy a 13th FA Cup triumph.