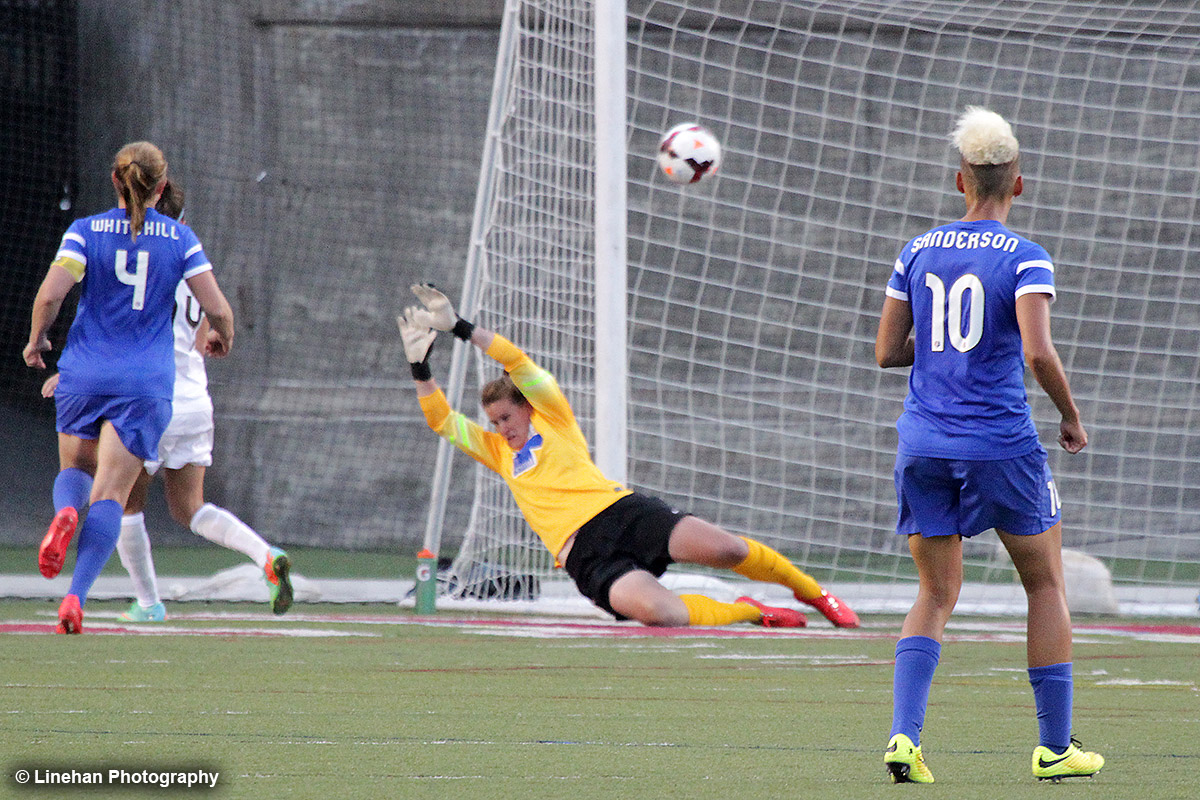 Jodie Taylor scores her first of two goals to lift the Washington Spirit past the Boston Breakers, 3-2. (Photo Copyright Clark Linehan for The Equalizer)

Tom Durkin turned back to his regular starters and Lianne Sanderson scored a first-half brace, but it wasn’t enough for the Boston Breakers as they fell at home on Sunday at Harvard Stadium, 3-2 to the Washington Spirit. Jodie Taylor scored a brace of her own in the second half to lift the Spirit to the win.

Washington surges into third place in the National Women’s Soccer League with the victory, which is the Spirit’s third in their last four games. They are unbeaten in four straight, scoring three goals in each match of the streak.

Sanderson opened the scoring for the Breakers in the 29th minute on a close-range effort after precise dribbling from midfielder Kristie Mewis opened up space. Both players were among the seven regular starters who were benched for Wednesday’s shocking 4-1 win over Portland Thorns FC. Mewis also delivered a long ball over the top in the 16th minute that sprung Heather O’Reilly — also benched Wednesday — into a 1-v-1 against Spirit goalkeeper Ashlyn Harris, but Harris made a kick-save to keep the game scoreless early.

Lianne Sanderson scored twice, but it wasn't enough as Boston fell to Washington, 3-2. (Photo Copyright Clark Linehan for The Equalizer)

Boston, however, would hold the lead for only four minutes after Sanderson’s opener. Captain Cat Whitehill was called for a handball at the top of the Breakers’ box and Christine Nairn stepped up to finish the free kick, putting it right through Boston’s wall.

Just as the Spirit have done all season, though, they conceded right after scoring. Sanderson scored her second goal of the night in the 37th minute, calmly finishing a feed from Australian Lisa De Vanna, who was back in the lineup for the first time since May 3 after Asian Cup duty and suspension.

Taylor took over for the Spirit in the second half, scoring twice to lead her team to victory on the road. She struck three minutes after halftime, tapping in a cross from midfielder Diana Matheson. Nairn hustled to win the ball back from the Breakers on the left flank and, once she did, played Matheson down the line with a cheeky backheel. Matheson’s left-footed cross found Taylor, who touched it over Boston goalkeeper Alyssa Naeher.

A defensive lapse by the Breakers led to Taylor’s game-winner in the 74th minute, just one minute after Whitehill had a goal disallowed for being offside. Whitehill and Joanna Lohman didn’t communicate as a ball trickled between them as the last defenders, and Taylor ran right between the two Breakers to pounce on the ball and go in on a breakaway. Taylor chipped Naeher for the far-post finish, and this time the Spirit held on without conceding again despite a flurry of late chances for Sanderson and Lohman.

The victory is a positive start to a four-game road stretch for the Spirit that includes visits to second-place Chicago and Portland over the next two weeks. Boston hits the road to face FC Kansas City on Saturday, but gets another shot at the Spirit in Harvard Stadium on June 11.