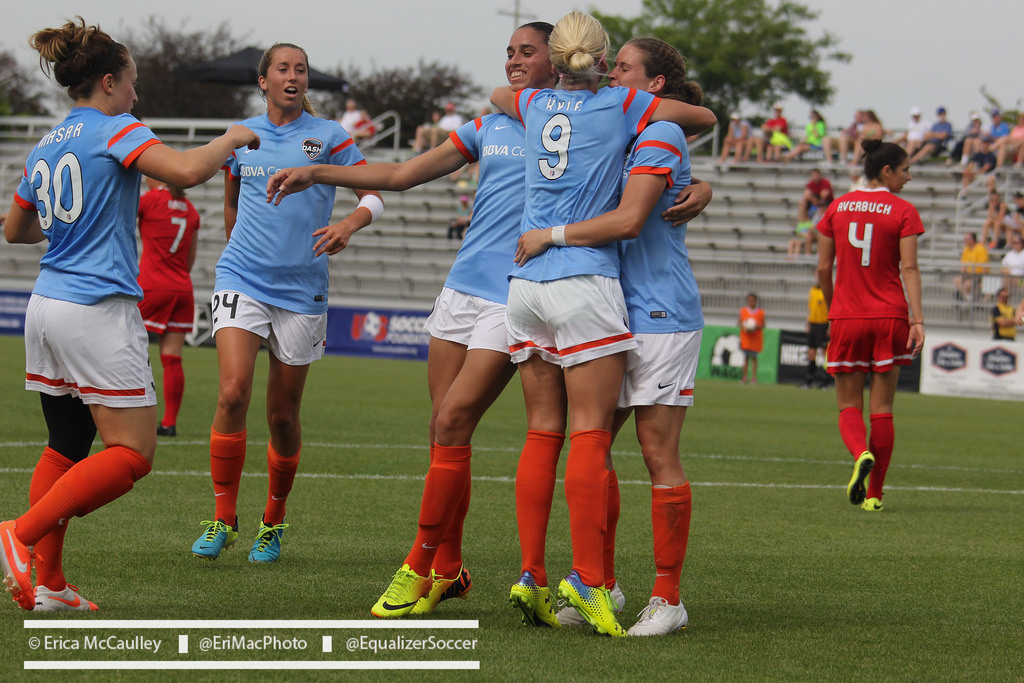 ROCHESTER, N.Y. — It was the first-ever match up for the Houston Dash and Western New York Flash on Saturday night at Sahlen’s Stadium and the Dash reigned supreme, defeating the Flash 2-1. Western New York is now winless in four straight games, losing three of them.

Abby Wambach exited the game in the 25th minute after a collision earlier in the 17th minute. Flash staff reported that she has a knee injury, but it doesn’t appear to be anything serious.

“I think probably most importantly, we’ve been playing well and I think our record just hasn’t shown how competitive we’ve been in every game, so it’s really nice to come on the road – against a very good team, by the way – and get the result tonight,” Houston coach Randy Waldrum said. 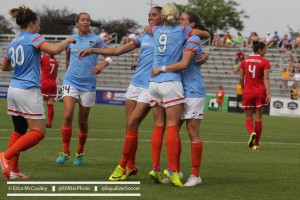 The Houston Dash earned a big win on Saturday, topping the WNY Flash 2-1 in Rochester, N.Y. (Photo Copyright Erica McCaulley for The Equalizer)

It was a slow start for each team as both struggled to gain momentum offensively. Before Wambach’s exit and a shift in the front line, Sam Kerr had some good runs along the left flank, but Dash defender Osinachi Ohale was never far behind and was consistently there to break down play.

There was a close call in the 4th minute when Adriana took a free kick for the Flash from 25 yards out. Her shot sailed in toward the lower right post, but Houston goalkeeper Bianca Henninger — starting for an injured Erin McLeod — was there to make the diving save. Nina Burger retaliated a minute when she took advantage of a giveaway by Flash defender Kristen Edmonds and drilled a shot that sailed just wide of the left post.

In the 44th minute Adriana crossed in a beautiful ball into the middle of the box, where McCall Zerboni was waiting and drilled a shot into the back of the net on the volley.

Ohai found the equalizer in the 51st minute when Lydia Williams misread her shot and the ball sailed right passed her at the far post.

And it was Burger who ultimately had the last laugh. In the 73rd minute Ochs took a corner kick and Burger was there to head in the goal, putting the Dash on top. The goal was the Austrian forward’s second of the season.

“I think towards the second half we got a little bit complacent and hats off to them, they capitalized off of a set piece to be able to go up,” said Flash defender Brittany Taylor. “I think all of us need to dig a little bit deep and everybody, including myself, can put in a little bit more fight and mentality.”

Zerboni also added, “We have the character here. We have the will. We’re going to have to find a way to get better performances on the field.”

With the win, Houston (2-7-1, 7 pts.) climbs back out of last place, which they had dropped to after Boston’s big win over Portland in mid-week.

NWSL Week 8 preview: Do the Breakers have more to give?
Kelly Smith lifts Arsenal to 13th FA Cup crown