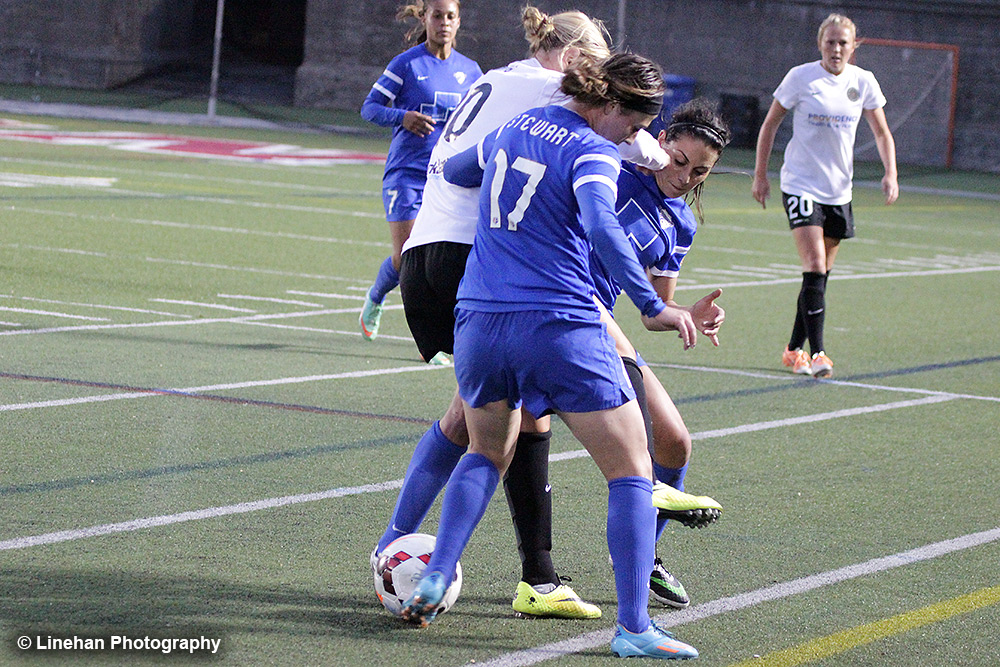 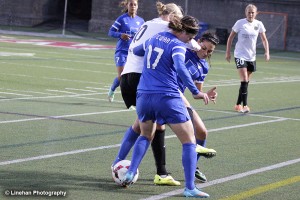 Chelsea Stewart and Bianca D'Agostino were among several players who were in bigger roles than usual for Boston on Wednesday. (Photo Copyright Clark Linehan for The Equalizer)

ALLSTON, Mass. — Jazmine Reeves can’t remember the last time she scored a hat trick, if ever, but all that matters for the Boston Breakers is the one she tallied on Wednesday.

Reeves’ three goals led the most surprising result to date in the unpredictable NWSL season: a 4-1 Boston win – a Breakers team that entered the match losers of four straight and in last place – to defending champion Portland Thorns FC.

As shocking as the result was the lineup that achieved it. Breakers coach Tom Durkin sat seven starters and went with a pair of rookies up top. Those two rookies – Nkem Ezurike and Reeves – accounted for all four goals, with Reeves playing provider on the only one she didn’t score.

The lineup changes were made to insert some fresh legs and give new players chances, Durkin said, but there was also a message sent to a team on a four-game skid and showing few signs of hope.

“I think it says two things,” Durkin said. “It says that the squad is deeper than everyone thought, No. 1. Two, there is competition for positions for Sunday’s lineup. The nice thing going into Sunday is a lot of our more senior players should be well-rested for Sunday’s game. All that being said, hopefully their minds are in the right place to put in the type of effort that these girls put in tonight.”

Wednesday is the kind of result that could kick-start the Breakers, who with the win pulled out of the basement and two points in front of expansion side Houston Dash.

“We bought into the system, we bought into the gameplan,” Boston captain Cat Whitehill said. “Everybody did their roles well, everybody played to their strengths, and this kind of game is what happens when people do that. And I think that it just shows you, if you listen to (Tom), things actually work.”

Heather O’Reilly, Lianne Sanderson and Nikki Washington came off the bench in the second half, but Kristie Mewis, Katie Schoepfer and Mollie Pathman never made it into the game and Joanna Lohman didn’t make the gameday roster. Sunday will bring some tough decisions for Durkin, who will have the options of both hot-handed but unproven players, as well as rested and likely very motivated veterans.

But there won’t be any advantage of a surprise factor on Sunday. Thorns coach Paul Riley admitted postgame Wednesday that the amount of wholesale changes Durkin made caught his Thorns staff by surprise, and the Englishman tipped his hat to his opposing coach. But surprises don’t repeat. A revived but still inconsistent Washington Spirit side heads to Harvard Stadium on Sunday having seen what Boston did to Portland, knowing they’ll need to prepare for several scenarios.

That’s Sunday, though. There’s a sense that the Breakers will enjoy Wednesday’s win a little longer than usual for a midweek regular season match.

“Tonight feels a lot better than it has in the last few games,” Whitehill said. “We’ve been frustrated. It’s a big load off of a lot of people’s backs – it’s been tough to sleep just dreaming of winning.”