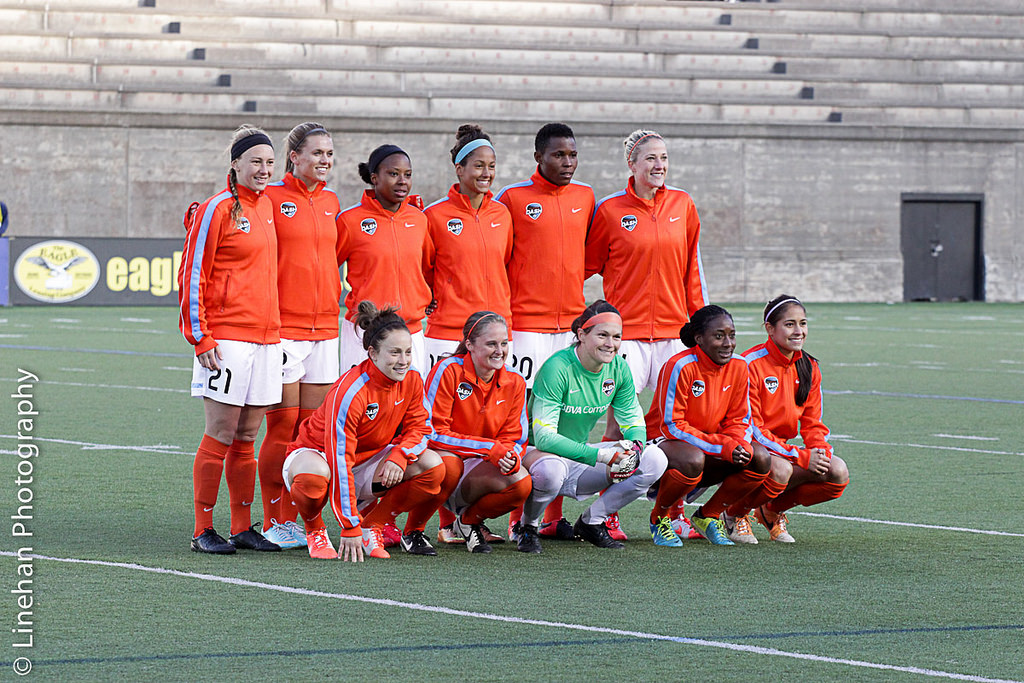 The Houston Dash only have only 4 points from nine games, but they are keeping things positive. (Photo Copyright Clark Linehan for The Equalizer)

Nine games into their existence the Houston Dash have found myriad of ways to frustrate themselves and their fan base. From conceding early to conceding late, to misfiring from the penalty spot, it has been rough sledding for the Dash in the early going. But the first NWSL expansion club remains committed to staying the course towards becoming a winning franchise on and off the field.

“The one thing I am extremely proud of is the players and the effort they have put in,” Randy Waldrum, who left Notre Dame to become the first head coach of the Dash, said. “I think with the exception of when Osinachi (Ohale) got ejected in the first Kansas City game and we ended up losing 4-0, we’ve been in every game. You can go down the roster and look at everybody else’s roster and look at ours and say that’s pretty impressive that (we’ve) been in every game.”

The Dash are not necessarily complaining about whatever disadvantages their expansion status comes with, but they certainly are not shy about letting us know they’re not.

“We have to keep reminding ourselves: It’s now like we’re an expansion team that came in September at the end of last year,” Waldrum said. “We’re an expansion team that came in really in January. Putting things together as quickly as we did based on what we had player pool wise and not getting the allocations everyone else had, I still think we can take some pride at least in how we’re playing even if the results don’t speak to it.” 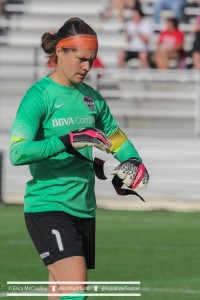 The Dash have had numerous injury issues in their first season. Goalkeeper Erin McLeod has been dealing with an ongoing right glute issue. (Photo Copyright Erica McCaulley for The Equalizer)

The real issue for the Dash though has been the absence of several players who they thought would be in the mix, but are not. Lauren Sesselmann tore her ACL before the season and Aya Sameshima also took a pre-season knee injury. Sesselmann is out for the season and Waldrum said last week he is preparing to go the rest of the way without Sameshima, who is rehabbing in Japan. That pair was supposed to tie the back line together before Whitney Engen and Meghan Klingenberg arrive next week.

“We tried to prepare our team around that by having Sameshima and Sesselmann,” Dash president Chris Canetti said. And even though Engen and Klingenberg are close to wearing Dash kits – joining the team on June 2 – they are likely to be called in with the U.S. for friendlies against France soon thereafter. “You just deal with it. It’s not worth getting upset over.”

The Dash also lost Brittany Bock to a torn ACL less than 25 minutes into the season, have had both goalkeepers on the injury report of late, and did not have Jordan Jackson for Monday’s loss in Washington after she was concussed blocking a corner kick against the Red Stars last week. First Round pick Kealia Ohai is healthy now but also took a knock on opening night and was slow to get going after that.

Waldrum, who admitted the losing has been tough to adjust to after a wildly successful college career, says even without the injuries he knew it would take time to pull the squad together. “We knew it was going to take a little bit of time, but the one thing is the players have bought in to what we’re trying to do.”

The pleasant surprise in the team has been Becky Edwards. It’s not that anyone doubted Edwards’ ability. The surprise has been how well she has played and how durable she has been less than a year after her own ACL surgery.

“She has far exceeded,” Waldrum began without completing the sentence. “Honestly I didn’t even plan on her this much so early, it’s just we had to. She’s a true pro. She knows how to take care of her body on her days off. To be playing seven or eight months out like she did and to be ready for the season is pretty miraculous. She’s a great example to young players.”

Edwards is also an early favorite of the Dash fans, which despite not being quite as plentiful as Canetti would like, still outnumber most teams in NWSL that were around at least since last season. Through four home matches, the lowest attendance in Houston was 3,931 for their midweek match against the Thorns. Canetti reiterated managing director Brian Ching’s comment on halftime of that night’s webcast that the club was disappointed with the attendance. Yet two teams — Sky Blue FC and the Breakers — have never had an NWSL attendance as high as 3,931. (The Reign first topped that number last weekend and the Red Stars only time topping it was their doubleheader with the Chicago Fire.)

“We are disappointed in our attendance,” Canetti said. “We know we can do better. It’s just a management challenge. I recognize we’re doing better than seven of the other teams, but I feel like we can be doing numbers that are closer to Portland. But there is some real potential here. It’s going to take a little bit of a building process, but we can certainly grow our attendance and grow our passions for the club over a steady basis.” 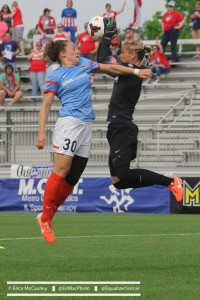 Canetti said the Dash have about 2,500 full season ticket holders and that they will take advantage of some down time for the Dynamo during the World Cup break to push packages that will cover the remaining eight home games. “That’s not quite where I wanted to be. I had an expectation to be higher on season tickets. I expect that probably that was a result of us jumping in so fast and not having a ton of time.”

On the possibility of teams like the Dash and Thorns pulling too far ahead and leaving some of the other teams behind, Canetti added: “We need all the teams to be successful. I’m hoping that everybody can find the best way for them to capitalize on their markets.”

There is also a near constant theme of having more MLS clubs adding a women’s team to help stabilize the NWSL and its brand. Canetti echoed much of what’s already been said, but did confirm he has fielded inquiries from other MLS bosses.

“The way I see it is not many MLS clubs, including ours, paid much attention to what went on in NWSL last year, nor did we pay attention to what was going on in Portland because Portland is such a unique and special soccer town,” Canetti said. “But I sense now that we’ve done this, and while we’re certainly not Portland, other MLS teams are looking at us and saying ‘what’s going on down there?’ I’m getting calls and having conversations with other team presidents and with owners who are very inquisitive about what’s been going on with the Dash.

“I can say that we’re really happy that we made the move and it’s been really good so far.”

It took the Dash four home games to score a goal, and they missed two penalties before Ella Masar finally converted last Friday against the Red Stars. The goal tied the match and was a magic moment early in the Dash’s history. Masar took her shirt off though, drawing a yellow card, her 4th of the season. She’ll have to go the rest of the season without going in the book or she will be sat down for card accumulation. Waldrum said he could not fault Masar for the excessive celebration yellow—especially since he was later sent off—but maybe for some of her other yellow cards that were the result of letting her aggressive style get the better of her.

Monday was another tough day. The Dash tied the Spirit twice and Erin McLeod saved a late Diana Matheson penalty. But she could not stop Christine Nairn’s titanic game-winner that was equal parts golazo and having too much space in midfield.

Here are a few soccer-related takeaways from Week 7:

— Through six weeks only one match—the Reign’s win over the Thorns—was decided by a goal in the 90th minute or stoppage time. Week 7 had three of them, two that moved up the Spirit, who would have had a single point if their matches had ended on time but wound up with a draw and a win for four of a possible six points. Not to be outdone, the Reign were facing their first loss of the season when Kim Little equalized in the 92nd minute against the Flash.

— Sky Blue scored a huge win Saturday night in Portland three days after defensive lapses and a questionable penalty call limited them to a draw in Washington. After being under siege much of the second half they turned what looked like a harmless free kick into a 1-0 win when Christie Rampone found Kelley O’Hara for the goal. O’Hara has suddenly scored in consecutive matches for a club that can use all the help it can muster around the opponent’s goal.

— The Flash missed Samantha Kerr much more than most of us thought. They were much better in Seattle, but their midfield looked totally disjointed in Washington and Portland—games that sent them to consecutive losses for the first time in the NWSL. Between losses, Abby Wambach challenged—or took pot shots depending on your perspective—her teammates to step up their games in support of her and Carli Lloyd.

— Waldrum’s ejection was the first for a head coach in NWSL. He watched Monday’s match from the stands at the Maryland SoccerPlex. Assistant coach Lee Cullip ran things from the bench.

— Jen Buczkowski played two more full 90s to bring her streak to 33 straight matches and 2,970 minutes since the league was formed. Amazingly she played every minute during a nine-match stretch that saw the Blues play weekend-midweek from April 26 to May 25. They finally get a break this week before hosting the Flash on June 4. Not to be outdone is Sky Blue’s CoCo Goodson whose perfect attendance mark remains intact at 31 matches and 2,790 minutes.

— Jordan Jackson did not travel to Washington with the Dash after being concussed during their loss to the Red Stars last week.

— Diana Matheson’s missed penalty against the Dash leaves the Thorns as the only NWSL team not to miss a penalty.

— It seems Hope Solo just can’t get along with opposing supporter’s groups. Two weeks after clashing with the Riveters in Portland, Solo was reportedly involved in a war of words with the Blue Crew in Kansas City last Wednesday. And let’s not forget her run-in with the Riptide at Harvard Stadium while playing for the Atlanta Beat in WPS.

-Another Friend of the Lowdown has stepped aside.  Ryan Wood has been with the Breakers since the WPS era and was always reliable and expedient in his assistance on all matters surrounding the club.  Thanks Ryan.