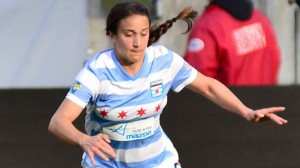 Both teams come to this match riding high. The Red Stars have won four straight and are unbeaten in five starting with a 1-1 draw on their last trip to Yurcak. Sky Blue won in Portland with a late goal on Saturday night that put them back in touch with the middle of the pack. This should look very different from the first meeting when the national team players were in camp leaving both coaches to resort to makeshift lineups. The Red Stars won’t have Jackie Santacaterina, out with a concussion, but Taryn Hemmings is probable for the first time and could make her 2014 debut. Melissa Tancredi will serve her red card suspension.

What to watch for: Jen Hoy has scored a goal in each of the Red Stars’ four straight victories. She can finish in a variety of ways and has speed to boot. Enter Christie Rampone, still battling her foot injury but looking better and better as the season progresses. Rampone is adept at shutting down speedy forwards. Kelley O’Hara found her scoring touch on the recent road trip and may have found a permanent home at forward, especially with Caitlin Foord back from the Asian Cup.

The Breakers took two of three from the eventual champions in 2013, something they’ll want to draw on as they try to rescue a season that is spiraling out of control early. Not only are they 1-6-0, but five of their seven goals have come over two matches. Lisa De Vanna is back with the team but suspended for this one thanks to a red card in her most recent league match. The Thorns are trying to shake off the cobwebs after losing a tough, home match to Sky Blue over the weekend. Alex Morgan has been upgraded to questionable and could make her season debut.

What to watch for: Only two Thorns players—Jess McDonald and Allie Long—have scored this season, and the most noted exception is Christine Sinclair who finally showed some signs of frustration against Sky Blue. The Breakers are soft in back and tend to make more than a few mistakes over 90 minutes so there figures to be ample opportunity for Sinclair to break her duck.