US, France U-20s to play twice in June WC warmups 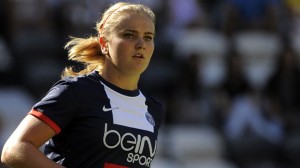 Lindsey Horan won't have to travel far to join her U.S. U-20 teammates for their next matches. (Photo: psg.fr)

Just like the senior teams, the United States and France U-20 women’s national teams will play twice in June as they prepare for a World Cup.

The U.S. U-20 women will travel to France for matches on June 10 and June 13, in Plabennec and Plougastel, respectively, as each team prepares for the 2014 FIFA U-20 Women’s World Cup in Canada. Paris Saint-Germain striker Lindsay Horan is among the only professional player of the 20 on U.S. coach Michelle French’s roster. Horan has 20 goals in 21 U.S. U-20 international matches.

The United States team is in a stacked Group B at this summer’s U-20 World Cup with Germany, Brazil and China PR, while France is in Group D with Paraguay, New Zealand and Costa Rica.

“The chance to play against one of the top U-20 teams in the world prior to the World Cup is an incredible opportunity,” French said. “The experience and knowledge we’ll gain from these two games against France will push us to sharpen our focus and drive even more as we continue to grow as a team in these final stages of preparation for the World Cup.”

World No. 4 France’s senior side travels to the States to take on the U.S. on June 14 and June 19 in Tampa, Fla., and East Hartford, Conn., respectively.