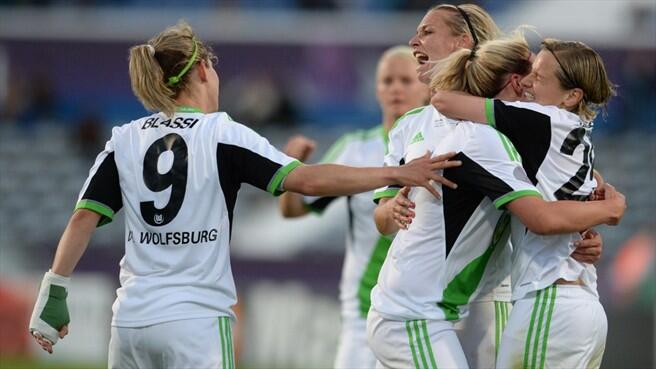 VfL Wolfsburg twice came from behind on Tyresö FF in the UEFA Women’s Champions League final on Thursday in Lisbon to win 4-3 and clinch a second straight title.

Martina Müller’s 80th minute goal — her second of the game — proved to be the game-winner after Wolfsburg came back from 2-0 down at halftime ad 3-2 down after a flurry of second half goals.

With the win, Wolfsburg hope to join Umeå IK (2003, 2004 champions) and Lyon (2011, 2012) as the only teams to win back-to-back European crowns. Wolfsburg beat Lyon last year in the final to deny the French team a historic three-peat.

After Tyresö dominated the first half against a Wolfsburg team that hardly had a sniff at goal, the German side came out of halftime flying, scoring twice in the opening eight minutes of the half to level the match.

Alexandra Popp got her head on the end of Anna Blässe’s cross just 90 seconds into the half to get Wolfsburg back into the game, and Müller leveled the game in 53rd minute. U.S. defender Whitney Engen held Tyresö’s line high – near midfield – and Müller collected an over-the-top ball before beating Tyresö goalkeeper Carola Söberg.

“First of all credit to Wolfsburg,” Tyresö coach Tony Gustavsson said postgame on Eurosport. “I think we were a little bit too careful. We talked about it to be brave. That early goal gave them energy.”

Marta nearly single-handedly grabbed the title for Tyresö, scoring once in each half on brilliant individual efforts.

Her second goal calmed the Swedish side after the shaky start to the second half. The Brazilian put Tyresö back in front just three minutes after Müller’s equalizer after she twisted Wolfsburg defender Luisa Wensing, cut back to her right foot and curled her shot to the back post and around an outstretched Almuth Schult to give Tyresö a 3-2 lead. 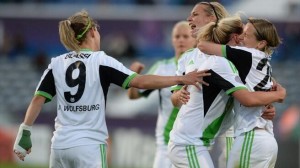 But Wolfsburg would not be denied — nor would another equalizer come without controversy. Tyresö coach Tony Gustavsson brought on Madelaine Edlund in the 67th minute and has he did, U.S. international and Tyresö right back Meghan Klingenberg stepped off due to injury. Tyresö played the ball out, but Wolfsburg took the throw-in, and Popp caught the sub Edlund sleeping at the back post, slipping a ball to Verena Faisst for the finish. Gustavsson exchanged words with Wolfsburg boss Ralf Kellermann on the sideline, and postgame Gustavsson said the move was “unsportsmanlike” from Wolfsburg.

With momentum back in favor of the German side, Nadine Keßler beat Tyresö left back Line Røddik – who struggled all night – and played a square ball to Müller for the tap-in game-winner.

The goal ended the dreams of a Tyresö team that saw this final as its only shot at European glory due to a financial crisis. Klingenberg, Engen, Christen Press, Marta, Caroline Seger and Verónica Boquete will all leave the club this summer. Tyresö failed to secure a permit for first-division football beyond 2014.

Two moments of individual brilliance in a three-minute span of the first half put Tyresö firmly in control early. As Wolfsburg struggled in the midfield — especially following Lena Goeßling taking a gash below the eye 15 minutes in — it was Marta and Boquete who scored in the 28th minute and 30th minute, respectively.

Boquete helped create the first goal, stealing the ball from Wolfsburg midfield general Keßler and finding Marta, who dribbled through three Wolfsburg defenders at the top of the box before finishing to the far post with her right foot.

Two minutes later, it was Press who made something of nothing. Collecting the ball alone up top on the right flank, Press cut inside toward three retreated Wolfsburg defenders. As Nilla Fischer guided her toward the right side of the field, Wensing couldn’t deal with Press, who beat Wensing on the endline and crossed the ball to a wide-open Boquete for the tap-in.

“We were a bit slow in the second half and maybe we thought the game was won at 2-0 and we were made to pay for that,” Marta said. “Overall I thought we put in as good a performance as we could do at the end of the night.”

This is the eight time in 13 years of the new format of the UEFA Women’s Champions League that a German team has won the title. Umeå IK, led by a young Marta a decade ago, is still the only Swedish team to ever champion Europe.