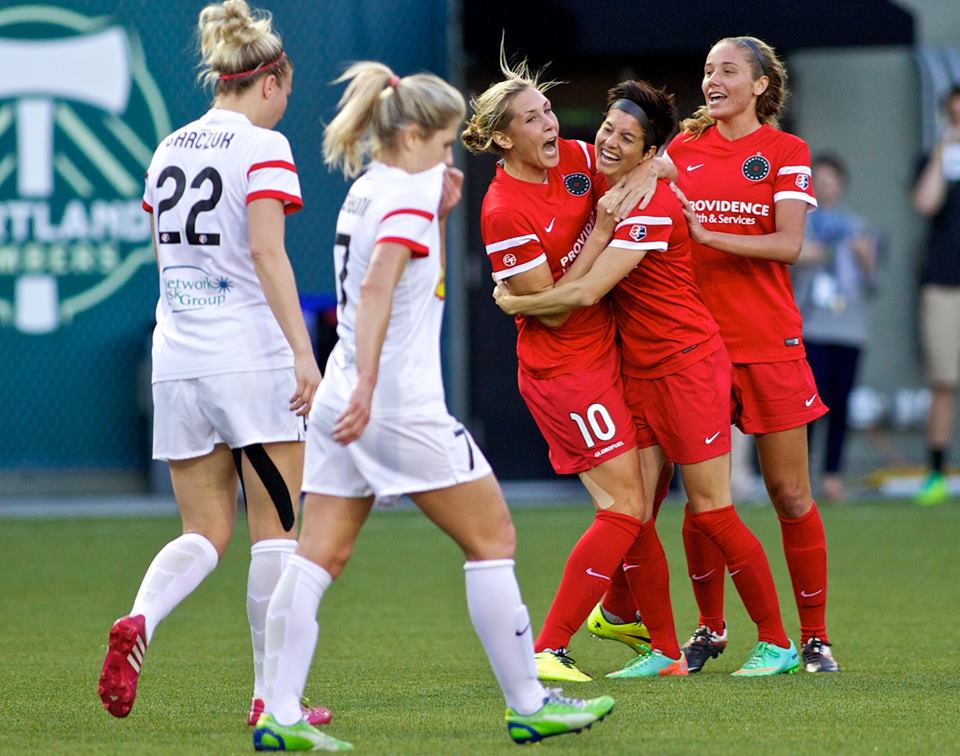 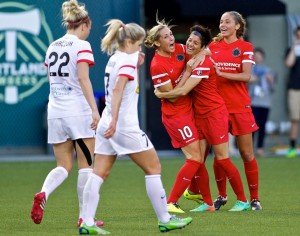 Allie Long and Jess McDonald scored their 4th and 5th goals of the season respectively to lift the Thorns to a 2-1 victory over the Western New York Flash in front of 10,920 on Wednesday night at Providence Park.

The Thorns improved to 4-1-2 (14 pts) and took 2nd place despite Long and McDonald being their only goal scorers on the season.  McCall Zerboni scored her 1st of the season for the Flash, who dropped to 3-3-1 (10 pts) and are on a two-game losing streak for the first time in NWSL

Long opened the scoring in the 16th minute with a clinical, one-touch finish on Angie Kerr’s through ball.  Sinead Farrelly started the play with good hustle to keep a ball from rolling out of bounds and then some good work to find Kerr in space centrally.  Long was returning to the lineup after missing her first Thorns match last week with a balky hamstring.

“I thought Allie Long did a great job underneath (Christine Sinclair), and they have a really good understanding with each other,” Thorns coach Paul Riley said. postgame

The goal began a stretch that saw the Thorns dominate and the Flash were lucky to get to halftime down only 1-0.  Christine Sinclair, still scoreless in NWSL this season, had two chances snuffed out by aggressive tactics by rookie Kelsey Wys, who would make a strong save in open space on Sinclair late in the match.

Wys, though, made a crucial mistake just after halftime that helped stake the Thorns to a 2-0 edge.  In the 49th minute Amber Brooks sent a long free kick near the top of the 6-yard box that Wys came out for but could not corral.  A gaggle of players attempted to play it near the goal line and it appeared to deflect off Long and then McDonald and in.

The Flash got one back in the 59th when they worked the ball from Wys all the way into goal without a Thorns touch.  Brittany Taylor’s long ball set the stage and Zerboni finished it when she was allowed too much space inside the penalty area and easily converted in a ball from Kristen Edmonds.

The Flash upped their play once they cut the lead to 2-1, but could not solve Nadine Angerer for an equalizer.  The German keeper made one strong save on Abby Wambach, and denied Wambach on another play when it seemed she may have been about to get burned for coming off her line before she managed to lunge forward and head it out of danger a step above the 18.  Another Flash chance got caught up between Taylor’s feet and rolled harmlessly to Angerer, where a harder shot may have found the back of the net.

The Thorns remain home to host Sky Blue on Saturday, while the Flash will remain in the Pacific Northwest and try their luck in Seattle on Sunday. Western New York travels to Portland again on June 7, when Alex Morgan is expected to be available for Portland.