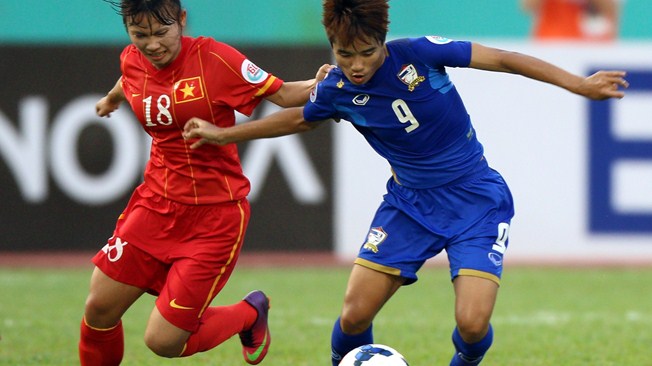 Thailand qualified for its first Women’s World Cup with a 2-1 victory over Vietnam on Wednesday in the AFC Women’s Asian Cup fifth place game.

Already qualified for the 2015 Women’s World Cup from Asia are the four semifinalists: Australia, China, Japan and Korea Republic. They, along with Thailand, join World Cup hosts Canada as the first teams officially part of next summer’s tournament.

Traditional power Korea DPR would have likely replaced Thailand as one of the five Asian teams in the Women’s World Cup that will expand to 24 teams for the first time in 2015, but the North Koreans are banned from the tournament.

FIFA banned North Korea from the 2015 World Cup after five of their players at the 2011 World Cup tested positive for steroids from traditional musk deer gland therapy. North Korean officials at the time claimed that the five players were struck by lightning at training camp and needed the steroids for recovery.

North Korea’s Jong Pok Sim, Hong Myong Hui, Ho Un Byol and Ri Un Hyang were suspended for 18 months, and Song Jong Sun was deemed ineligible for 14 months. The team doctor was also banned for six years. North Korea’s soccer federation was fined $400,000, a fine that “exactly corresponds to the prize money the association would have received for their 13th place in the final ranking of the Women’s World Cup in Germany,” FIFA said at the time.

On Wednesday, Thailand scored in the 48th and 65th minutes before qualifying host nation Vietnam got one back in the 86th minute. Pikul Khueanpet opened the scoring before Kanjana Sung-Ngoen doubled the lead. That game-winning and World Cup-clinching goal turned out to be a miss-hit cross that found its way into the net. Tuyet Dong’s goal for Vietnam was a screamer off the underside of the crossbar.

Vietnam pressed on for an equalizer in stoppage time, but after a valiant effort against Australia on Sunday and against Thailand in the playoff, the home side was denied a chance to clinch a first World Cup berth of their own in front of 18,000 fans.