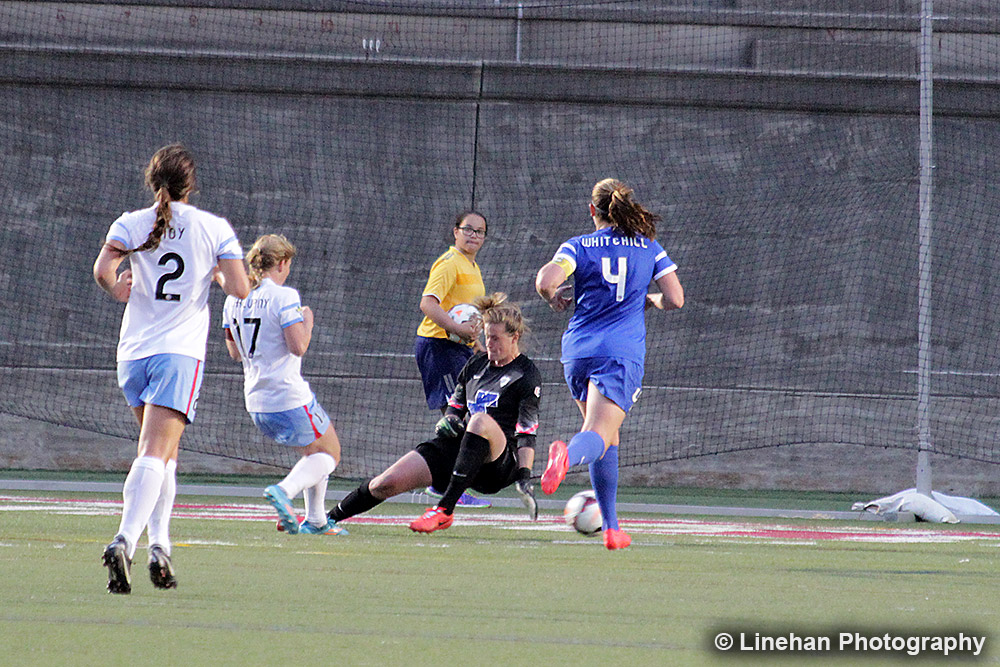 Lori Chalupny and Jen Hoy scored on the Breakers (again) in a another Red Stars win at Harvard Stadium. (Photo Copyright Clark Linehan for The Equalizer)

Same teams, same venue, same week — and the same result. Even most of the goal-scorers were the same. The Chicago Red Stars beat the Boston Breakers 4-1 on Sunday at Harvard Stadium for the second time in 72 hours.

Chicago moves into sole possession of second place with 13 pts. from seven games, while the Breakers now alone in last place on 3 pts., following the Houston Dash’s tie with FC Kansas City on Sunday.

Michelle Wenino, Jen Hoy and Lori Chalupny all scored for the Red Stars — just like in Chicago’s 3-1 win on Thursday — and Zakiya Bywaters added a late goal to further cushion the score later.

Just like Thursday, Wenino scored a scrappy goal on a tap-in after the Breakers’ defense failed to properly clear a ball inside of the 6-yard box. Wenino’s opener came in the 23rd minute, but the Breakers briefly got back into the match in the 35th minute. Red Stars defender Sam Johnson was called for a handball in the box and Heather O’Reilly stepped up to finish the penalty kick past goalkeeper Karina LeBlanc.

Chicago, however, took over in the second half. Adriana Leon played a ball in behind the Breakers’ defense for Jen Hoy, who out-ran midfielder Joanna Lohman and slotted her shot past goalkeeper Alyssa Naeher for what would eventually become the game-winning goal.

Seven minutes later, Vanessa DiBernardo found Red Stars captain Lori Chalupny — in what looked like an offside position, but the Red Stars captain was deemed onside by the assistant referee and calmly placed the ball past Naeher.

Bywaters, the No. 1 pick in the 2013 NWSL Draft, ensured the score would be an ugly one for Boston with her first goal of the season. As Boston pushed forward trying to get back in the game, the ball popped out to Bywaters in the 85th minute, and she turned Bianca D’Agostino and sprinted 65 yards with the ball, out-running D’Agostino and Lianne Sanderson before tapping the ball around Naeher and into the net.

“The group is gradually starting to believe in themselves,” said Red Stars coach Rory Dames. “Our players up front are starting to find form. It was always going to take time where we’d settle into a rhythm and build some belief.”