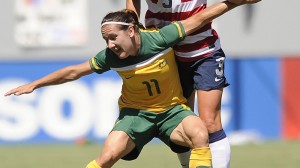 Australia has qualified for the 2015 Women's World Cup. (Photo Copyright Patricia Giobetti for The Equalizer)

Australia and defending champions Japan have qualified for the 2015 Women’s World Cup with victories on Sunday at the Asian Cup.

Australia defeated valiant hosts Vietnam 2-0, while Japan thrashed Jordan 7-0 to book tickets to Canada next summer. They join South Korea and China – who became the first to qualify for the tournament on Saturday, along with hosts Canada. A fifth qualifying team from Asia will be decided on Wednesday in a match between Vietnam and either Thailand or Myanmar.

Japan won the group on goal differential and will play either China or South Korea in Thursday’s semifinal. Australia will play the Group B winner.

Australia needed a bit of help to get on the board in the 42nd minute, earning a dubious free kick 10 yards from net after a purported back-pass was handled by Vietnam goalkeeper Tuyet Mai. Emily Van Egmond hit the shot that Tuyet Mai miraculously got a piece on, but a Vietnamese defender cleared the ball off the line, into her own player and into the net. Katrina Gorry then hit a booming shot in the 90th minute to secure victory.

“We had seven or eight chances ourselves but our execution in the final third wasn’t the best and let us down a little bit,” Australia coach Alen Stajcic said. “We were good at times but a bit scratchy at others and our technique could have been better to make the most of the opportunities we had up front.”

For Japan, Emi Nakajima, Mizuhu Sakaguchi and Chinatsu Kira all scored twice in addition to an own goal as the Nadeshiko cruised past Jordan.

“The young players really showed their ability and it is good preparation for our next game,” Japan coach Norio Sasaki said.

“In the group stages I have used all the players in my squad which I think is very important if we are to stand any chance of winning this tournament.”