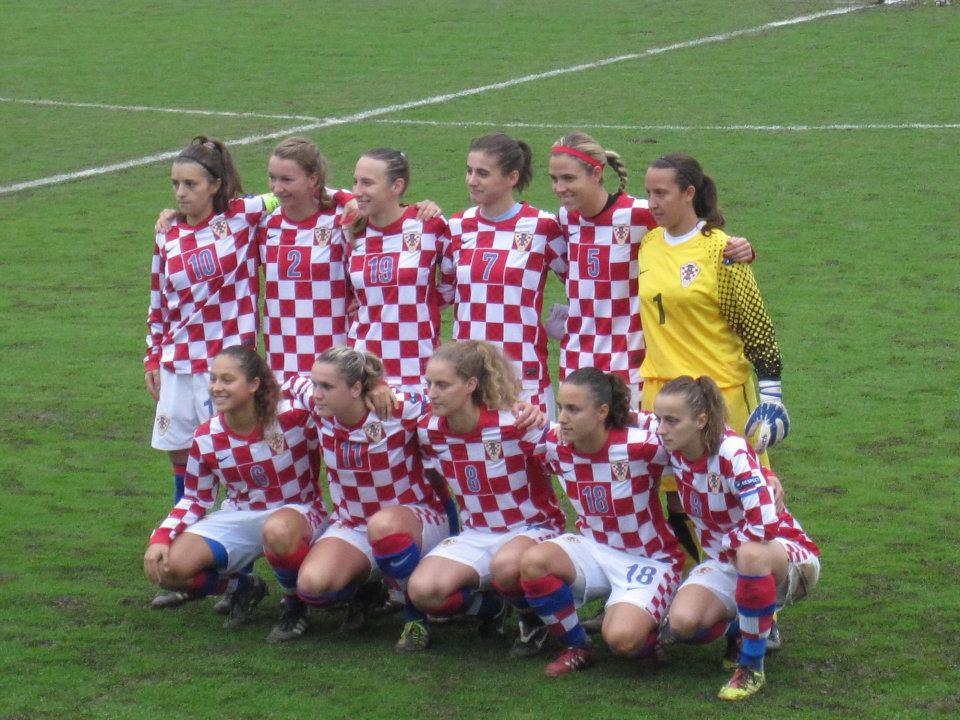 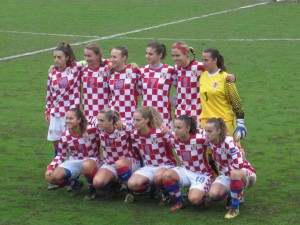 Croatia notched a 3-0 road win over Slovenia on May 8 during a UEFA Women’s World Cup Group 1 qualifier for their first win in six matches. Though they are now fourth out of six teams with 4 points, trailing reigning European champions Germany as well as Russia and the Republic of Ireland, one of the scorers is of interest to North American followers.

Hercigonja-Moulton was a high school sophomore in 2009 when her Croatian-born mother (from Čakovec, north of Zagreb, where she still has relatives) helped to arrange a tryout for her with the Croatian U-17 national team.

“It was a two-week camp with trainings twice per day,” Hercigonja-Moulton, who mostly plays center back but can also play in the midfield. “It was actually preseason training for the team and they had brought in other new players besides me. I felt welcomed even though I did not speak Croatian well yet. Everyone was very warm as is the Croatian way. It was fun and productive, and I was happy that they asked me to play in the European qualifiers that year. They told me that I had a good head both physically and mentally, meaning I was good at heading the ball but also that I was a smart player.”

A spot with the U-17s eventually led to a position with the full national side for Hercigonja-Moulton, who was born in Los Angeles but raised mostly in North Carolina before attending high school in Miami, Florida. She could have qualified to play for the U.S., Croatia or Jamaica, where her father was born.

After three years of commuting nine hours by air between Miami and Zagreb for national team commitments, she made the choice to continue her education in Croatia at the University of Zagreb, where she studies mass communications and public relations and is due to graduate this year. Hercigonja-Moulton explained her rather unique decision to combine a top national women’s league and college abroad rather than at home.

“While the huge benefits of my European journey are obvious, like playing first class football with the women’s national team and connecting with my Croatian roots, I learn about myself and the subtle differences or benefits a little each day; and these are the insights that I suspect will shape my adult life in the most meaningful ways,” she said.

Hercigonja-Moulton surely would have had a free ride to a top university in the United States but showed her commitment to Croatia by taking courses in a second language and paying for her first year’s tuition herself.

“Being half-Croatian, I had prior knowledge to the Croatian language, so I didn’t totally struggle my first year when I paid a foreign student tuition [at the University of Zagreb],” she said. “I satisfied all the criteria that first year and became a resident, so the second and and third year tuition was free.”

Unlike in the United States, universities in Europe do not have extensive intercollegiate athletics programs, so Hercigonja-Moulton has played three years of club ball with Dinamo Maksimir in Zagreb in the 1. HNLŽ or Prva hrvatska nogometna liga za žene (First Croatian Football League for Women), which she initially joined because “they were a very strong side at the time with four to five women’s national team members and coached by then women’s national team coach, Dean Klafurić.”

Dinamo Maksimir finished fourth in the eight-team 1. HNLŽ during the recently completed 2013-14 season, with 24 points on 8 wins and 8 losses in 16 games. Osijek won the title with an undefeated record of 16 wins, 0 ties and 0 losses for 48 points, scoring 135 goals while allowing only 4. This was Osijek’s eighth consecutive league title.

Hercigonja-Moulton is not done in Europe, however, because along with her national team duties, she has already trialed with a Frauen-Bundesliga side which she hopes to join for the 2014-2015 season, which begins this fall, once her studies are completed.

Croatian-American Hercigonja-Moulton has become a mainstay in the Croatian national team program by moving abroad at a young age to pursue college and top league ball, rather than stay and study at a university in the U.S. While many diaspora are discovered by national team coaches through tours or contacts with local coaches, she made the first move and it could now lead to a job with a German league side, dovetailing nicely with continued games for the national team. This presents a different way for diaspora to perform for their country of choice, rather than staying in North America and possibly missing some camps and games. Hercigonja-Moulton has taken the concept of “study abroad” — usually meaning a semester or year at a university — to a much different level, with an extensive load of soccer study along with her journalism and political science curriculum.

The Lowdown: 4 reasons to be awed by the Reign
New US women’s coach to be named on Friday