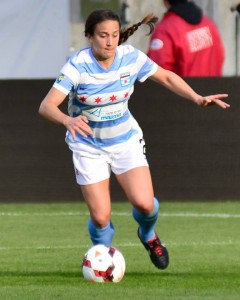 Hoy stretched to reach for a ball from 18 yards out and lobbed Dash goalkeeper Bianca Henninger, who was otherwise brilliant on the evening.

Melissa Tancredi made her NWSL and Chicago Red Stars debut when she entered the match for rookie Hayley Brock in the 60th minute. Tancredi, a Canadian international forward, missed all of 2013 and the beginning of this season to finish chiropractic school.

Julie Johnston came within inches of putting Chicago ahead in the 8th minute when she headed Vanessa DiBernardo’s free kick back toward the near post.

After Hoy’s goal, Brock nearly doubled Chicago’s lead with the final kick of the first half, but she was denied by the crossbar. Lori Chalupny hustled to keep the ball from crossing the endline for a goal kick, and whipped in a near-post ball that found Brock’s right foot for the redirect.

Chicago continued to pressure the Dash on the other side of halftime, but Henninger — filling in for the injured Erin McLeod — came up huge all night. The Dash ‘keeper raced 40 yards off her line in the 51st minute to slide-tackle the ball away from Chalupny and deny a 1-v-1 opportunity after Chalupny broke out on the counterattack.

Adriana Leon missed an empty net from a tough angle when she one-time a rebound from another Henninger save on Chalupny in the 59th minute, and she denied Hoy a second goal two minutes later in a 1-v-1 showdown. The 23-year-old former Santa Clara goalkeeper also denied Zakiya Bywaters with a kick-save in the 77th minute.

With the win, the Red Stars jumped from seventh to fifth place, leaving Houston tied with the Boston Breakers for the fewest number of points (3) in the league as the season approaches the quarter mark.