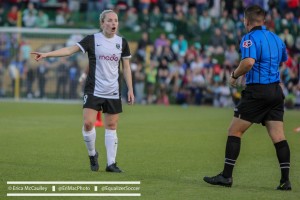 Kim Little's 90th minute goal lifted Seattle past Portland and to a 6-0-0 record. (Photo Copyright Erica McCaulley for The Equalizer)

A wildly entertaining match at Providence Park was decided in the 89th minute when Kim Little got in on a breakaway and lifted the visiting Seattle Reign FC to a 1-0 victory over Portland Thorns FC.

Little ran onto a the ball after a bad giveaway by Rebecca Moros to Beverly Goebel and Little calmly dribbled around Nadine Angerer before tapping in her league-leading 5th goal of the season. The Reign are now 6-0-0 (18 points) and stand alone as the only undefeated side in NWSL. The Thorns second-place dropped to 2-1-2 (8 points) and are a full 10 points behind the Reign with a match in hand.

Portland beat Seattle in all four meetings in 2013.

“Just one slip, unfortunately,” Thorns coach Paul Riley said. “I don’t think there was much between the two teams. I think we played the better football; they played a lot of long-ball tonight…but they are good. They are top of the league for a reason.”

The first half saw both teams knock the ball around a good bit but there was little in the way of good chances. The second half was a different story as both teams attacked relentlessly throughout. Only some intense defending and a few poor finishes kept the match scoreless until the stroke of stoppage time.

The best Thorns’ chance came almost immediately after the restart. Amber Brooks fired a corner kick that Christine Sinclair redirected on frame, only to have defender Elli Reed clear it off the line at the near post. The best Reign chance before their goal saw Jess Fishlock play Beverly Goebel into the largest chunk of open space either team had all night. Goebel walked in on Angerer but appeared to get caught between good options and wound up doing little more than tapping it towards the FIFA World Player of the Year.

Hope Solo earned her fourth shutout from six matches a year after the Reign went the entire season without keeping a clean sheet. Her best save was a leaping deflection over the bar on Jess McDonald. Another sequence saw McDonald and Sinclair crash to the ground together after they both challenged for a ball lofted into the left side of the box.

Both teams were down several players, and many had played international matches as recently as Thursday.  Reign coach Laura Harvey gave Danielle Foxhoven her first Reign start and eventually replaced her with Kate Deines.  That substitution was coupled with Little moving up to play up top.  And that’s where she was to take advantage of the late giveaway that led to the only goal of the night.

Having swept their three-match road trip, the Reign return to Memorial Stadium on Wednesday to host FC Kansas City, another club that swept them over four matches in 2013. The Thorns are in Houston on Wednesday for a rematch of their season opening match, a 1-0 Thorns win.