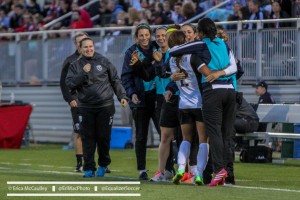 The Pacific Northwest rivalry never gained traction in 2013, but a Reign roster redo has triggered more scenes like this one after a goal in Washington. (Photo Copyright Erica McCaulley for The Equalizer)

The Pacific Northwest rivalry that never really caught fire last season returns as a battle of unbeatens with early-season supremacy on the line and the full attention of the NWSL world as the only match of the night. Though neither have lost the Thorns have drawn twice so if the Reign win they will be a full 10 points clear with a 7-point edge in maximum available points. Thorns’ coach Paul Riley fanned the new flames a bit by suggesting during the week that the Reign’s perfect start was a product of playing a soft schedule. The Thorns have already earned a win and two draws against the other three playoff teams from last season.

What to watch for: The drawback to this one is the absence of Nahomi Kawasumi to the Asian Cup and the slew of players on both sides returning from Thursday internationals. That will make it difficult to speculate on lineups and matchups. The Thorns have been pushing their outside backs high, something the Reign could take advantage of with their ability to produce quick counterattacks. That means the onus will be on Allie Long and the Thorns’ midfield to hold possession and keep the Reign’s defensive mids from controlling the park.

It’s crunch time early for Sky Blue, who have only one win out of six matches and recently took just 4 of 9 points during a three-match home stand across eight days. Seeing the Flash on the calendar for Sunday can’t be too soothing for a struggling side. After squeezing out a 2013 season-opening win on an own goal and penalty save, Sky Blue lost the next four to the Flash, none of which were particularly close. If there is a snippet of good news for Sky Blue it is that they should make out favorably in terms of absent players. The Flash’s Samantha Kerr owned Sky Blue’s Caitlin Foord last season but both are with Australia. Lydia Williams is gone with Australia, too, meaning the Flash will unveil rookie Kelsey Wys in goal. And Carli Lloyd will serve the back-end of a two-match suspension.

What to watch for: Angela Salem and McCall Zerboni are the keys to this one. If they duplicate the midfield pressure they put on FC Kansas City midweek it could be another long afternoon for Sky Blue whose forwards have yet to get off the mark this season. Taylor Lytle and Katy Freels have enjoyed moments of magic in the Sky Blue midfield but lack consistency, something that won’t be easy to find with Salem and Zerboni shadowing them.

The banged up Dash will try their luck in Chicago against a Red Stars club that has neither scored nor conceded more than one goal in any match this season. Right knee pain limited Holly Hein to bench duty last weekend against Kansas City and Osinachi Ohale—who was also on the injury report thanks to an ankle sprain—was handed a straight red card for taking down Amy Rodriguez from behind as the final defender. That means Ohale will sit this one out, leaving Randy Waldrum with more work to do trying to hold the Dash together until they get their health and U.S. internationals.

What to watch for: The Red Stars are solid in back despite a revolving door of defenders in and out of the lineup. Where they have struggled is making final passes and finishing chances. They are deceptively quick too which could be a benefit against a very raw Dash back line. Likely starting goalkeepers Erin McLeod and Karina LeBlanc are vying for the call to start for Canada in the World Cup with McLeod presumably holding the current advantage.

The Blues had the better play in their first meeting but still lost 3-1. That is not something the 2013 Spirit were ever able to do. It is not likely to work twice against the same team though and since the loss in Washington, FC Kansas City reverted back to their 4-2-3-1 setup and have looked much more comfortable.

What to watch for: The midfield battle will be interesting and could be determined by which players recover quicker from Thursday’s U.S.-Canada friendly. Crystal Dunn showed her ability to dominate on the flank and figures to soon form one of best flank combos in the league with Diana Matheson. But Matheson played the full 90 for Canada. For Kansas City Lauren Holiday earned her 100th cap on Thursday but that could leave her sluggish especially after being sick early last week.

Not playing this weekend:  Boston Breakers

Canada’s Scott on Buchanan: ‘future is bright’
England among 5 countries to bid on 2019 World Cup