A-Rod bursting back onto scene after pregnancy, but goals remain long-term 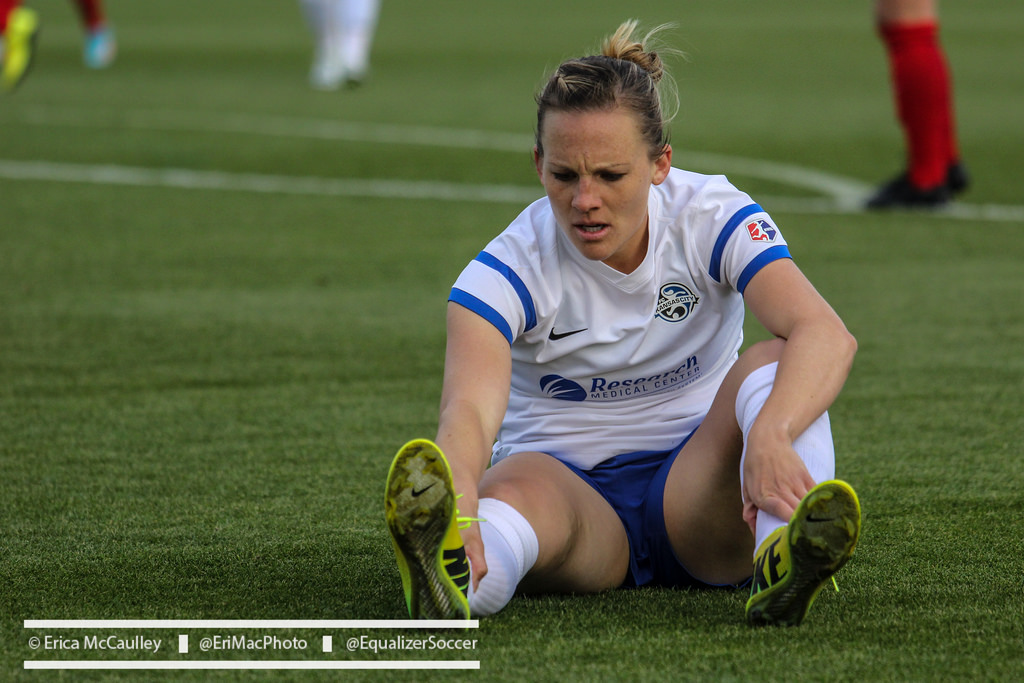 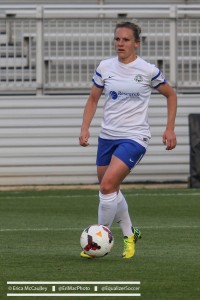 Amy Rodriguez is tied for the NWSL lead in goals with four in her first five games. (Photo Copyright Erica McCaulley for The Equalizer)

Little did she know that her late equalizer in the 2011 WPS final – which her team, then the Philadelphia Independence, would lose on penalty kicks to the Western New York Flash – would come in her last professional game for over two and a half years.

But that’s how long it took, with the drought ending on April 12, 2014, the opening day of the new National Women’s Soccer League season.

WPS folded in 2012, and Rodriguez – allocated to Seattle Reign FC at the inception of NWSL as a U.S. international – announced in early 2013 that she was pregnant and would miss the entire inaugural season of the new league.

So her April 12 goal for her new team, FC Kansas City, was a culmination of recovery that kicked into overdrive in the fall and through the winter months to get Rodriguez to the unlikely spot where she now stands: tied for the league goal-scoring lead with four goals in five games, and showing no signs of having missed a step.

“I have been recovering quite well. I didn’t know what to expect after having my baby and coming back and playing in our pro league, but I’m surprised at how I’ve recuperated and gotten back to the way I am now,” Rodriguez said from Winnipeg, Manitoba, where she is with the U.S. national team ahead of Thursday’s game against Canada. “I still don’t feel like I am quite at 100 percent; I think I’m almost there. But I’m feeling pretty good and I’m excited for the rest of the season.”

Rodriguez’s adaptation to her new life has been an on- and off-field process.

She is getting used to being a mom, and leaning on fellow U.S. national team moms like Christie Rampone for advice. Rodriguez’s husband, Adam Shilling, still lives in their family’s home in California during the NWSL season, when Rodriguez temporarily takes on something of a single mother role in Kansas City with her 9-month-old boy, Ryan.

On the pitch, Rodriguez said she went from zero to 80 percent very quickly, but “that last 20 percent has been all the little fine details – the little finishing touches, literally finishing. Trying to get everything clean and precise.”

And while she isn’t content with her current form — choosing instead to focus on larger goals with the national team — A-Rod’s signature, energetic fist-pumping goal-celebration has been seen as many times this season as it was in the entirety of the 2011 WPS regular season and playoffs (a year in which she played more limited minutes due to the World Cup). She also has a goal this year for the U.S., scoring on Feb. 13 in an 8-0 win over Russia.

Rodriguez’s comeback is one of the best early stories of the new NWSL season. It’s also one of the most surprising, unless you’re FC Kansas City coach Vlatko Andonovski. He says he expected big things from the former No. 1 pick in WPS, who was acquired in a November trade that sent Kristie Mewis – now a Boston Breaker – to Seattle.

“I’m sure many people are surprised for someone coming off of pregnancy, but I am not surprised,” Andonovoski said. “I know who she is, and I’ve seen her play in the past…she came in with the right mindset, the right mentality, and she wanted to prove that she is ready to get back on track, which obviously she is.”

Helping the United States win the 2015 World Cup is Rodriguez’s ultimate goal, she says, but the national team scene is very different from the one she left in late 2012.

Pia Sundhage is no longer coach. Nor is Tom Sermanni, who only served as coach for a few months of Rodriguez’s comeback. And Sydney Leroux and Christen Press have emerged to push Abby Wambach and the currently injured Alex Morgan for starting forward spots, which Rodriguez was doing in four appearances off the bench at the 2012 Olympics.

But there’s something different – sharper, even – about Rodriguez in the early days of her comeback. She credits her Kansas City teammates, a group similar to the one that made things look easy through much of the 2013 regular season.

Andonovski, however, sees a different element developing in his new striker’s game. A recent switch back to Andonovski’s trademark 4-2-3-1 helped FC Kansas City (2-3-1, 7 pts.) win two straight before Wednesday’s loss to Western New York in a game that lacked several stars, including Rodriguez.

Rodriguez is known as a direct, athletic player who can beat defenses with pace over the top. But that isn’t how the possesion-oriented FC Kansas City’s plays, and her coach sees more than that in her as well.

“It’s hard for us to judge whether she’s surpassed herself, but I think she’s on the way to surpassing herself and that she’s on the way to do much better than she’s done in the past,” Andonovski said. “With the style of soccer that we play and also the formation, I think that it’s not that we are just going to see the Amy Rodriguez that everyone knows. We’re going to see a little bit different side of Amy, where she’s involved in the buildup and she’s involved in the play; she doesn’t just score goals, but she’ll also make things happen for other players.”

If that element of Rodriguez’s game develops, and her run of form continues, A-Rod 2.0 will be another layer of a U.S. attack that already can’t squeeze all of its talent onto the field.