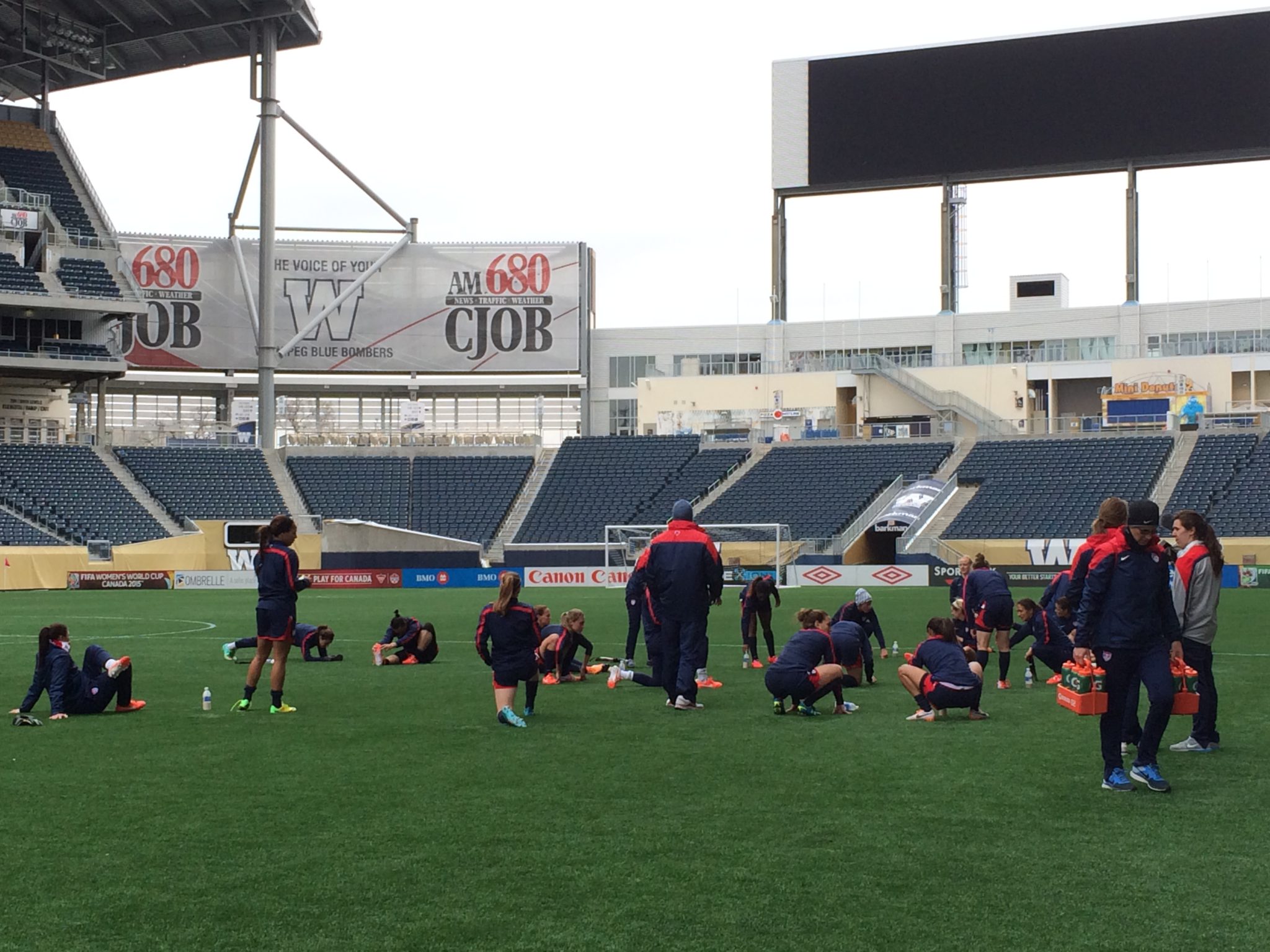 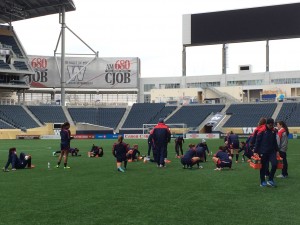 The U.S. women train in Winnipeg ahead of Thursday's match vs. Canada. (Photo Copyright Harjeet Johal for The Equalizer)

WINNIPEG, Manitoba – The two most successful nations in CONCACAF will meet at Investors Group Field on Thursday, May 8, at 8 p.m. ET in front of an expected crowd of 30,000 fans.

When it comes to sports, Canada and the United States have forever been linked as rivals, heightened by the 2012 Olympic semifinal won by the U.S. Canada is ranked No. 7 in the world while the United States retained their No. 1 spot in the most recent FIFA rankings.

This will be a homecoming for Desiree Scott. The Winnipeg native is expecting family, friends, former coaches, and teammates to be in the crowd. Scott has been inundated with local media requests, and she estimates that a few hundred supporters will get to see her play for Canada for the very first time. The Notts County midfielder talked about how special this match is to her, and the people who have supported her throughout her journey to the national team.

“For team Canada it’s the first time they’re going to see me suit up (in person),” Scott said. “They’re excited to finally see the team, and us perform, especially against the Americans. It’s a dream come true for me to finally be in Winnipeg and to be able to have them in the stands, and actually know people that are here to support me. It’s going to be a great experience, and one that I’m going to hold for a long time.”

Hope Solo is one player that has previously played a match in Winnipeg. Solo participated in the Pan-American games in 1999 when she was just 17 years old. Solo and her teammates walked away with a gold medal and she is looking forward to playing in front of a large crowd on Thursday.

“I have nothing but great memories,” the U.S. No. 1 said. “Even at that age they filled the stands, and the fans came out. It was quality soccer, and a quality tournament. Fast forward over a decade, and I expect the same thing. Canada has really got behind the women’s team. We’ve seen a lot of support over the last couple of years, and I think it’s a great rivalry in women’s sports. There is no better place to play than Winnipeg, because the fans do come out.”

Solo and Christine Sinclair are two of the best players at their respective positions. Both players put on a brilliant show in Manchester, England during the 2012 Olympics, and they are integral parts of their team’s success. Solo and Sinclair have been rivals since their university days, and they have a long history of carrying their respective national and club teams.

When Thursday’s match has concluded both players will hop on a plane to the Pacific Northwest as the top two NWSL teams kickoff in Portland on Saturday afternoon. The Seattle Reign keeper has high praise for Sinclair, a Portland Thorn, and she holds her abilities in a massive regard.

“I’ve said for a long time that I believe in my humble opinion that Christine Sinclair is the best player in the world,” Solo said. “You don’t always get to see how brilliant she is, because she doesn’t always have the support players, but I think now I think she’s starting to get the support players that she needs to really highlight her own play. I’ve said it for a long time, that I think she’s the best player in the world. I mean that, more than Marta, because she plays both sides of the ball. Marta can score goals, but with Christine she passes, she gets assists, and she’s more of a well-rounded player, and she’s dangerous anytime she gets the ball. My hat goes off to Christine Sinclair and I’ve looked up to her, and I’ve admired her as a player for a very long time.”

The U.S. defeated Canada 1-0 in Frisco, Texas, on January 31. U.S. interim coach Jill Ellis will be hoping her side can once again shut down Sinclair. The Canadian skipper was left on an island during the match in Texas and Canada created very little offensively.

John Herdman would like to get his top scoring threat more involved in the play, as Sinclair looks to break out of a scoring funk. The Thorns striker is always trying to improve as a player, and she relishes another competitive battle between these teams, as she hopes to get some bragging rights over her Thorns teammates, Nikki Marshall and Allie Long.

“It’s fun, I’m not going to lie. It’s always a tough match — obviously, it’s a battle, but it’s fun,” Sinclair said. “You want to play the best teams in the world, especially in preparation for a huge tournament that’s coming up next year. It has a different vibe to it now that we’re all teammates in a professional environment. The world of women’s soccer is very small. You’re enemies on the field for 90 minutes, and then you can go back to being teammates and friends afterwards. It makes for some banter in the club environments for sure.” 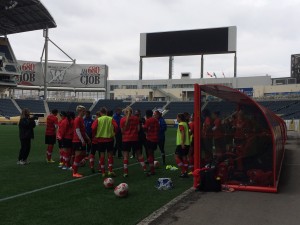 Canada prepares for the U.S. on Thursday. (Photo Copyright Harjeet Johal for The Equalizer)

Kaylyn Kyle has had a whirlwind travel adventure in the last eight days. The Saskatoon, Saskatchewan, native was traded by the Boston Breakers to the Houston Dash last Tuesday. After making her debut on Saturday vs FC Kansas City, Kyle now finds herself in Winnipeg. The central midfielder will be deployed in John Herdman’s lineup on Thursday, in her natural position, and despite her hectic schedule Kyle is more than eager to take on Canada’s biggest rivals.

“I’m so excited to have a home game in Canada and to play the No. 1 team in the world. It’s amazing, and obviously being in Desi’s hometown, she’s told us how crazy the fans are. We’re really excited to see the support, the fans, and the city get behind us for the game on Thursday.”

This match will be the first big test for Canada on home soil, as they will also host Germany, and Japan (twice) this year. This is an important match for Canada as they believe that they will have to beat one or more of the United States, Germany, and Japan when the 2015 FIFA Women’s World Cup starts next summer. The U.S. is 47-3-5 all-time vs. Canada.

“Anytime you play a top team in the world it’s a good game and you consider it a rival, and obviously you want to win games,” Kyle said. “A year out of the World Cup we want to beat as many top teams in the world that we can, so that’s why we’re playing the U.S., Germany and Japan. I think this is going to be a great test for us to start the tour at home.”

Abby Wambach can remember when games such as this weren’t big draws; the women’s game was underdeveloped, and not as recognized as it is now. The Western New York Flash forward was in a reflective mood at training this week.

“I think women’s soccer is evolving,” she said. “If you think about 10 years ago when there really wasn’t a rivalry or even a competition. To see how it’s grown and evolved has been really great. There are players on that team that have single-handily in moments put their team on her back. Christine Sinclair is growing the game in her country, and we’re trying to do the best in ours, and as long as we continue to do that and evolve as a country, then we evolve as a world, and that’s the ultimate goal.”

Wambach and Sinclair have been the go to goal-scorers for both of these teams for more than a decade. While Wambach believes that Canada has taken leaps and bounds in development, she still wants to best Canada.

“They’re our neighbors to the north, and you want to claim that turf as often as possible,” Wambach said. “Yes we’ve had a run over the last how many years, but the reality is Canada is a better team than the record shows. I think that the way that they performed in the Olympics shows that.”

Win or lose, a confident Christine Sinclair will be one of the proudest Canadians in a packed Investors Group Field on Thursday night in Winnipeg.

“It’s moments like Thursday night that make you proud you’re a Canadian. We’re bringing the best team in the world here and hopefully we can get a result.”