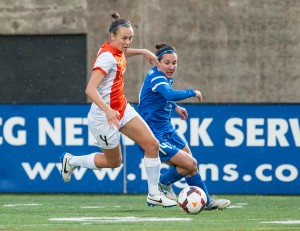 PISCATAWAY, N.J. — The Chicago Red Stars and Sky Blue FC battled to a 1-1 draw at Yurcak Field that left both teams longing for better finishing, as well as better results.

Sky Blue (1-2-3, 6 points) scored in the first half on a penalty by Katy Freels after a Red Stars’ handball in the box.  The draw concluded their three-game homestand with just four of a possible nine points.  The Red Stars (1-2-1, 4 points) equalized through Hayley Brock and have now dropped points in three straight after winning their opener.

“I think it was a disappointing result for us,” said Freels, who served as captain in Christie Rampone’s absence.  “We needed three points at home.  We played hard and I think the team fought to the end and that’s all you can ask.  (But) we’ve got to get the results, start scoring goals and capitalizing on our chances.  That will come.”

Prior to Freels’s penalty, Sky Blue had been to the spot twice this season and missed both times.  On this occasion, a handball on Julianne Sitch gave them another chance and Freels calmly stepped forward and beat Taylor Vancil for her 2nd goal of the season.

“PKs are all a confidence thing,” Freels said.  “I just went up and put it in.  Unfortunately they got one back.”

Vancil was one of several players inserted into the lineup due to the absence of the U.S. and Canadian players for Thursday’s friendly.  She showed her shot-stopping prowess early by making three saves during a Sky Blue flurry inside the opening five minutes.

“It’s a nice welcoming to the game for sure,” Vancil said.  “But it’s hard not to have a little bit of confidence after that.  It’s nice to get the first save out of the way.”

The Red Stars goal came on a great individual effort by Brock.  The Red Stars sent a free kick towards the top of the 18, where multiple players went up to challenge.  Brock wound up with the ball and adroitly turned and controlled it through three Sky Blue players.  She then made a quick turn and fired a shot high to the far post that left Cameron with little chance.

“You saw how dynamic Hayley can be,” Red Stars coach Rory Dames said.

The goal ended Chicago’s 269-minute scoreless streak and was the Red Stars’ first goal from open play this season.

Brittany Cameron also made some strong saves in her second straight start in place of Jillian Loyden.  And she continued her aggressive play, challenging balls early and allowing her defense to camp out on a higher line.

Sky Blue next heads to Western New York for a Sunday afternoon encounter with the Flash, who knocked them out of the playoffs last season.  The Red Stars are home Sunday for their first-ever meeting with the Houston Dash.