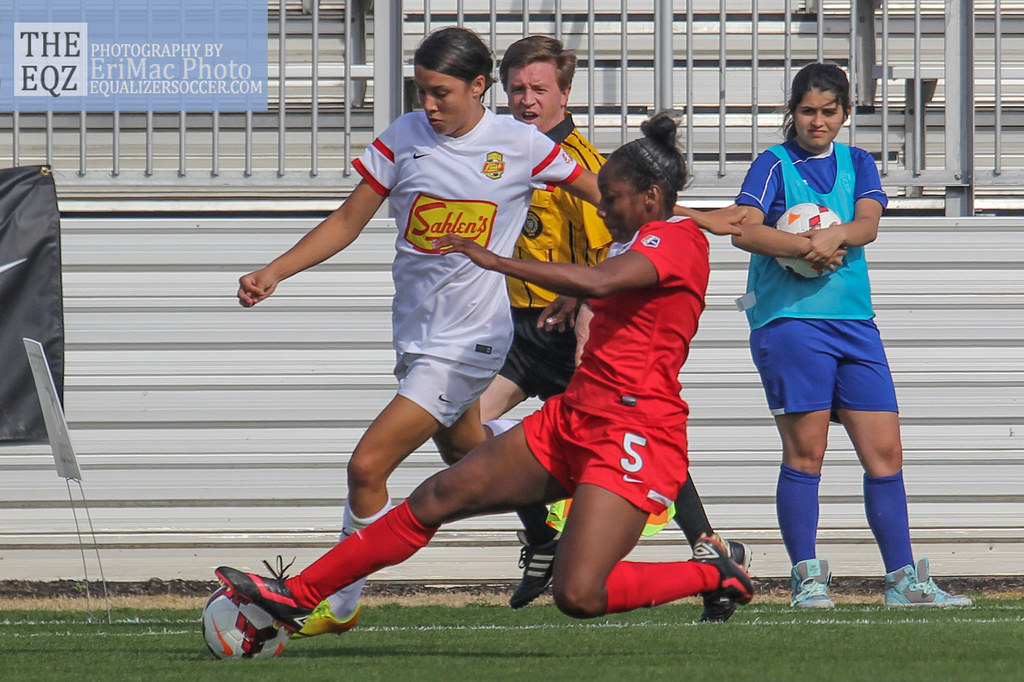 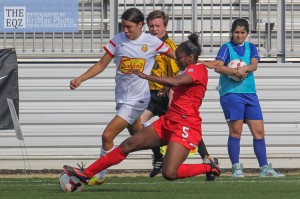 Sam Kerr had a goal and an assist in the Flash's 2-1 win over FC Kansas City on Wednesday. (Photo Copyright Erica McCaulley for The Equalizer)

ROCHESTER, N.Y. — Sam Kerr and Jasmyne Spencer each scored their first goals of the season to lead the Western New York Flash to their first home victory of the season, 2-1 over FC Kansas City.

Both teams entered the match depleted. Four Flash players – Abby Wambach, Carli Lloyd, Sonia Bermudez and Vicky Losada – and three FC Kansas City players – Lauren Holiday, Amy Rodriguez and Becky Sauerbrunn – were unavailable for the game due to national team obligations. Kansas City’s Liz Bogus was out with a hamstring injury and Erika Tymrak was held out with lower back pain.

The first half of play was slow, with both teams evenly battling back and forth for possession. The Flash gained momentum around the 30-minute mark and pressed hard offensively, creating some dangerous opportunities, two of which resulted in goals.

After three straight corner kicks taken by Adriana, Kerr found the back of the net with a header in the 38th minute. Soon after, Spencer netted a first-half stoppage time goal after a long ball from Kerr. Spencer made her way down the pitch, passing through multiple defenders and drilled the ball past Kansas City goalkeeper Nicole Barnhart from 15 yards out.

When asked about scoring her first professional soccer goal Spencer said, “It’s amazing. Right after I saw the ball go in I kind of had this rush of energy.”

Spencer also discussed the moments leading up to her goal: “Kristen Edmonds had the ball deep in our half, and I saw Sam check off with time and space, so I just peeled out and I knew she’d find me,” said Spencer. “The rest was just, get to goal as quick as I could and put it away.”

“Jasmyne was massive tonight. She came in there and had a real impact,” Lines said.

Kansas City came out eager to retaliate in the second half, and soon got their goal. In the 57th minute, the Flash were unable to clear the ball and Morgan Marlborough took advantage of the situation and put the ball into the back of the net for the rookie’s first pro goal.

Spencer looked to put the Flash ahead in the 74th minute when she broke away toward Barnhart after a bad Kansas City giveaway in the back, but Blues defender Kassey Kallman got back to break up the play.

Marlborough almost netted the equalizer in the 87th minute on a loose ball in the box, but Flash goalkeeper Lydia Williams was there to make the save.

Woman of the Match

Sam Kerr – Her offensive play was strong and on point tonight, not to mention she netted her first goal and assist of the season.