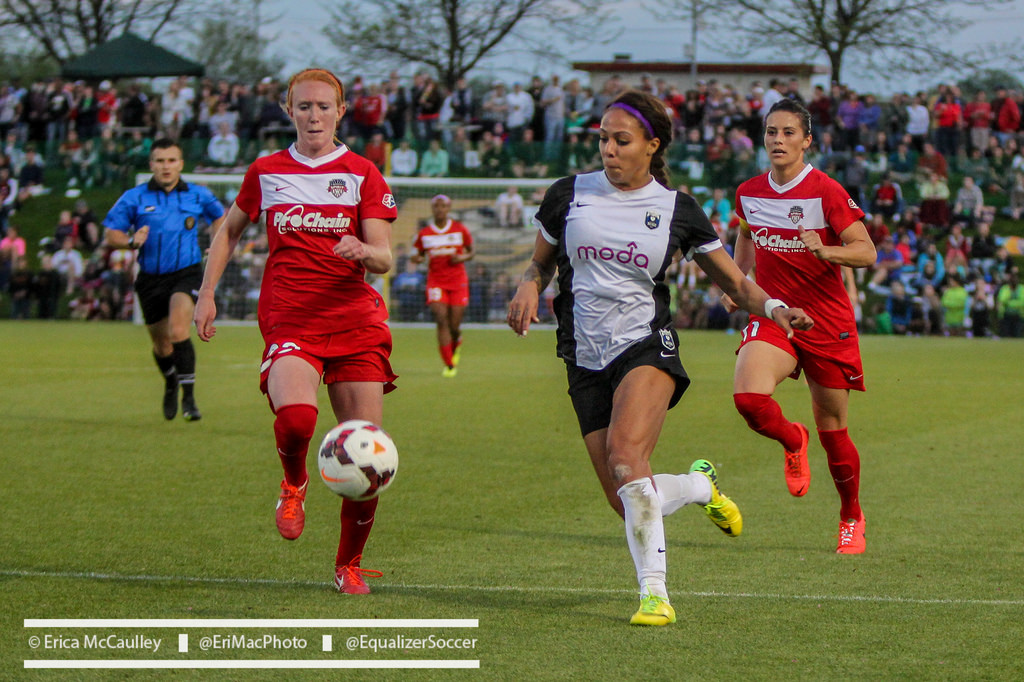 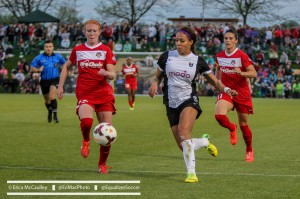 Sydney Leroux scored her first goal for Seattle on Saturday to keep the Reign perfect through five games. (Photo copyright Erica McCaulley for The Equalizer)

Sydney Leroux’s first goal of the season and first for Seattle Reign FC lifted the road team past the Washington Spirit 2-1 on Saturday at the Maryland SoccerPlex to maintain a perfect record through five games. The Reign trailed for the first time all season after Ali Krieger scored in the 53rd minute. Seattle responded almost immediately with an equalizer from Jessica Fishlock. Leroux found the game winner for Seattle about ten minutes later.

The Spirit had possession for stretches of the game Saturday in sharp contrast to the teams’ first meeting ten days ago, where Seattle dominated throughout. The Spirit enjoyed a rather noticeable advantage early on but were unable to notch a goal out of it. Seattle had some opportunities late in the first half but were unable to find the back of the net either.

Krieger broke the nil-all tie in the 53rd minute after two chances by Jodie Taylor were stopped. Hope Solo made a save on Taylor’s second attempt but the deflection fell right to Krieger who easily beat Solo.

Fishlock’s goal two minutes later was of a similar variety. Leroux headed a cross onto goal. Her attempt was blocked and fell to Fishlock who tapped it in for the score. Leroux snapped her scoring drought in the 76th minute on a 1 v 1 opportunity. Leroux then placed the ball back post and Harris had no chance to save it.

The key in the match was the quick equalizer by the Reign. Scoring first especially against a team that had not conceded from the run of play yet all season gave to Washington the momentum. Seattle’s response to the goal changed the momentum. Seattle will now go into next week’s long awaited match up against the Portland Thorns a bit more battle tested. The Thorns also remained undefeated Saturday (2-0-2) with a 1-1 draw in Rochester.

The Sprit (2-3-0) exit Saturday’s match facing an all too familiar problem: when will the forwards contribute goals? Through five games, no Spirit forward has found the back of the net.