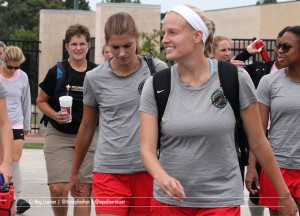 Last time Kat Williamson played at Sahlen's Stadium she was a Thorn. Saturday she'll play there as a Flash for the first time. (Photo copyright Meg Linehan for The Equalizer)

Maryland SoccerPlex
Saturday, 6:30 p.m. EDT
Series: tied, 2-2-0 (Reign lead 1-0-0 in 2014)
The first return match of the season features the undefeated Reign visiting the SoccerPlex. In their meeting 10 days prior in Seattle the Reign posted a mostly one-sided, 3-1 victory. The Spirit lost Christine Nairn to an injured quad late in that game and she did not appear in the win over the Red Stars on the weekend. The NWSL injury report lists Nairn as probable.

What to watch for: In the first meeting the Spirit were playing on three days of rest after having traveled cross-country, while the Reign enjoyed nine days off. This time the Spirit are rested while the Reign played Wednesday, albeit on the East Coast. The Spirit will be looking for a sharper effort after failing to control much possession in the April 23 meeting. As a result Diana Matheson and Crystal Dunn were rarely able to operate with enough space to be dangerous.

Sahlen’s Stadium
Saturday, 7 p.m. EDT
Series: tied, 0-0-2 (plus Thorns, 1-0-0 in playoffs)
The Flash will be the last team to open at home when they host the Thorns in a rematch of the first NWSL Championship. That match was a barnburner for an hour until Kathryn Williamson was sent off and the Thorns packed it in to protect a lead. Williamson is with the Flash now and could get her first start of the season. In other Flash news, Abby Wambach is set for her 2014 debut after sitting out the first two games with a fractured orbital bone. And Carli Lloyd will not play after being handed a two-game suspension for roughing up Vanessa DiBernardo.

What to watch for: The Thorns have been pushing outside backs Courtney Niemiec and Rebecca Moros into high positions, daring opponents to try and beat them into space. The Flash excel at flank play thanks to, among others, Samantha Kerr and Vicky Losada. It was an advantage which were unable to exploit in the final last August. As for the Thorns, rookie Emily Menges faces her sternest test to date with the likes of Wambach ready to bare down on her.

Yurcak Field
Saturday, 7 p.m. EDT
Series: tied, 2-2-1 (Breakers lead, 1-0-0 in 2014)
In another return match, Sky Blue will search for their first victory of the season after opening with two draws followed by two losses. The first loss was to the Breakers last Sunday, and in another NWSL scheduling quirk, Sky Blue played the Reign midweek while the Breakers had the week to train. Kristie Mewis, who has yet to play for the Breakers due to a high ankle sprain, is listed as doubtful, the first time she has approached a weekend this season with even a chance at playing. Also, new acquisition Nikki Washington is still in the process of relocating from Houston and will not be available. Neither will Nkem Ezurike, who will be graduating the University of Michigan.

What to watch for: The Breakers’ best attribute is their speed and they used it to stretch apart the Sky Blue defense at times last weekend. Christie Rampone did not start that match as Sky Blue attempts to manage her minutes in the midst of a painful foot injury. A full 90 from Rampone will help contain some of the Breakers’ attack. But the best way to thwart speed is to keep the ball so the onus will be on the Sky Blue midfield to hold possession and set up quality chances for a thin front line.

BBVA Compass Stadium
Saturday, 8 p.m. EDT
Series: first meeting
The Dash are back at BBVA Compass for the first time since their wildly successful debut in front of 8,097 on opening day. Now they’ll be looking for their first home victory against a Blues club that played its best match of the season midweek against the Red Stars. The Dash figure to unveil Kaylyn Kyle as a physical presence in midfield, but their backline continues to get banged up. They traded Nikki Washington and both center backs, Holly Hein and Osinachi Ohale, are questionable on the injury report.

What to watch for: This will be an interesting contrast in midfield styles. FC Kansas City like to build out of the back with short passes—something that reappeared in their last match. The Dash meanwhile play more frantically and look to challenge nearly every ball regardless of where it is. That could disrupt the Blues’ attack; or it could backfire and leave them on their heels trying to make recovery runs.