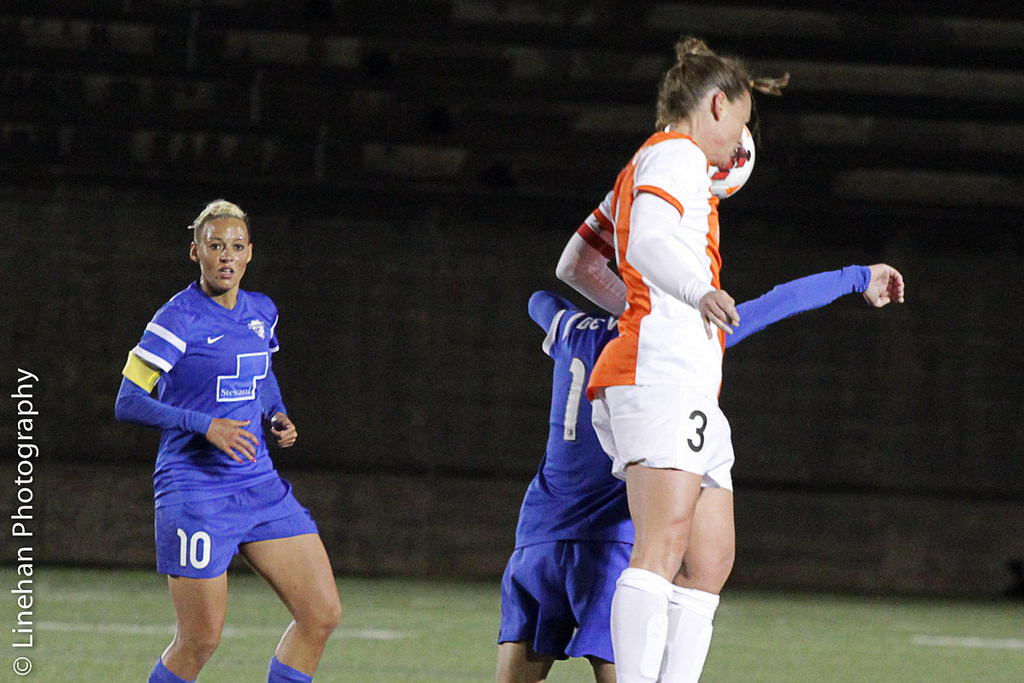 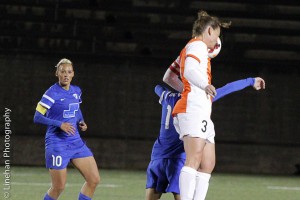 Lianne Sanderson had two goals and an assist in Boston's 3-2 victory over Sky Blue FC. (Photo Copyright Linehan Photography for The Equalizer)

Lianne Sanderson scored twice and added an assist to lead the Breakers to their first victory of the season, 3-2 over Sky Blue FC at Harvard Stadium on Sunday. The Breakers held a two-goal lead for much of the 2nd half until Ashley Nick pulled one back for the visitors deep in stoppage time. Julie King and Monica Ocampo traded early goals in the 1st half.

Sanderson created the opening goal on two fronts. First she outfoxed Lindsi Lisonbee Cutshall on the goal line to win a Breakers corner kick. The in-swinger was cleared out but Sanderson fired it back into the area where King redirected it for her 1st NWSL goal in the 14th minute.

Sky Blue knotted the match at the half hour. Taylor Lytle delivered a ball from the left flank over the top for Ocampo. Ashley Grove, starting at center back in place of Courtney Jones, looked to have position on Ocampo but the ball skipped off the wet pitch towards the Mexican forward and she was able to touch it over Alyssa Naeher who had raced outside her box.

It looked like Sky Blue was starting to take over the match for the rest of the half until the Breakers struck suddenly to take the lead in the 43rd minute. This time it was King providing the service, a probing long ball from her right back spot. Sanderson again got the better of Cutshall and beat Jillian Loden with one, confident touch.

Sky Blue replaced Cutshall with Christie Rampone—who is battling a painful foot injury—after halftime. Rampone helped thwart some of the Breakers’ attacking speed, but she could not prevent her defense from getting stretched apart on a ball from Joanna Lohman that put Lisa De Vanna in on the right flank. Rampone was able to close down De Vanna, but in the frenetic action the defense was mostly out of position when the ball came to Sanderson 20 yards out. Her well-placed shot beat Loyden low inside the left post.

Naeher had a strong game in goal for the Breakers, making several impressive saves to preserve the win. By the time Sky Blue finally scored again on Nick’s header from a Katy Freels corner kick, it was too late.

The teams will meet again Saturday night at Yurcak Field, but in another schedule oddity, Sky Blue (0-1-2, 2 points) will host the Reign midweek while the Breakers (1-2-0, 3 points) will enjoy a full week of preparation.