Watching from high above Yurcak Field last Saturday, there was a moment early in the match that told a lot about this year’s Portland Thorns FC.

Defensive midfielder Amber Brooks had just dropped in defensively alongside center backs Nikki Marshall and Emily Menges to provide cover as Courtney Niemiec and Rebecca Moros pushed high up their respective flanks. Then the home side, Sky Blue FC, switched the point of attack, and Brooks was 40 yards upfield, pressuring the ball that had just swung wide.

It was aggressive, confident and surprising to see the club’s holding midfielder pulled that far high and wide – but it was by design. Paul Riley has Portland playing in what’s more appropriately described as a system and a style than a formation. To put numbers on it – a 3-5-2, a 4-4-2 with outside backs as wingers – would almost be a disservice.

The only constant is that the Thorns typically defend with three, often requiring Brooks to drop in and cover as Moros and Niemiec push forward. That puts a lot of the defensive onus on Marshall, who is without the injured Rachel Van Hollebeke to complement her.

“That was my first thing – get Nikki back here and get her in the middle, because she’s so athletic in the back,” Riley said of why he wanted to bring back Marshall, waived by the club days after winning the championship in a salary cap move. “We’re tough to beat over the top.”

It’s a style that the Thorns are still ironing out, and one that will likely yield high-scoring games, something that could be on tap this weekend.

On Saturday, the Thorns finally get a home game after playing their first two matches away from Portland, and they’ll do so against FC Kansas City in what is the closest thing to a real rivalry the NWSL has in its sophomore season. Last season these two teams produced 19 goals in four meetings, including Portland’s 3-2 extra time semifinal victory.

FC Kansas City coach Vlatko Anodovski’s side finds itself amidst a different sort of change. While the Thorns have upped the tempo and emphasized a more aggressive attack than last year under Cindy Parlow-Cone, FC Kansas City has switched from a 4-2-3-1 formation that produced the most entertaining soccer in the league to a more straightforward 4-4-2. 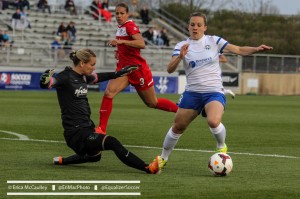 Much of that change was by necessity for the Blues, who lost two critical defensive pieces in Canadian defender Lauren Sesselmann and countrywoman Desiree Scott, who brilliantly held down one of the two defensive midfield slots. Andonovski says he isn’t set on the 4-4-2 – and the 4-2-3-1 is even still at play, which could see rookie Jenna Richmond slide into Scott’s old role – but the offseason acquisitions he made forced a change to the system.

The Blues are off to a slow and less inspiring start this year with their new look, having taken only 1 point from their opening two matches. They have two goals – both scored by newcomer Amy Rodriguez – while Lauren Holiday and Erika Tymrak are still trying to re-establish the connection that earned them MVP and rookie of the year, respectively, in 2013.

Whether the 2013 NWSL Coach of the Year sticks with his new system or not is unclear, but he knows his opponent’s quality on Saturday is guaranteed.

“One thing we know for sure is that Portland is going to be well-structured and organized. The first and biggest challenge for us is going to be to stop Sinclair,” said Andonovski, proceeding to list the entire spine of the Thorns squad as players to watch.

“When you put all that together with the structure and guidance that comes from Paul, nothing is going to be easy.”

For Portland, the game is about finally getting a chance at a clean slate after a disappointing 5-4-2 record at home last season. The Thorns get their banner and their championship rings before the match, but they’ll also get the chance to prove what they have talked about all offseason: that they have to be better at Providence Park, where they expect to win another championship.

As Riley has preached for almost a week, it’s time for Portland to take its progress and turn it into a complete performance at home.

And geography aside – Portland vs. Seattle has the potential to be a big deal this year with an improved Reign team, but there was little extra spice to the matchup last season – Portland and FC Kansas City should produce early-season fireworks.

“I can’t say that there is something extra, but…It feels like every time Portland and Kansas City play, at least we have a good show for the fans” FC Kansas City coach Vlatko Andonovski said.

VIDEO: Solo moving on from ’13, excited for Reign
Canada U-17 coach Priestman looks toward future