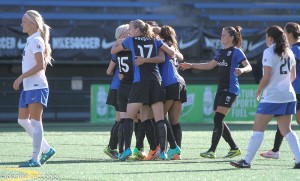 Seattle Reign FC won Wednesday’s match convincingly with goals coming from Kendall Fletcher, Keelin Winters, and Jess Fishlock in a 3-1 decision over the Washington Spirit. So far, the Reign are living up to expectations created by head coach Laura Harvey’s offseason rebuilding. The visiting Spirit showed they are still a work in progress.

Seattle got on the board less than two minutes into the contest. The Spirit conceded back-to -back corner kicks both taken by Nahomi Kawasumi. Harris was able to push the first over the cross bar but she couldn’t thwart the second. The subsequent corner was taken short. Jess Fishlock sent it into the box and Kendall Fletcher volleyed past Ashlyn Harris for the lead.

Keelin Winters extended the Reign’s lead in the 49th minute off another corner kick from Kawasumi. The Winters’ goal was set up by a terrific effort from Kim Little to earn a corner, beating two Spirit defenders by herself.

After subbing on Veronica Perez and Lori Lindsey, the Spirit offense showed signs of life. In the 72nd minute, Washington got one back when Fletcher was called for a handball in the box. Diana Matheson stepped to the spot and converted her league-leading 3rd goal of the season.

Fishlock scored the only goal from the run of the play in the 80th minute. The Spirit gave Fishlock too much room and she drove a hard, low shot past Harris.

The Reign (2-0-0, 6 points) are now at the top of the table and will host the Houston Dash on Sunday to complete their season-opening homestand. The Spirit (1-2-0, 3 points) face another daunting road match Saturday night in Chicago.

Spirit’s Weimer out for season with torn left ACL
VIDEO: Solo moving on from ’13, excited for Reign