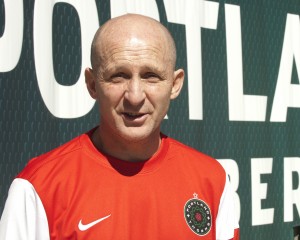 PISCATAWAY, N.J. — Paul Riley walked into the locker room at Yurcak Field on Saturday and wrote a simple message on the whiteboard: ‘Progression, not perfection.’

The Portland Thorns FC coach preached that in the buildup to Saturday’s road game against Sky Blue FC, and he sung his players’ praises after they gutted out a 1-1 draw despite a flurry of late chaos that included a stoppage time penalty kick against them that went unconverted.

“All week we talked about a progression, not a perfection,” Riley said. “That was our thing to the week. You’re never going to be perfect, especially on a field like this, so to progress and at least get a point out of it…we’re happy with all the traveling we’ve done to get four points going home.”

The defending champion Thorns opened the season with a road win over the expansion Houston Dash on April 12, but the performance wasn’t pretty. Some of the frustrations of last year’s Thorns team carried over into the opener despite a largely overturned roster and new coach. Riley admitted the opener wasn’t the best performance, but the 50-year-old Englishman was happy with his team’s showing on Saturday.

“We had better possession last week than Houston, but this week we had a lot of possession,” he said. “Just that final ball, that final pass, that final shot – I think that is part of chemistry and just finding the timing. The timing’s just a little bit off.”

That chemistry is something that has been a challenge for a would-be star-laden team that is dealing with injuries and waiting for the arrival of some key players. Forward Alex Morgan hasn’t played a competitive match since November. Australian defender Stephanie Catley and 2011 WPS MVP Veronica Boquete won’t join the team until late May — Tobin Heath slightly later — and defender Rachel Van Hollebeke’s injury with the U.S. two days before the NWSL season began threw a wrench into the plans. Van Hollebeke is the team’s defensive anchor at center back, and Riley plays a self-admittedly risky system, defending with three.

“It’s hard. Obviously we knew Alex was going to be out to start the season, and for Rachel to get hurt with the national team unexpected is a huge loss for us,” Thorns forward Christine Sinclair said. “Just very proud of our team the way we responded, to replace a national team player that has a hundred and whatever caps with a rookie – Emily (Menges) has done incredible back there.”

Menges has done well to fill in for Van Hollebeke at center back, an unexpected move that forced the No. 25 overall pick out of Georgetown to spend her spring break in Portland getting ready for the Sky Blue game. Menges returns to school for the beginning of the week before flying to Portland on Thursday night ahead of the Thorns’ home opener vs. FC Kansas City on Saturday.

“We didn’t even know what to expect out of Emily because she hasn’t been here; she’s been in school. She did great,” said Thorns midfielder Allie Long, who has scored both of the team’s goals thus far this season.

Now Portland heads home, where they’ve talked about for the last eight months. They want to be better at Providence Park — they were only 5-4-2 at home last year in front of crowds (13,320 on average) that tripled the rest of the league. The Thorns said all season — somewhat presumptuously — that they want to win this year’s championship on home ground.

“Next week we’ve got to perform. We’ve got to be at our best next week,” Riley said standing on the familiar grass of Yurcak Field, looking forward to his first match in Portland this Saturday.

Now is when progress needs to start growing closer to perfection for Portland.