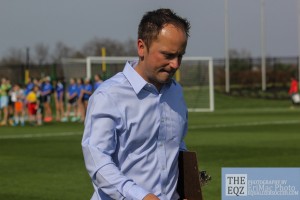 Washington Spirit coach Mark Parsons ripped into his team's performance on Sunday against the Flash. (Copyright EriMac Photo for The Equalizer)

BOYDS, Md. — Washington Spirit players should know what to expect when they arrive for work on Monday. Mark Parsons will save discussions about tactics, giveaways, and all else physical until he hammers home his main point.

“The mentality when that second goal went in is not acceptable,” the Spirit coach said after his team’s season-opening 3-1 loss to the Western New York Flash on Sunday.

Washington had just knotted the match 1-1 when, just four minutes later, the Spirit let Brittany Taylor loop around the back to receive Vicky Losada’s free kick for a tap-in. And then Parsons saw shoulders start to slump.

“There were too many people on the field saying ‘ah here we go again,’” Parsons said, dropping his own shoulders to force home his point. “No. That was last year. That was when we had a different group of players, when we had different preparation. We’ve had time together. We’ve had great time. We’ve looked good, we’ve looked sharp, we’ve looked sloppy. We’ve had good highs and lows.
But that mentality is not acceptable and we’re going to hit that straight away (Monday).”

Make no mistake: This version of the Spirit is going to be better than last year’s, when they finished 3-14-5 and in last place. It would be tough to get much worse, but opening day brought some signs of things to come. Yael Averbuch showed she can be a calming influence in midfield. Jordan Angeli came off the bench after three years recovering from knee surgery. And Jodie Taylor showed her mettle as a forward who figures to be a problem for opposing defenses.

“In the first half, Jodie Taylor I think was terrorizing them,” Parsons said.

The problem was that most of the positives showed in the first half, and almost none in the second, particularly after Brittany Taylor’s goal.

“I walked in at halftime and just said, ‘Guys we could have been 10-nil down last time we played New York,’” Parsons said. “’We should be 3-1 or 4-1 up.’” (Parsons is not exaggerating. The Flash’s 3-0 victory over the Spirit last July was perhaps the most lopsided match in the league last season.) But the second half that mentality is not acceptable.”

Parsons sounded almost matter-of-fact about his team not capitalizing on what he called “a lot of mistakes” by the Flash. He seemed solely focused on the negative body language over the final half-hour and he remains bullish on his side.

“We’ve got so much ability and quality. We’ve got the ability to break anyone down and stop anyone. But when people don’t believe it and their body language shows it, (I’m) not going to be happy at all. And when things aren’t going well and you don’t believe it you go back to bad habits.”

He went on to remark about how well the Spirit took several of the Flash’s attacking options away—Losada being the notable exception—while at the same time commending his opponent for staying the course after surrendering an own goal early in the second half.

“I think (Losada) was the difference throughout the game. A lot of their big players we kind of kept them quiet. But when we scored 1-1 did it affect them? No, they’re ready to do their thing.”

The coaches are not exempt either.

“We’ve got to put accountability on some of the players to say this is about you believing,” Parsons said. “But we’ve also got to help with that culture. We’ve got to raise expectations and push people through some tough stuff throughout the week so when it gets out here it feels a bit easier.”

Parsons did single out one player for her performance under pressure.

“What Christine (Nairn) did today, we’ve worked hard to bring a squad full of that to play under pressure. Where other people might be hiding, Christine was going to be the person to go get on it and the person to be the one stretching people.”

While Parsons’ comments might sound like ones from a frustrated coach, the reality is Parsons is anything but—for now.

“We’re a different beast this year. I’m really, really excited about what we can do. But got to improve the mentality and show some resistance.”