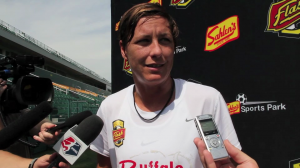 Abby Wambach will miss the Flash's season opener with a broken bone below her eye.

Abby Wambach will miss the Western New York Flash’s season-opener vs. the Washington Spirit on Sunday due to a fractured orbital bone below her left eye. She suffered the injury in Thursday’s 3-0 USA win over China.

Wambach entered the game for Morgan Brian at halftime. Both Wambach and midfielder Carli Lloyd flew directly from San Diego to Washington, D.C., for Sunday’s NWSL opener. Wambach’s injury was confirmed after arriving in Washington.

Western New York lists Wambach as day-to-day. The Flash next play on Saturday on the road against the Chicago Red Stars.

Meghan Klingenberg also reportedly returned to Tyresö with and injury after playing for the U.S. in San Diego.

Long: ‘We were lucky to get away with 3 points’
Solo backs Ellis for full-time US women’s job