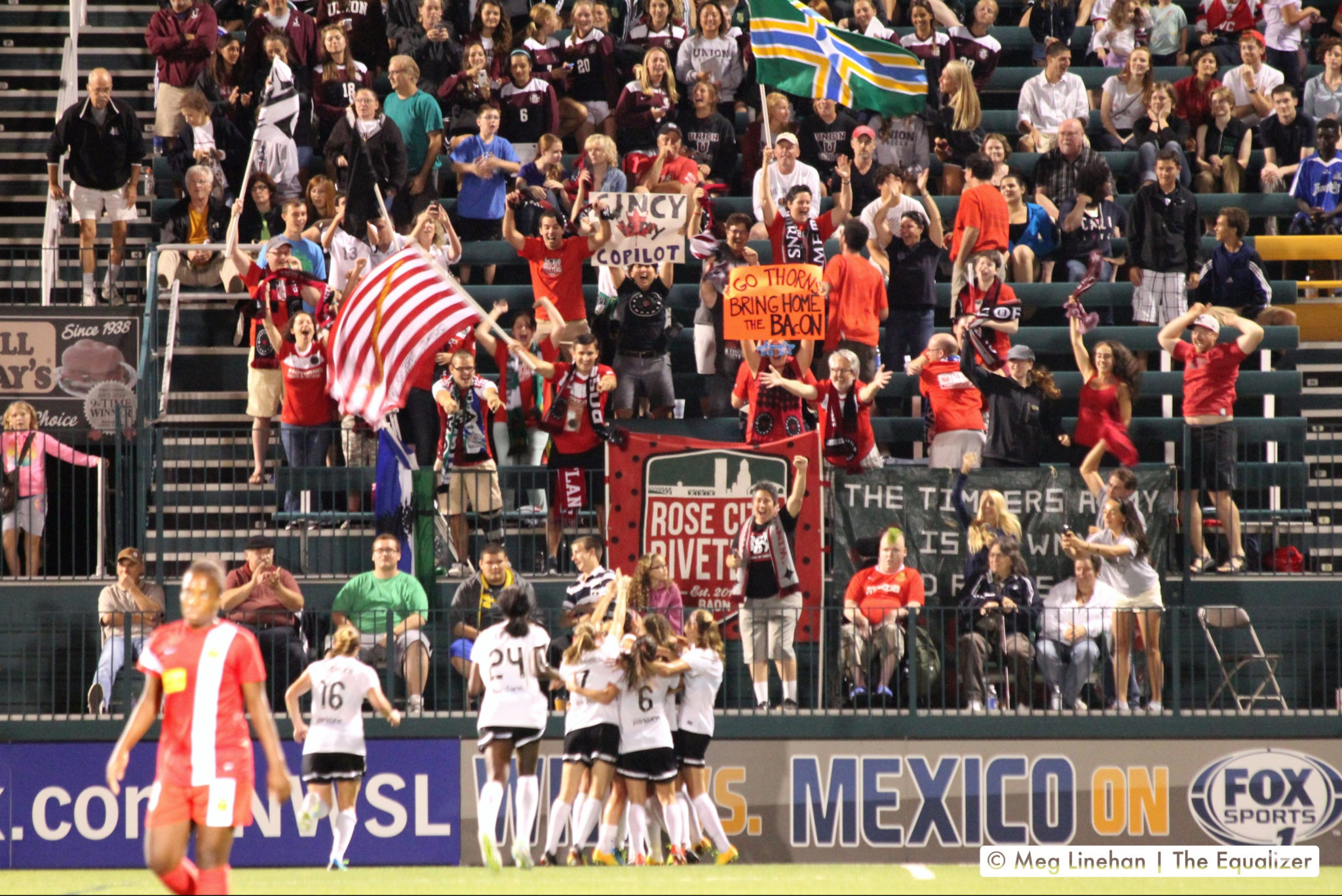 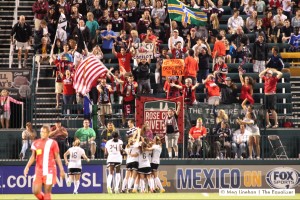 When last seen the Thorns were celebrating the NWSL title with some of their traveling fans. Their defense begins Saturday night in Houston. (Photo copyright Meg Linehan for The Equalizer.)

This is a landmark match for NWSL as the Dash join as the 9th team and have already sold more tickets than they were hoping and will open select sections not initially expected to be filled. The Thorns will be opening the defense of the inaugural NWSL Championship and they will be doing it without Rachel Van Hollebeke, who hurt her ankle playing for the U.S. during the week. Of note, both coaches, Paul Riley and Randy Waldrum, have been mentioned as candidates to become the next U.S. national team coach, and both said Tuesday they could envision splitting club and country duties on a temporary basis.

What to watch for: Both teams will look to play aggressive, high-pressure soccer. The Dash could have an edge in midfield if Brittany Bock and Becky Edwards are on their games, but the closer play gets to the boxes, the more the advantage swings to the Thorns.

This would have been last summer’s consolation match after these teams dropped semifinals in very different fashion. FC Kansas City opened a 2-0 lead on the Thorns before becoming the first NWSL team to lose a game after leading by multiple goals. A few hours later a depleted Sky Blue club was throttled 2-0 by the Flash. Both sides have had mixed fortunes over the winter with Kansas City losing Desiree Scott but bring in an array of forwards while Sky Blue lost Lisa De Vanna, Danesha Adams, and Brittany Bock but managed to keep their quality defensive unit intact.

What to watch for: Ashley Nick’s ability to contain Lauren Holiday will be a key factor for Sky Blue FC, who were burned repeatedly by the league MVP in two of their three meetings last season. On the flipside if rookie Jenna Richmond starts in a dueling, defensive mid setup, look for Sky Blue to test her side of the park.

The Flash begin defense of their regular season title against the club that managed only three wins and 14 points in 2013. The Spirit will be vastly different this season and likely much better as well. If Jordan Angeli plays it will be her first competitive action since she tore her ACL playing for the WPS Breakers three years ago. The Spirit could also unveil Yael Averbuch and Jodie Taylor, among others. The Flash are again a work in progress on the back line, but a similar position this time last season saw them blossom into one of the league’s best.

What to watch for: Last year the Flash were at their best when they widened the pitch. That could mean some immediate challenges for No. 1 overall pick Crystal Dunn as well as the Spirit’s outside backs. All eyes should be on the Spirit though who believe they will contend for a playoff spot after making over the roster in the mold of coach Mark Parsons.

After months of adding quality players to the roster the Reign finally get to strut their stuff against another NWSL club. Kim Little is questionable after playing 90 minutes for Scotland on Thursday, but the Reign come into the new season loaded and healthy. The Breakers will have to wait to debut Kristie Mewis, out with a sprained ankle after not missing a match through injury in 2013 when she played for FC Kansas City.

What to watch for: Both teams are something of a mystery in how they’ll play as both added numerous pieces over the winter. On paper it appears the Breakers will be most effective getting the ball wide for their speedy flank players to work their magic. Centrally they are still scrambling to replace Kia McNeill in central defense. And the Reign have more than enough strikers to make them pay, including former Breaker Sydney Leroux.