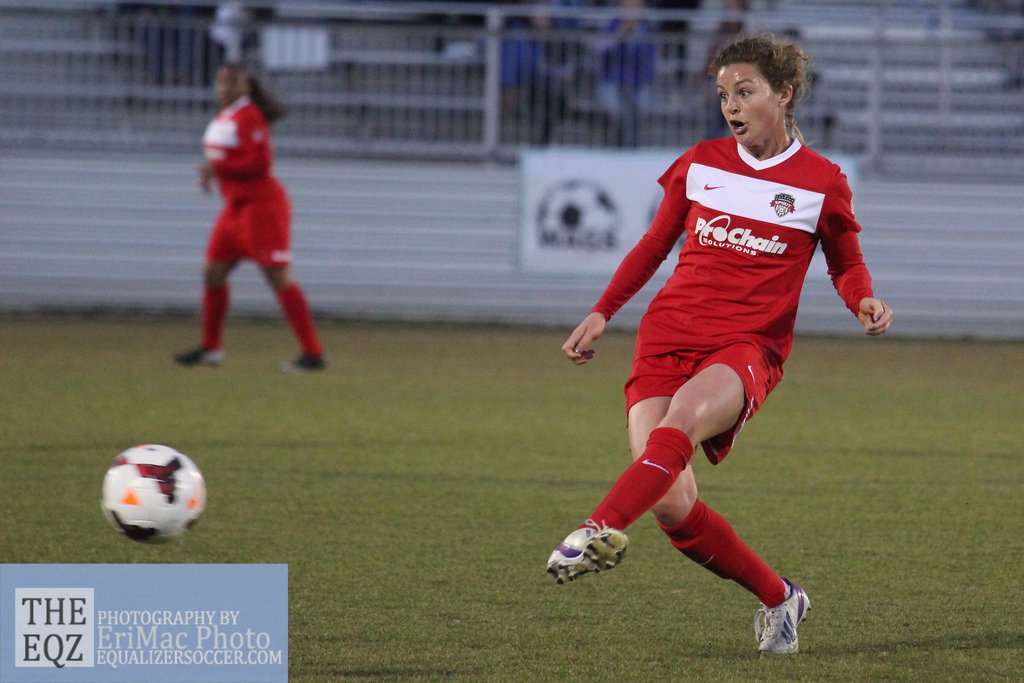 Jordan Angeli is ready to play professionally for the first time in three years after a long ACL rehab. (Copyright EriMac Photo for The Equalizer)

BOYDS, Md. — One thousand one hundred days. On Sunday, that’s how long it will have been since Washington Spirit midfielder Jordan Angeli was available to play in a professional women’s soccer game. On April 9, 2011, Angeli torn her anterior cruciate ligament (ACL) in the season-opener for her then WPS team, the Boston Breakers. Last week, Angeli signed a contract with the Spirit and this weekend she may see her first professional action in three years.

Angeli’s ACL injury in the Boston Breakers’ opener was the her third. She suffered the injury twice while playing at Santa Clara. She felt with the first two injuries she didn’t have chance to process what had happened and heal properly.

“When I initially got hurt the first couple of times, you’re in a system in a school. You get pushed back and we have a drive as athletes to get back as quickly as possible,” Angeli said.

This time around Angeli took the time to heal physically — and mentally as well.

“I needed to make sure that I’m me before I do anything…Every second (of my recovery) was necessary and I feel like I am different out on the field now because of the healing I allowed myself to have.”

[MORE: Angeli on the long offseason…and the long road to recovery]

While Angeli was recovering, the league she had previously played in folded and she was drafted by the Spirit in the third round of NWSL supplemental draft in 2013. She spent a few weeks training with the squad last summer but wasn’t ready to return. Now Angeli is ready to suit up once again.

Angeli could be a great asset to a team looking to rebound from a disappointing season. As a WPS rookie in 2010, she scored seven goals for the Breakers, all but one coming in the second half the season.

“She’s a great person and a great player and we’re working to get her where she needs to be,” Spirit head coach Mark Parsons said. “We’re very confident she can have a major role for us and a major role in this league.”

What will Angeli feel when she suits up and walks onto the pitch Sunday for a moment she didn’t know would ever happen again?

“I feel so blessed I really do…I know that everything happened to me because of something that’s going to happen to me in the future and this is just another little step that’s leading me on that path. So, I’m going to thank God and I’m going thank my family who is going be here…It’s going be the greatest moment.”