Fool me once, shame on you. Fool me twice? Well, that’s what Sky Blue FC hopes for this season.

Entering the inaugural NWSL season in 2013, Sky Blue FC was viewed as a mid-table team, with many citing their lack of proven stars as a reason the New Jersey-based club would struggle.

But they went to the top of the table with a shocking 1-0 victory in Portland on May 17 and sat in first-place for over two months. A mid-July scoring drought that stretched over three games hampered Sky Blue’s efforts to secure a home playoff game, and they instead drove north to Rochester, N.Y., losing to the Flash in the semifinals in a game they never really stood a chance in due to injuries.

This year, Sky Blue is once again in an underdog role, having watched other teams around the league make splash signings or land coveted allocated U.S. players. But Sky Blue coach Jim Gabarra isn’t interested in the hype.

“If people didn’t think that we were top of the table kind of team last year – I think we proved that we were,” he said. “That’s fine, I understand you make all these big moves and big signings, which is great for the league, but at the end of the day, you still have to play the games.”

Gabarra said he expects goals to come from several players, similar to last year. Monica Ocampo led the team with eight goals and midfielder Sophie Schmidt had seven. Lisa De Vanna, now a Boston Breaker, scored five but was the main spark to the offense. Some younger players – along with Japanese international Nanase Kiryu – will have to step up to fill the void.

“There are quite a few players that we invested in last year that are coming into their second season, and they are still young players and they are still learning,” Gabarra said. “But it’s been my experience that the second year is a real big step for these players that are maybe coming out of college or international players who have got to get used to the grind.”

Adding to Sky Blue FC’s challenge of getting off to a fast start is, of all things, the weather. Gabarra said that as of last Friday, the team had only had about seven training sessions outdoors due to Northeast climate and field conditions. Boston had some similar issues, while the Western New York Flash have the luxury of a full-sized indoor field to train at regularly.

Defensively, Sky Blue is once again sound, starting in net with the option of Jill Loyden or Brittany Cameron, both of whom have recently been in U.S. camp (Loyden regularly). It’s very possible that they could end up sliding in and out of the starting role throughout the season, depending on form.

Christie Rampone is back to anchor the defense – though she was sent home from U.S. camp this week with a toe injury – alongside CoCo Goodson. Foord is an option at right back, but so too is U.S. international Kelley O’Hara. Kendall Johnson has impressed again in preseason on the left side, and Camille Levin — who was just fully cleared after a hamstring tear some nine month ago — should fill a holding midfielder role but can also slide into any spot on the back four in a pinch.

This team, just like last year, has to score by committee. There will be some pressure on Kiryu to fill the void left by De Vanna, and Ocampo will have to be more of a 90-minute player to build upon her eight tallies last year.

“Really we’re looking at a balanced scoring,” Gabarra said. “We’ve got Sophie and Monica coming back and we’ll expect some more goals from (Katy) Freels. I think she was pretty unlucky and probably could have had five or six goals last year as well. I think it will be kind of a balanced scoring attack again.”

If Ocampo or Schmidt drop off from last season’s production, it could be a long season in New Jersey. One interesting twist could be the use of 19-year-old Australian Caitlin Foord in a more advanced winger role instead of at right back, where she played in 2013.

Sky Blue will absolutely play an underdog role once again in 2014, but Gabarra seems alright with that. Despite the late-season dip in form last year, Sky Blue finished on 36 points, two behind the three-way tie for first (and they nearly made it a four-way tie but for a draw on the final day of the regular season at Washington). Expect Sky Blue to once again be in a fight for that last playoff spot. 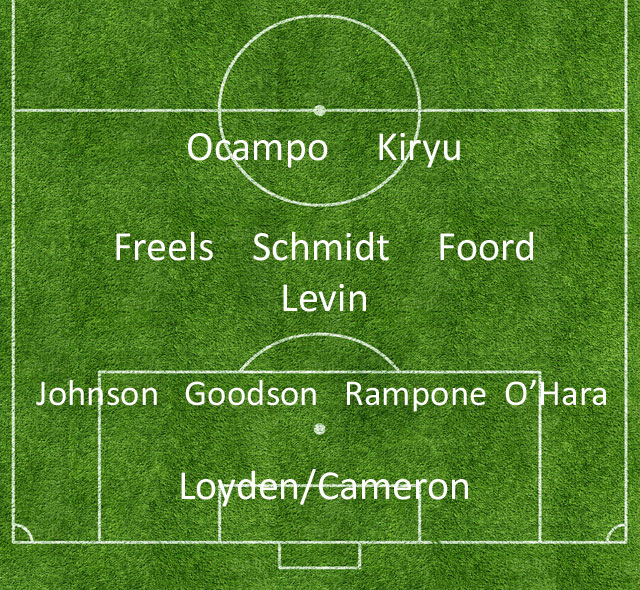