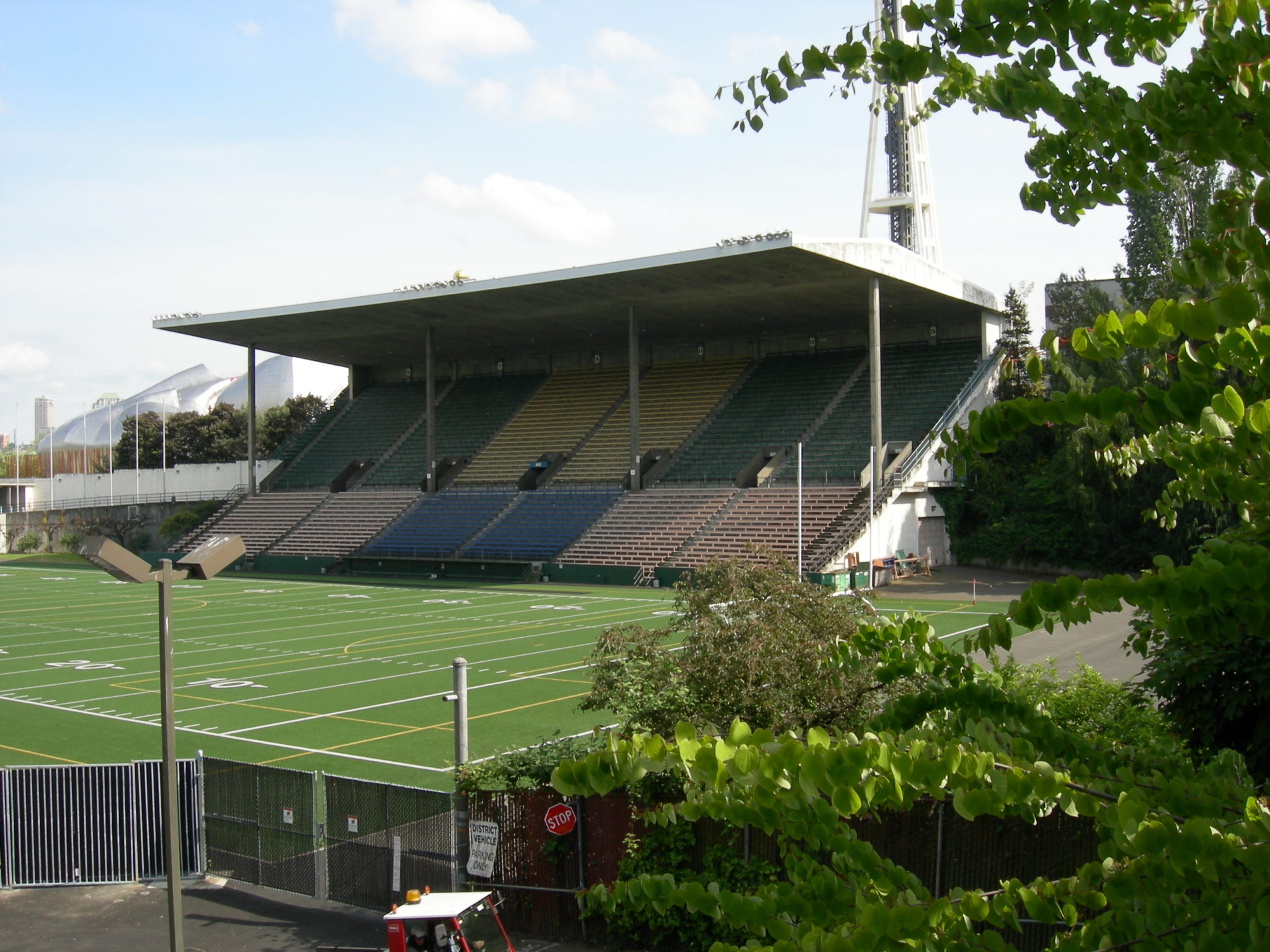 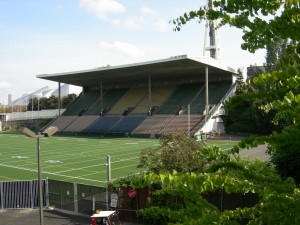 Seattle Reign FC’s move to Memorial Stadium — on the site of 1962 Seattle World’s Fair near downtown — from the Starfire Soccer Complex in suburban Tukwila (near the Seattle-Tacoma International Airport and a good 40 minute drive from central Seattle) is an important step for the franchise that had a lackluster 2013 season—on and off the field.

The shift of stadium will provide the Reign with a fresh start and help differentiate the side from the Sounders Women W-League franchise, which also plays at Starfire, as the existence of two women’s teams at the same stadium confused some fans last season. Though independent of the MLS men’s side, the W-League Sounders had the advantage of a 40-year old brand, and some people last season had difficulty figuring out which team was major league (NWSL). A women’s team executive who is entrenched in the soccer market explained that, once the Reign decided not to merge with the Sounders Women ahead of their first season, they always had an uphill battle establishing themselves as the “professional” women’s team as opposed to the largely amateur, summer league Sounders Women.

Further complicating the situation is that in 2012, which was a gap year for women’s professional leagues after WPS folded, the W-League Sounders Women attracted 4,329 fans per game, almost ten times the league average of 442. The Sounders Women drew sellouts to Starfire with U.S. national team stars Hope Solo and Alex Morgan leading a star-studded lineup ahead of their Olympic Games-winning summer.

[Team-by-team previews of the 2014 NWSL season]

In 2013, the two sides divided 80 percent of the average crowds from the year before. The Sounders Women drew an average of 1,090 per game, while the Reign attracted 2,306. The Sounders trailed only the Washington Spirit Reserves (2,037 fans per game) among 25 W-League teams in 2013, in which the league 303 per games. Forward Sara Campbell, who played for the Sounders Women last season and trialed for the expansion Houston Dash this spring, pinpointed the problem when there are two teams in one market, despite Seattle being “The mecca of soccer,” as she calls it.

“When you have two clubs, both clubs are great because we have so much support in Seattle, but I think a lot of fans were very confused about which league which team was in,” Campbell said. “The Sounders name is obviously the most recognizable name thanks to the men; however most people didn’t understand that the league we were playing in essentially was sort of a step down playing-wise for the speed of play. None of our players are getting paid in the W-League versus the NWSL top league, [where] a lot of those players are at least making a little money playing.”

Though Memorial Stadium is 67 years old (opening in 1947), it is located on the Seattle Fair grounds, the site of the 1962 World’s Fair that forever changed the face of the city. The Sounders men of the original North American Soccer League played their first two seasons at the artificial turf stadium (1974-1975), attracting 12,132 fans to their first ever league game, with their smallest crowd totaling 11,282 that first year.

After expanding the stadium to 17,000 for year two, they averaged 16,818 with a season low of 14,252. The Sounders needed a bigger home and thus moved into the 50,000-plus seat Kingdome in 1976, christening the stadium with an exhibition match against the Pele-led Cosmos. Memorial again hosted the Sounders for a few years when it was in a variety of minor leagues, such as the Western Soccer Alliance and A-League/United Soccer Leagues, after the collapse of the original NASL in 1984.

The Sounders certainly galvanized the soccer market when the league expanded to the Pacific Northwest in 1974, but there was already a significant soccer base in the community. On May 9, 1969, High School Memorial Stadium (as it was then known) hosted Kilmarnock of Scotland and West Ham United, who were playing on behalf of NASL sides in 1969 (Kilmarnock for St. Louis Stars and West Ham for Baltimore Bays), when the league only had 5 teams. The coach of West Ham was future English manager Bob Greenwood, who coached the Three Lions from 1977 to 1982. The crowd of 7,764 outdrew the Seattle Pilots and Washington Senators baseball game that evening (7,148). Later in the summer, Seattle Wolves—a team put together at short notice—beat Wolfsburg Goettingen SC of West Germany 3-1 at Memorial. The Wolves imported a few Canadians who would go on to play with the Vancouver Whitecaps in the NASL when that franchise also began in 1974, including Glen Johnson and Buzz Parsons. The Seattle Post-Intelligencer summarized the impact of the game: “This Wolves club was the most powerful club to ever represent Seattle in a game of this importance.”

Real Madrid, Manchester United and other top clubs have toured Seattle in the past decade, and Century Link Field (formerly Qwest Field and Seahawks Stadium) hosted Gold Cup and U.S. international matches since it opened in 2002.

On the women’s side, there have been comparatively few national team games held in the area. In 2002, CONCACAF Women’s Gold Cup doubleheader matches were staged on Nov. 2, where the U.S. defeated Panama 9-0 in front of 21,522 and four days later when the U.S. defeated Costa Rica 7-0 before 10,079. Other matches in that Gold Cup tournament were held in Victoria, British Columbia, and at Fullerton and Pasadena in California. The tournament doubled as the Women’s World Cup regional qualifiers for 2003. The American women also played in nearby Tacoma at Franklin Pierce High School in 1995 and sent Brazil away with a 3-0 loss in front of 3,291.

The move to Memorial should be good for the Reign. The 2013 season can pretty well be written off as poor at the gate, with a home attendance of 2,306 for sixth, but the market is soccer-savvy and they will come out for a competitive team. The Reign will use the North Stand at Memorial to start, which holds approximately 6,000 fans.

Besides the stadium move, the team is conducting a supporter’s survey and hosted a high-profile media launch at the top of the iconic Space Needle, which overlooks Memorial.

Seattle stuck with Laura Harvey as head coach despite the seventh place with only five wins and three ties in 22 games.

The addition of U.S. international forward Sydney Leroux—who played with the Sounders Women in 2012—along with attacking midfielder Beverly Goebel, a WPS veteran who played with top Japanese club INAC Kobe, should boost the side. Kendall Fletcher is another WPS veteran who played in Sweden and Australia. The Reign added strong imports Nahomi Kawasumi of Japan and Kim Little of Scotland, to go with returnee Jess Fishlock of Wales. Veteran U.S. internationals Megan Rapinoe and Hope Solo were strong in 2013, when they were able to play.

With 2013 NWSL champions Portland Thorns averaging 13,000 a game, Seattle has the potential to be a strong market and nothing will spark the fans more than an exciting and successful team. The Reign on paper has put that together and should be a favorite to make the playoffs at the end of the summer. A strong Reign team could also position the city of Seattle to host more U.S. women’s international matches in the future.

The Reign will play their first game at Memorial Stadium on the Moda Health Pitch this Sunday at 7 p.m. ET vs. the Boston Breakers.

Tim Grainey is a contributor to Equalizer Soccer. His latest book, “Beyond Bend it Like Beckham” was released earlier this month. Follow Tim on Twitter: @TimGrainey.

NWSL to stream every game on YouTube in 2014
2014 NWSL preview: Portland Thorns FC