NWSL First XI member Jess Fishlock will have a much stronger supporting cast in 2014. (Copyright Patricia Giobetti for The Equalizer)

Among the many things that ailed Seattle Reign FC in 2013, they gave up at least one goal in each of their 22 matches. They enter the new season as the only returning team without a clean sheet, something coach Laura Harvey hopes to rectify sooner rather than later.

“I think we picked up our first clean sheet on Thursday—ever,” Harvey said off the Reign’s preseason victory last week over the University of Washington. “Regardless of who the opposition is, that’s a step forward and we’ve got to keep working on that. And that’s been our focus in preseason, being hard to beat.”

Harvey brought in so many players, and made so many trades during the off-season, that on draft day she posed for photos behind a tee-shirt that read, “HAS LAURA HARVEY MADE A TRADE TODAY?” The Reign added, among others, Sydney Leroux to score goals, Kim Little to help in midfield, and Kendall Fletcher to help tie the back line together. Many of the new additions will help in the attack, but to win Harvey believes they all must defend.

“You’ll hear that of me all season,” she said. “We’ve brought in talent as an attacking threat. But we have to be hard to beat. It ultimately starts with the center forwards. If you’ve got center forwards that work hard when you don’t have the ball, i.e. Lisa De Vanna (of the Breakers), then you’ve got a chance at being hard to beat. It always falls on the back line but I’m always an advocate of the back line because it’s not always their fault. They’ve got to rely on the people in front of them to help them out.

“We’ve worked really hard on that this preseason and hopefully that will be a trend that you’ll see from us beginning with the first game and onwards throughout the season.”

One player that will have to be better for the Reign to keep their opponents off the board is Hope Solo. The keeper had wrist surgery in 2013 and did not make her Reign debut until May 25. Even after that she rarely looked like herself.

“She probably came back too early, which is partly to blame on our part because we wanted her back,” Harvey acknowledged, adding that Solo would agree.

As for this season, Solo appears to be fit and ready to give her best for her hometown club.

“I’ve never seen her as in condition as what she is now,” Harvey said. “She is so invested into what we want and what we want to do moving forward. She is a pleasure to be around, and a great teammate. Having someone of her character inside the locker room is only an advantage.”

Quite simply, the strength of the Reign is their roster and its depth. As one rival coach said, “If you ask me who has the best roster 1 through 20 it’s Seattle.” 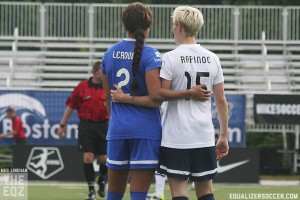 Sydney Leroux and Megan Rapinoe could work wonders up top for Seattle. (Photo Copyright Meg Linehan for The Equalizer)

When the entire 20 is healthy and available Harvey will find herself leaving quality players on the bench each week. It is a far cry from a year ago when Solo and Megan Rapinoe were late arrivals and the team left them too much to do when they got there.

“One of the things we learned last year was we waited around for national team players,” Harvey said. “I think that was a mistake. This year even when we don’t have them around our team is very strong. It has been a great preseason to see how they all mix together and we’ll see how it goes.”

Of course it all has to tie together, and one of the few pitfalls of a quality roster is dealing with national team absences. The Reign will open against the Breakers this weekend having had their full complement of players in tow for only about a dozen days.

“Preseason is always difficult when you have top quality players because you don’t get to see them too much. It’s been good, but we have to get a lot of stuff done very quickly. And the girls who have been here the entire time have been excellent.”

Harvey said her biggest concern is keeping the squad healthy. So far the only injury is to Carmelina Moscato, who has still not trained since injuring her foot playing for Canada late last year.

The backline is deep, but does it make sense? Harvey said Stephanie Cox has come back a completely different player from last year when she came on board late after giving birth earlier in the year. And Kendall Fletcher returns to the States, likely as a central defender. Elli Reed, Kiersten Dallstream, Lauren Barnes, and Kate Deines all return from last year’s team. All played well at times but none are considered standouts.

And while Solo is looking to have a bounce-back season, she figures to miss several matches to play for the U.S. Haley Kopmeyer, who appeared in one game as a rookie in 2013, is the backup and will be called upon to step in.

“She’s come back a lot more athletic and in better shape than she was last year,” Harvey said. “We see her as a long-term solution. When you have a No. 1 goalkeeper like Hope you need a good training partner for her and someone who can be there if anything should happen. We think Haley is the right choice for that. Hope keeps her on her toes on a daily basis, which is great.”

Perhaps the most important off-season happening in Seattle was the decision by Megan Rapinoe to leave Lyon and spend the entire season with the Reign. Her work rate and attacking ability will be tough for opposing defenses to handle, especially with Sydney Leroux and Nahomi Kawasumi — plus Beverly Goebel — running up top to collect her crosses. If the defense clicks this is absolutely a playoff team and maybe more. 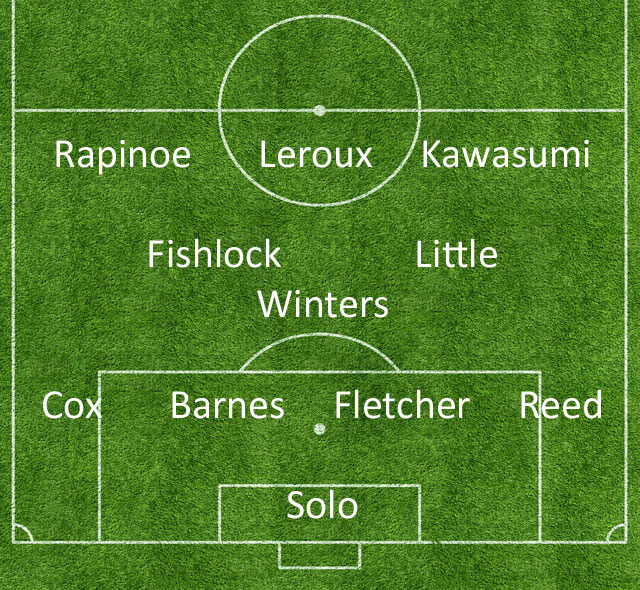